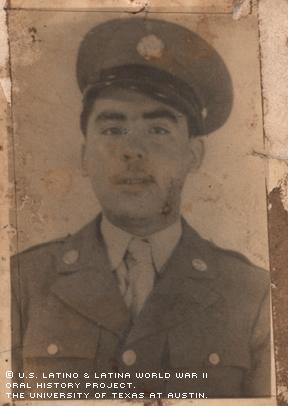 Place of Interview:
Round Rock

For 10 days in 1944, Margarito Correa and nine of his fellow soldiers were lost -- tired and hungry and unsure where to go or what to do. But even in the midst of the chaos, Correa held on to hope, believing his mother's prayers would pull him through.

"In the letters I sent my mother, I asked her to pray day and night for me and I know that it helped," he said.

Still, times were so rough that he was sure he wouldn’t survive.

Eventually, the men were reunited with their unit, Battery D of the 377th Anti-Aircraft Artillery Automatic Weapons Battalion (Mobile). The unit fought in Normandy, the Ardennnes and other parts of Central Europe. When Correa was discharged on Nov. 20, 1945, he’d earned an EAME Campaign Medal with five combat stars, one Bronze Star, an American Theater Campaign Medal, a Good Conduct Medal and a World War II Victory Medal.

"They don't know how I got back with five bronze medals of combat," he said. "Not many got five."

Correa was born in Pflugerville, Texas, a town near Austin, on Nov. 21, 1920, to Catarino Correa and Ramona Acosta Correa. At the age of 7, he began helping his father.

"Like at five in the morning, my dad would wake me up to peel corn cobs to give to the donkeys at night," Correa said. "I would also help him plough with the mules."

Correa’s father worked on a ranch all his life and Correa’s mother picked cotton.

Only finishing the first grade, Correa's education was minimal. In 1939, he began to work in the Civilian Conservation Corps in Burnet, 62 miles northwest of Austin, where he made ditches and earned $30 a month. He kept $5 and sent the rest home, as $5 was enough for him to live on, he says.

"Everything was very cheap, and [the corps] would provide us with food and clothing," Correa said.

After he left the corps, he went to work for the railroad in Pflugerville. Then one morning, as Correa was hammering away, his father came, letter in hand, with the news that Correa was going to be drafted.

"I was never afraid to go. …I wanted to go to another country."

When Correa arrived at Camp Stewart in Georgia, the captain told him his gold teeth might actually endanger his life, as some enemy soldiers might try to kill him for them.

Correa remembers telling him, "'If it's for that reason, then give me a hammer.' I was going to knock them out but they told me not to, and they let me pass."

In seven months at Camp Stewart, Correa says he learned to move on the field, make cocoons and defend himself. From Georgia, he was sent aboard the Queen Mary to England, where he stayed for six months waiting for orders. Correa recalls one particular town, Schneider, being very foggy.

"When we went to lunch, we had to go one behind the other because we couldn't see," he said.

When they were finally transferred to Normandy, Correa got to use his skills as a gunner.

"I protected the infantry," he said. "We would aim at the airplanes and would sometimes hit them. We [manned] the first cannon that brought the airplane to the ground."

On several occasions, Correa came close to being hit by bullets, but he was never harmed. In 1944, on Thanksgiving Day, he and his comrades survived an attack from some Germans that were hidden on a hill.

"We were in a house to rest for four days, when they started shooting and destroyed a corner of the house," Correa said. "We fled to the cellar, and it smelled horrible because of the cow skins that were there.''

Before Correa's battalion crossed the Rhine River, they got trapped in Bastogne, Belgium, where food and gasoline was dropped. The Germans made another attack, however, by dropping leaflets with horrifying images and discouraging words.

"The Germans would drop papers saying, 'You'll never get to see your father again,'" Correa said.

After crossing the Rhine, they made their way to Germany, where they received news the war had ended. They were 50 miles away from Berlin. Correa, however, wanted to fight in Japan.

"Me and three other Mexicans signed up to go fight in Japan, but we received notice that the war had ended." Correa said. "I wanted to go and fight again because I wanted to see how it was over there. I wasn't afraid, I liked it."

After being discharged from the Army, Correa rejoined the work force and labored for limestone companies in the Austin area, using a sledgehammer to break rocks that were thrown into burners to make lime. He toiled at his last job for 32 years.

A first marriage, to Celia Perez in 1946, produced a son before ending in divorce. He later married Eva Salazar. Correa has six children and stepchildren: Ruth, Margarito Jr., Roberto, Pete, Serefino and Josie.

Correa says he got more respect when he returned from the war. For example, while riding on the bus, "they would make the older people stand up so that the soldiers could sit down," he said.

Correa advises young people to go and fight if there is another war. He says he’d go himself if an opportunity arose.

"If there's another war, I would like to go," Correa said. "I have the courage to go again."

Mr. Correa was interviewed in Round Rock, Texas, on August 20, 2002, by Ismael Martinez.