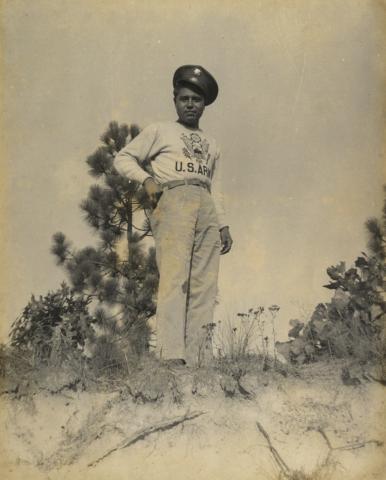 A family man and skilled orator, Margarito Barrientes rarely spoke to his loved ones about his experience in World War II. For the longest time, he kept to himself his recollections of hiding in foxholes and interacting with civilians in the countries where he served.

According to his eldest child, Elia Gonzales, he would sometimes share small snippets of his time in the war, which, she recalled, were always out of context.

Another memory he would mention to his family was how generous the local people were to American soldiers whenever they took over a town in Europe.

One of the gifts the civilians would present the troops was water and soap, which Barrientes said he appreciated.

“We would be out there without water, without being able to wash our hands or face, and it would be days before we could find water,” he told Gonzales. “So if somebody gave you soap, it was a very precious commodity.”

Barrientes enlisted in the Army on June 10, 1940, at Fort Brown, Texas, and was assigned to the 657th Field Artillery Battalion. According to his military discharge papers, he reached the rank of staff sergeant and served in northern France.

Barrientes was born Feb. 22, 1919, in Victoria, Texas, to Merced Barrientes and Camila Torres. He was the fourth out of eight children and grew up in San Benito, Texas, 140 miles south of Corpus Christi, Texas.

Upon returning to San Benito after the war, in 1945, Barrientes attended barber school in Corpus Christi. After obtaining his license, Barrientes went back to San Benito and worked as a barber at Amaya’s Barber shop on Robertson Street. He usually spent his lunch break at a café next door.

Barrientes married Alejandra Delgado in September 1957, and they had four children.

Barrientes was known in the San Benito community as a great orator. He performed in local plays and was a lector in the Catholic church. He was asked frequently to speak at funerals and family gatherings. In addition, Barrientes was active in the Knights of Columbus and held office in the Catholic War Veterans.

He was also a family favorite, dearly loved by his nieces and nephews. He was often asked to be a padrino at baptisms, weddings or quinceañeras.

“A lot of my cousins had commented that he was their favorite uncle,” Gonzales said. “He was known to be a very wise person and very helpful and committed to others.”

Barrientes passed away in San Benito on Oct. 30, 1984. He is survived by his four children: Elia Gonzales, Esther Barrientes, John Barrientes and Michael Barrientes.

Tribute based on information provided to Voces by Elia and Cecilia Gonzales, daughter and granddaughter of Margarito Barrientes.