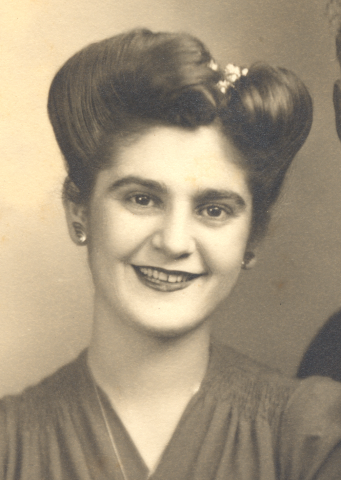 María Isabel Solis Thomas remembers the day as if it were yesterday: She and her sister, Elvia, are standing on a dock at a Richmond, Calif., shipyard, waving goodbye to sailors boarding American ships destined for battle during World War II.

Thomas recalls a young sailor asking for one of her tiny cross earrings. Not one to part easily with any of her jewelry, Thomas remembers Elvia’s shock when she gladly removed the earring and gave it to the sailor as a going-away memento -- even though she’d never see the sailor again.

Elvia was just as astonished when the sailor's friend approached and asked:

"How 'bout the other one for good luck?" and young Isabel obliged him just as willingly.

Thomas recounts the scene as a lighthearted moment in the midst of a time when the entire world seemed to be fighting. Decades later, at 80, she looks on her acts of charity as simple measures meant to comfort men going off to war.

But the Solis sisters' support for the war effort went far beyond the farewells at the docks that day. As a little girl, Thomas dreamed of becoming a teacher or nurse, but money and the war altered her and her sister's dreams.

Instead, when the war broke out, both volunteered to become "Rosie the Riveter" welders, welding pipes and repairing cargo ships by the war's end with women of all races from all over the country.

"It [the war] was in full force," Thomas said. "And that's why they needed us to go and help them to build these ships to get them out, because they needed the ammunition, the food and they needed to transport these boys where they had to go."

Thomas says recruiters wanted women who were small, short and thin for crawling into dangerous places in the ships. She worked nine-hour days, six days a week, striking and sealing steel rods with precision and purpose.

"I was so proud because, man, I did it just exactly the way they wanted [me] to," Thomas said. "And here I come out, and they said, 'Hi, Shorty. You did pretty good."

Not only did she love the Navy and the work; she also loved the camaraderie. Among other activities, Thomas remembers trading clothes and sharing soap.

"We shared with the girls in the dormitory as if it were one big, happy family," she said.

Thomas met Italian American and Portuguese American women for the first time: She assumed they all spoke Spanish because of their facial features. Her sister quickly suggested she not insult the other women by assuming they were Mexican.

Thomas also recalls comforting an African American mother who was thinking about "her boys" away at war. Thomas hugged and kissed the woman, who asked in surprise:

"Where did you say you're from?"

"We come from Texas," replied Thomas, to which the young mother replied:

"You shore different from those Southern gals."

During those war years, young Thomas and other women attempted to break down discrimination barriers by not caring about race or creed.

"We treated each other as good friends," she said. "Black, white, yellow -- it doesn't matter your color, your creed, your religion; we're all the same."

Thomas was born in Veracruz, Mexico, in 1924, one of nine girls and one boy born to Telésforo Solis and Marí¬a Del Refugio Gomez Solis. Telésforo worked for an American oil company in Tampico, Mexico, while Marí¬a was a housewife.

"We were not rich ... we were poor," Thomas said. "But we never lacked of anything, thanks be to God. Papa had a good salary."

The Solis family moved in 1929 to Brownsville, Texas, where Telésforo worked as a bookkeeper before the war and later as a toll collector at the International Bridge between Brownsville and Matamoros, Mexico.

"We were very united," said Thomas, who recalls being especially close to Elvia, who has since passed away. "She and I were not only sisters; you could say we were very close friends."

A devoted Christian, Thomas learned early in life the value of family unity. She remembers the Depression era as a difficult time when she shared everything with her eight sisters, including a single set of roller skates.

Thomas also recalls experiencing discrimination as a youth, even from people of her own ancestry. For example, she remembers a Mexican American teacher once telling the class that no matter how much Mexican American girls applied themselves, they’d never be able to accomplish anything more than being housekeepers.

Thomas says she seldom experienced discrimination after marrying James A. Thomas, a Navy sailor who fought in the South Pacific in 1944. She says James, an Anglo, shocked her parents when he asked for her hand in marriage. Her parents were devout Catholics, and James Thomas was Methodist. Her parents had no idea they’d been dating; Thomas had only dated Mexican Americans previously.

A few weeks later, they were married in Santa Cruz, Calif. Eventually, all nine Solis sisters would marry military men.

After she was let go from her job at the Richmond, Calif., shipyards, Thomas went to live with her husband's family in Indiana while he was still in the South Pacific. Thomas’ younger brother came home on furlough before the war's end, she recalls. Although the brother wasn’t hurt physically, he suffered emotionally from his war experiences.

James died April 13, 1998, of heart trouble and complications from diabetes.

In retrospect, Thomas says she enjoyed helping the soldiers and the war effort, but notes the war did change her.

"It made me see [life] different," Thomas said. "It made me more mature. I realized that I was not a little girl anymore ... but most of all, it taught me to love people more."

Thomas says she gravitated toward industrial work during the war as an opportunity to learn new skills, earn money for her family and aid the young men serving the United States.

"We were very proud that we were doing something good, something to help, to help the boys, really," Thomas said.

Mrs. Thomas was interviewed in Brownsville, Texas, on October 13, 2003, by Anna Zukowski.