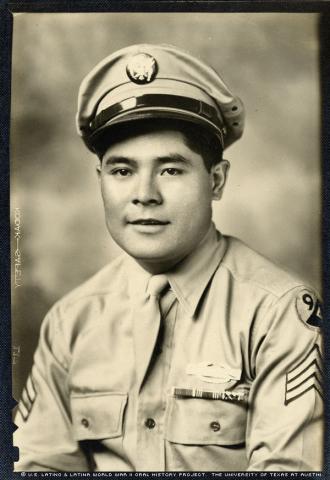 On Jan. 27, 1945, in freezing, blizzard-like conditions,, Sgt. Manuel Vera was wounded in action in Nennig, Germany, when an explosion sent shell fragments into his right leg.

Having grown up in Nebraska during the Great Depression, Vera understood how to survive. As a child, he said, his parents instilled in him the values of perseverence, discipline and a respect for others. These traits served him well during his time in Company K of the 302nd Infantry Regiment, 94th Infantry Division.

Vera recalled that, before he was wounded, the company was expecting to be relieved from the frontline, as replacements from the 301st Regiment were only a mile away. Vera and his comrades attempted to sleep, but the freezing temperature and lack of proper clothing made it impossible. Ice covered the ground, preventing Vera’s platoon from digging or using explosives tocreate cover in the open field where they rested.

They awoke early the next morning and, as they began heading toward Nennig and safety, German troops opened fire on the exposed group from only a couple hundred yards away. Vera’s platoon held off the attack and was beginning to retreat, when an explosion suddenly went off slightly to Vera’s right.

“I’ve been hit!” he recalled having yelled.

As soon as he collapsed, his commander, who was a first lieutenant, and another soldier rushed to his aid. As the two men carried Vera to safety, another explosion sent all three to the ground. The soldiers gathered their bearings, however, picked up Vera and carried him to safety. The first lieutenant wouldn’t be so lucky later; he was killed during another battle.

Vera’s injuries kept him in and out of hospitals for the next three years, from 1945 to 1948. He needed numerous surgeries to save his leg and allow him to walk. He also had several skin grafts for the burns he received.

Despite his condition, Vera says he persevered largely thanks to his faith and positive outlook during and after his time at war.

“We are nothing in the world, nothing, if He doesn’t help us,” Vera said. “I thank our Lord, taking me from here, overseas, where I had to go, [for] when I was in the hospital [in England … and bringing] me back … others that I knew as friends, they never got to come back.”

Vera was born July 27, 1922, in Nebraska to Manuel Emmanuel Vera and Margarita Reyes Vera. His father grew up in Mexico. But after his grandmother died, the elder Vera moved to Nebraska, where one of his uncles resided. He later went back to Mexico, met Margarita and then moved back to Nebraska with her.

Vera’s father worked as a farmhand and Margarita was a stay-at-home mother, tending to her children. Vera was one of eight boys and two girls. His parents learned some English, but spoke Spanish at home. The children went to school and had to learn English, because it was the only language taught or spoken there.

Vera was around seven years old when the Great Depression gripped the United States. But he says his family managed through the difficult times. Then five of the boys went to serve in World War II, and another one went to Korea a few years later. All returned fromthe conflicts and settled down in different parts of the country.

Vera was drafted at the age of 20 in December 1942. He went to Wyoming for basic training and also spent time in Denver, , California, Kansas, Tennessee, Georgia and, finally, New York before being deployed to Europe.

“[I] wanted to go to war,” Vera said. “A lot of times you want to see something different, [but] once you get there, it’s nothing beautiful.”

In 1945, Vera returned home, and in 1948 he was honorably discharged. For his service, he earned the Purple Heart. His family said Vera never bragged about his service or his medal.

Vera was in the hospital when he heard the war had ended.

“It’s something that makes you happy,” he said. “War is not nice.”

Vera met his wife, Natalia Flores Vera, while back home in the States. He was able to use the GI Bill to pay for his trade school coursework in Milford, Neb., and Bethany, Mo., to become a watch repairman. Vera and his wife went on to have two children: Nicolas and Nadine. After his eyesight began deteriorating, he took a civil service job at the Sioux Ordnance plant in Sydney, Neb. That plant eventually closed and Vera was transferred to White Sands, N.M. He pursued a civil service career of more than 30 years before retiring.

At the time of his interview, he and his wife lived in El Paso, Texas. Every day he would go to the local senior citizens center—Wellington Chew Senior Center.

Vera said he believed it was the duty of all young people to serve their country, just as he had. He also said that he believed that soldiers in more recent wars have had better equipment and clothing-, than he and his soldiers had during the harsh European winter.