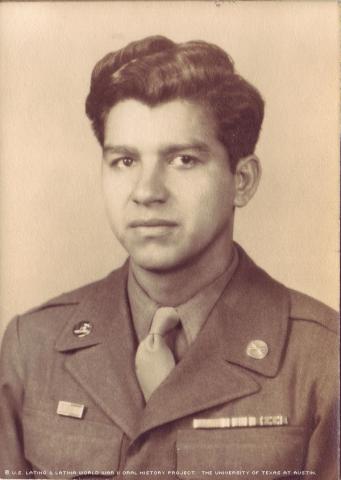 Manuel Sierra Pérez sits on a chair at a desk cluttered with photographs of his children at a young age and a University of Texas coffee mug, among other items.

“I have everything on the desk. I don’t even have to move,” Pérez said.

From his desk, he still writes to his friends from the war, who he met more than 50 years ago. Joining the Army was an eye opener for him in many ways: other cultures, ideas, education and opportunity.

Pérez attempted to join the armed forces before he turned 18, but his father wouldn’t sign the papers to allow it. His father, Ignacio Yañez Perez, was himself a war veteran who’d fought and been shot in the Mexican Revolution. Ignacio didn’t want his son to be placed in the face of great danger because of his signature, so he refused to sign. It wasn’t long, however, before Pérez received a draft letter and joined the Army in July of 1943.

He went through Basic Training at Fort Sill in Oklahoma, where he was assigned to the 755th Field Artillery Battalion of the Army’s artillery corps. Approximately 15 other Mexican Americans were in his unit, he says, along with about 10 to12 Italians and lots of Polish.

A lot of joking around about race went on. It’s within this context he recalls hearing the word Spic as a racial slur for the first time. He says he was used to the word “Greaser,” but in the north, “Spic” was a common slur, just as was “Spaghetti Bender” for Italians. None of the soldiers took the joking seriously, he says.

“It was a give and take thing. It wasn’t bad and it was better overseas. Overseas, we help[ed] each other, especially at the front,” Pérez said. “It’s a whole different story.”

On one occasion, an Italian soldier even took Pérez and others GIs home to Chicago with him in 1943. Pérez remembers the house being enormous and the food endless.

Pérez recalls with a laugh being cautioned by his GI host before dinner that they would be at the table for one to three hours, and to only eat a little bit of everything, since there would be lots of courses. It was the first time Pérez ever tasted pizza, and it was homemade. They ended up sitting at the table for three hours, says Pérez, smiling in memory of the meal.

After training at Fort Leonard Wood in Missouri, Pérez was deployed to Glasgow, Scotland, where he received more artillery training. Each soldier in his unit was schooled in the use of several guns and carried them at all times. They were also issued shovels, to dig foxholes for protection from gun fire.

“When you’re here, you’re worried about protecting yourself and your [buddies],” Pérez said. “You’re thinking about survival.”

When passing through Bastogne, Belgium, those survival instincts kicked into high gear when Pérez was shot. During the Battle of the Bulge, Army units became separated, so GIs found themselves fighting with men from various units. Pérez fought with a mixed group that got surrounded by Germans and, as a result, was cut off from other U.S. units for three weeks or longer, and ran low on ammunition and food. Pérez says his group got lucky, however, because enemies assumed many more soldiers were in their group; otherwise, they probably would have been taken prisoner.

Shots were fired from both sides during that battle. As they got closer, Pérez recalls running into his fox hole. Once the fire stopped, he attempted to get up, but his body wouldn’t cooperate. He recalls reaching down to his leg and feeling a warmness, at which point he knew he’d been hit.

Two fellow soldiers pulled him out and risked their own lives to take Pérez to a first aid station. He was sent to a hospital in France for three months, then returned to his unit afterward.

While in England, he remembers being out in the field, and very confused the first time they had to stop training for two hours

“The English were going to have tea,” he explained with a laugh.

This was one of the many cultural experiences Pérez remembers having during his time in the military. He recalls everyone being mixed together, except for the black soldiers, who were in units of their own, but with Anglo officers.

“[President Franklin D.] Roosevelt messed up on this. He should have had everyone mixed together at the beginning of WWII,” Pérez said. (President Harry S. Truman later brought the troops together.)

Pérez says his personality enabled him to forge great relationships with soldiers of all cultures. He recalls one time in particular, when he and other Polish soldiers met with some black GIs. They began talking and the black soldiers took out two bottles of some kind of French beverage. Having no cups, they shared the bottles, passing them to one another. Pérez begins laughing when he recalls one of the other men saying, “Thought you didn’t like to socialize with blacks.

“Everybody got along out there,” Pérez said.

About 30 miles from Berlin, Pérez learned the war was over, so he traveled around Europe for a couple of weeks before returning home to Texas. He was discharged from the Army at Camp Fannin, near Tyler, Texas, on Jan. 1, 1946, at the rank of Private. For his service, he earned the Purple Heart, an American Theater Campaign medal, an EAME campaign medal with three bronze stars and a Good Conduct medal, among other honors.

Back home in Fort Worth, Texas, Pérez began working at a print shop and attending a junior college east of Fort Worth in Arlington. He says he learned of the GI Bill through neighborhood friends, who’d also been in the Army. The thought of going to college hadn’t crossed his mind before joining the military, Pérez says.

He recalls his buddies encouraging him to use that opportunity, so he decided to attend the University of Texas, where he studied business management and was urged to join Latino organizations by some of the other Hispanic veterans. In fact, Pérez met his future wife, Mary Louise Teniente, at a dance hosted by one of these groups, called the Alba Club.

WWII helped the Latino community in many ways, he says.

“If it wouldn’t have been for the GI Bill, I would have never gone to school,” said Pérez, who recalls being raised in a modest home.

“Growing up, I know we did not have all the comforts of home, but I don’t remember growing up and not being able to eat. If nothing else, we always had tortillas and frijoles.”

He doesn’t recall using eating utensils until he was in the Army, because he says his family would use tortillas as scoops.

Pérez says the Army made him a better person and opened up a world of possibilities. Over the years, he has been actively involved in several organizations like the Disabled American Veterans and the Military Order of the Purple Heart, where he was instrumental in opening a chapter in Laredo. He now lives in San Antonio, Texas, and says he has instilled the value of education in his children, who’ve all been graduates of the University of Texas at Austin.

“I had never been out of Fort Worth until I got out of the service. It made me a better person,” Pérez said. … “I have always felt the service is good for anyone.”

Mr. Pérez was interviewed in San Antonio, Texas, on July 28, 2007, by Marcel Rodriguez.