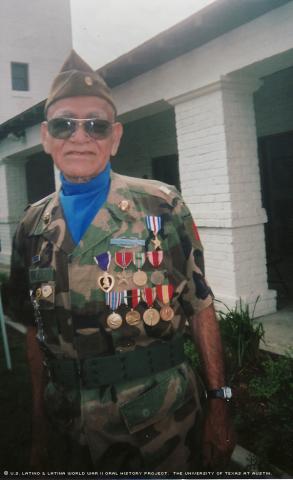 Manuel Robles, an 85-year-old World War II veteran, grasps a gold- and black-edged frame with steady fingers. In the center is a faded black and white photograph with a beaming young soldier frozen in time.

Robles says the man is Quentin Hasse, “a very good friend” who was in the 88th Infantry Division and assigned to the 349th Infantry Regiment with him during the war. Hasse is also the man Robles turned around to find screaming, his right calf sheared open from shrapnel, during the middle of a surprise attack by Germans, later to be called “Bloody Ridge.”

Robles, a scout from the Los Angeles area who had sniper training, recalls throwing down his M1 rifle, combat pack and grenades, and hoisting Hasse onto his back. Robles says he lurched forward 50 yards amid machine gun and mortar fire to reach a shelter and first aid.

One of 10 siblings, he couldn’t have dreamed he’d be thrown into that situation as he grew up in Cudahy, Calif., where he attended Bell Elementary School for eight years and dropped out of Whittier High School after his first year.

Before the war erupted, Robles worked as a firefighter for the Civilian Conservation Corps in Cucamonga Camp in San Bernardino, Calif. This was a program enacted during the Great Depression to put unemployed men in jobs and conserve natural resources at the same time.

Robles enlisted in the Army at age 18 on Nov. 30, 1942, and was immediately trained at Camp Gruber near Muskogee, Okla.

“I was not drafted, I joined,” he said. “I wanted to be with my brother, who was here in California. Ended up there in Oklahoma”

Robles recalls being greeted upon arrival at the “Bloody Ridge” battlefield shelter by a captain, who jumped up and

“I saved [Hasse] and I would do it again if I had to do it. For him or anybody,” Robles said.

July 13, 1944, had started out as a trek up a steep hill at sunrise that was “too clean, too nice.” Robles thought he heard German voices and spotted a few suspicious caterpillar-tank tracks.

Before anyone could react, however, Germans opened fire. Robles’ division was trapped, unable to move forward or back down the steep hill they’d climbed.

In the initial torrent of gunfire and shrapnel, Robles recalls instantly losing one friend, but being able to move Hasse to safety. He says he then, with the aid of another sergeant, went back for his wounded sergeant. The two were too late, however, as the medic declared Robles’ sergeant dead.

Even though he was exhausted, as he hadn’t slept or eaten the night before, Robles says he tried to run back into battle to help the men who were still fighting on the hill.

“They scolded me, ‘Stay here, you had enough!’” Robles recalled.

He remembers being ordered to leave with a jeep carrying wounded and dead soldiers to the hospital, where he slept for two days.

“Bloody Ridge” was such a powerful experience for him that, years later, he would retell it in the publication devoted to his unit, “Blue Devil” magazine. When Hasse received a copy, he got in touch with Robles.

“All we did was laugh and remember. It was beautiful,” Robles said.

Even though Robles wasn’t immediately decorated for his bravery, when the two were reunited more than 60 years later, Hasse was among those who helped Robles finally get a Silver Star, which is awarded for a distinguished display of courage during combat. In a letter to Robles’ representative, Grace Napolitano, Hasse wrote, “I am alive and have lived that life because another soldier saw my plight right after the shells landed and came to my assistance.”

On March 21, 2007, Robles finally added the Silver Star to his decorations, which include the Purple Heart and a Bronze Star.

His early military experience was both eye-opening and sobering. While his unit was being transported in primitive boxcars padded with straw through Oran, Algeria, in Northern Africa, Robles saw in the distance the storm-like flashes of a battle being waged. Once his infantry arrived at their destination, he says they provided relief for British troops.

Early in the morning, after Robles had finished a box meal of crackers, chocolate and coffee, the opposition opened fire on them.

“All of a sudden, they opened up the artillery. We had experienced seeing it and all that before, but hitting us, no, and guys screaming, getting hit, no. I would say, and I ain’t gonna lie, [that] everyone was frightened, including me. I might have acted like I wasn’t,” Robles said.

He recalls seeing his friend, Ignacio Cordova, getting hit square in the nose by shrapnel, as well as never seeing him again.

“Shrapnel will hit anything or anybody, it doesn’t have a direction. Just like a shower of red hot lead,” Robles said.

After getting discharged from the Army in December of 1945 at the rank of Private First Class, Robles served again – this time in the Korean War. He re-enlisted in 1949, said his wife, Margaret Vasquez Robles, in a telephone interview. She says he had a hard time finding steady work after his service because his eyes and ears weren’t what they used to be, which she attributes to him having been too close during the wars to multiple explosions when they went off. Robles finally landed a full-time job working on helicopters with Advanced Structures, which he kept for 27 years, Margaret says.

Robles said during his interview that the friends he made in combat had all died, with the final one passing away in 2006.

Robles married Margaret in September of 1962 on Placita-Olvera Street in downtown Los Angeles. The couple has two children: Anthony, or “Antonio,” born in 1964, and Cindy Elizabeth, born in 1971.

Mr. Robles was interviewed in Pomona, California, on June 8, 2007, by Jose Figueroa.