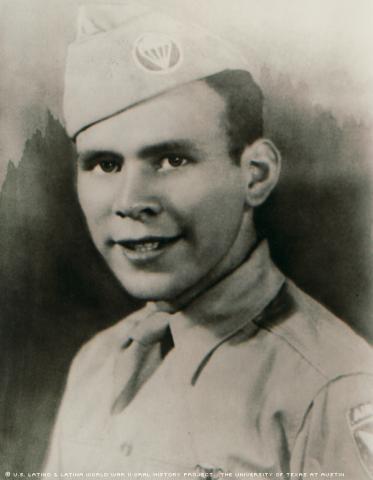 Twenty-two-year-old Manuel Pérez, Jr. was killed in action on March 14, 1945, on the road to Santo Tomas in Southern Luzon in the Philippine Islands.

Private First Class Pérez served as a paratrooper in the 11th Air Borne Infantry Division and was the lead scout for Company A of the 511th Parachute Infantry. A month before he was killed by a sniper bullet, he’d qualified for the Medal of Honor, the United States’ highest military honor. On Feb. 28, 1945, he wrote the following to his uncle, Private Jesse Pérez, who was also in the South Pacific:

“Dear Uncle … they are putting me in for a medal and it’s not the purple heart, you will be surprised how big it’s going to be … Your Nephew, Manuel Pérez, Jr.”

Pérez, or “Toots,” as he was known to family and friends, was born March 3, 1923, in Oklahoma City, Okla. When he was a young boy, his family moved to Chicago, where he was raised by his father, Manuel Pérez, Sr., and his paternal grandmother, Tiburcia Moncada Pérez. Jesse and Pérez’s aunt, Emily Pérez, also served as surrogate parents.

Pérez attended Goodrich and Jackson Elementary Schools and Crane Technical High School on the West Side. The family lived on the Near West Side at Racine and Taylor Streets and their Parish was St. Francis of Assisi. Before getting drafted in January of 1943, Pérez was employed by Best Foods, Inc., where Jesse also worked. Pérez volunteered for parachute duty and was sent to the Pacific Theater.

As a young man, Pérez was charismatic and determined. That drive was evident in the courage and valor he displayed during WWII. In his book “Among The Valiant,” Raul Morin described Pérez as “a whirlwind paratrooper who never let up regardless of how tough the enemy or how large the odds.”

According to Pérez’s Medal of Honor citation:

“He was lead scout for Company A, which had destroyed 11 of 12 pillboxes in a strongly fortified sector defending the approach to enemy-held Fort William McKinley on Luzon, Philippine Islands. … Single-handedly, he killed 18 of the enemy in neutralizing the position that had held up the advance of his entire company. Through his courageous determination and heroic disregard of grave danger, Pfc. Perez made possible the successful advance of his unit toward a valuable objective and provided a lasting inspiration for his comrades.”

In 1946, on Washington’s birthday, the Medal of Honor was presented to Pérez’s father on the International Bridge between Laredo, Texas, and Nuevo Laredo, Tamaulipas, Mexico. And that same year, shortly after the war ended, returning Mexican American veterans formed Chicago’s American Legion Manual Pérez, Jr. Post 1017 in honor of Pérez’s memory. Three years

Later, Pérez’s body was returned to Chicago for formal memorial services, which were conducted by the post. From Chicago, the body was escorted to Oklahoma City for final burial.

Tribute written by Angela Pérez Miller, a cousin of Mr. Pérez, in March of 2004.