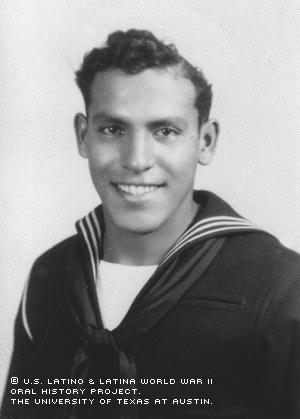 Manuel Espinoza's father, Concepción, was struck by lightning in 1930 while working on railroad tracks in Colorado.

The older Espinoza's death had great repercussions: His young widow, Ventura Mendoza Espinoza, and their three sons moved to San Antonio, Texas, to stay with her parents. Ventura began working and her boys helped her out. In time, though, Espinoza would join the Navy and survive battles in the Philippines before returning to start a life of his own.

In their small house, the Espinozas owned a kerosene stove; when they ran out of kerosene, they cooked outside. If anybody wanted to go to the bathroom, he or she had to walk half a block down the street.

"It was really bad during the Depression," Espinoza said.

Before his father died, Espinoza’s mother didn’t have to work outside the home; however, she had to find a job after the tragedy occurred, so she soon became a cook in a renowned restaurant named Casablanca. Young Manuel didn’t want Ventura to have a job; she’d leave for work at 4 p.m. and return at 4 a.m. Her other sons, Ismael and Emeterio, didn't want their mother working, either, so they took whatever jobs they could -- plucking turkeys for a nickel a turkey, delivering milk at dawn and afternoon newspapers later in the day, and unloading bananas from boxcars, in exchange for bananas.

Because of her sons' jobs, Ventura was able to stay home and tend to the household. Now and then, however, she’d still "sneak out" and provide catered cooking for special events, such as weddings.

When Espinoza was in the seventh grade, he dropped out of school upon recognizing his brothers were doing well in their classes while he wasn't. Although he grew up without a father, he did have a strong male influence in the form of his grandfather, Isidro Mendoza, a candle-maker and carpenter who came to the U.S. during the Mexican Revolution.

"He never touched us," said Espinoza about his grandfather's way of disciplining. "He just looked at us and that was enough."

One thing Espinoza remembers his grandfather telling him was to stay out of the Anglos' way. He received a scolding for being at the Municipal Auditorium riot on August 25, 1939, when labor leader Emma Tenayuca was scheduled to speak at a Communist Party meeting, which ended up getting overrun by protesters, including the KKK.

Then, on Dec. 7, 1941, 16-year-old Espinoza and his friends went to church early. When they reached San Fernando Cathedral, the priest informed them the Japanese had just bombed Pearl Harbor. Shortly afterward, most of Espinoza’s friends joined the service. He wanted to follow their lead, but had to wait a year until he was 17, when, through his mother's signature, he could join the Navy. On Nov. 5, 1943, Espinoza boarded a train destined for San Diego, Calif. He and two other Mexican Americans were assigned a car with enough beds for each. Then, Espinoza says a group of Anglos headed for the same boot camp entered the car, and ordered him and the two other Mexican Americans to another car with only two beds.

He says when he reached San Diego, California Anglos treated him and the other Mexican Americans with dignity, and adds that they made sure to stay away from the Texas Anglos.

After Espinoza’s basic training, he received landing training with the Navy at the Treasure Island base in San Francisco and then Marine Training at Camp Pendleton.

In 1943, when Espinoza's grandfather died, the young soldier received a loan from the Red Cross and the Navy let him go home. He decided to go by train, but before boarding, his friends told him to sit by a woman with a baby and pretend they were his family. Like this, he’d be able to ride in the "good car" instead of riding a car where fumes would come in through the open windows throughout the 1,273-mile ride.

In August of 1944, the 3rd Division sailed on the U.S.S. Sarasota, a troop ship, from San Francisco to the Pacific. On the way, the seamen listened to WOAI radio station from San Antonio, as well as to the news from Japan.

"According to Tokyo Rose, our ship sank twice!" said Espinoza with a laugh.

According to the Web site for the Federal Bureau of Investigation, "Tokyo Rose" was the fabricated name given to a series of American-speaking women who made propaganda broadcasts. In these radio shows, "Tokyo Rose" tried to demoralize American soldiers and sailors during the war by highlighting their hardships and sacrifices.

When Gen. Douglas MacArthur began the invasion of Leyte Island on Oct. 17, 1944, the 3rd Division followed right behind the troops, but when they arrived, the Army had already taken the island.

The sailors found that same situation in San Antonio, Philippines, in December of 1944, but here they were greeted by hundreds of Filipinos, who came down as soon as the American soldiers raised the American flag.

"Thousands and thousands of people came out of the mountains to greet us," Espinoza said. "They would make an assembly line to get things that were coming from ships."

On Jan. 9, 1945, the troop ship arrived at Luzon Island in the Lingayen Gulf.

In battle at the invasion of Ie Shima on April 18, 1945, Espinoza was wounded by shrapnel. Shards cut the center of his forehead and under his right eye. He was shipped to the USS Hope Hospital, and then taken to the San Diego Neighbor Hospital, where he stayed for six months. Three fingers of brandy were given to each patient every morning to relax their nerves.

After this, Espinoza was sent to Camp Wallace in Galveston County, Texas, to supervise German POWs. Later, he went to Nashville, Tenn., to help civilians in flooding along the Mississippi River. He was finally discharged in 1946 at the rank of Seaman First Class, earning the Purple Heart, an American Theatre Campaign Medal, Asiatic Pacific Medal with one star, Philippine Liberation Medal with one star and WWII Victory Medal.

When he came home to San Antonio, Texas, he began working as a radar repairman at Kelly Air Force Base, as well as moonlighting at a local brewery. Espinoza finally retired in 1987.

In 1950, he married Theresa Prado Espinoza and they had five boys and one girl. Although he was unable to get an education, he and Theresa saw to it that their own children received the best education possible, which included private Catholic schools. Three of his children earned their master's degree.

Espinoza encourages anybody to go into the Armed Forces, "but make sure to get your education first, because that's what's important," he said.

Mr. Espinoza was interviewed in San Antonio, Texas, on October 28, 2003, by Xochitl Salazar.