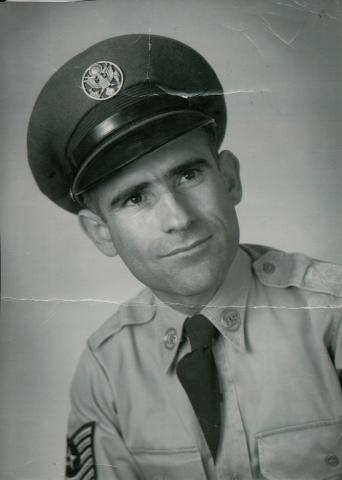 From a very young age, World War II veteran Manuel De Jesus Lozano was on the move. After a childhood marked by struggle, his work ethic propelled him to a long and successful career in the Air Force.

He finally settled in Little Rock, Arkansas, where he worked in state government and later for a neighbor -- Bill Clinton. Lozano worked on Clinton's campaigns for governor and for president of the United States.

Lozano was born Feb. 15, 1920, in San Antonio, Texas, to Eucario Lozano and Josefa Perez Lozano. He was the fifth of nine children -- seven boys and two girls.

Lozano was just 7 when his father died.

His mother had to put six of her children into St. Peter-St. Joseph Orphanage, although she was able to visit them. Lozano received his elementary education from the Sisters of Charity of the Incarnate Word who ran the home.

He went to school up to the seventh grade, and at age 12, he moved out of the orphanage. The nuns sent him to San Angelo, Texas, where he worked as an elevator engineer at St. John’s Hospital. He returned to San Antonio the following year.

Back in his hometown, Lozano resumed his education at Central Catholic High School, from which he graduated in 1940.

“In order to pay for the tuition, I worked after school,” including cleaning the classrooms.

During his junior year in high school, Lozano and some friends decided to join the National Guard, 36th Division, so they would not get drafted. They were called to active duty the following year.

In Lubbock, Lozano met Louise Vestle, who would be his wife for 60 years. After dating for a few months, the couple married on June 15, 1942. Their first daughter, Mary Jo, was born the following year. Their younger daughter, Lou Ann, was born in 1954.

As World War II raged on, Lozano was sent to North Africa in 1944. His unit eventually was stationed at John H. Payne Air Base, in Cairo, Egypt.

One day, he read in the Army Times that three of the friends who had enlisted with him had been killed in action.

“They went on a little boat to Italy and got slaughtered,” Lozano said.

Lozano remained on active duty until November 1945, when he was released at Fort Sam Houston, Texas.

After the war ended, Lozano had trouble finding a job. He decided to move his family to Arkansas; he also applied and was accepted to Yale University. But after realizing that the cost and time requirements of attending college would not work for his family, he re-enlisted in the Air Force in 1948.

His second stint in the armed forces, which lasted until 1963, took Lozano to far-flung places. At various times, he was deployed to Greenland, Spain, Morocco and Peru, where he and the U.S. Embassy Air Attaché assisted the Peruvian Air Force with computerizing its inventory supply system.

He returned from Peru to the United States in April 1963 and applied for retirement. He was discharged at Little Rock Air Force Base in Arkansas, with the rank of senior master sergeant; he still goes by the nickname "Sarge."

“I entered the Air Force and, after 22 1/2 years, I retired from active duty in 1963,” Lozano said. He was weary of traveling without his family.

Settling in Little Rock for good, Lozano, then 43, started a new career in state government. For more than 20 years, he applied the skills he had developed in his military career to his job for the Arkansas Department of Revenue as a computer systems analyst and director of planning and data processing. He retired from state government in 1986.

Bill Clinton, at the time an emerging figure in the Democratic Party, lived across the street from the Lozano family home in Little Rock.

“I told him that I didn’t have a job, and he told me to go work for him down at the office, and I went the next day,” recalled Lozano.

Lozano participated in Clinton’s campaign for governor of Arkansas and was a campaign committee member for his two successful White House bids.

“I remained with the committee until his second election (and) until I retired in mid-1998," he recalled.

He considers Clinton a great friend. During Clinton’s presidency, the Lozanos were flown to Washington, D.C., to spend Christmas at the White House. The family went every year except in 1996, when there was an illness in the family.

“I got to know Bill pretty well, and I love Hillary,” Lozano said.

The Clintons sent condolences when Lozano’s wife passed away in 2003 and when his daughter Mary Jo died in 2010.

Lozano added a postscript to a timeline of his life he sent to Voces: “My dear wife, best friend … passed away Feb. 26, 2003," he wrote. "We had been married 60 years, 8 months and 11 days. Rest in peace, Agatha Louise Vestle Lozano. I will love you forever ... God willing, I will join you again."

Mr. Lozano was interviewed by Nikki Cruz in Little Rock, Arkansas, on March 23, 2013.