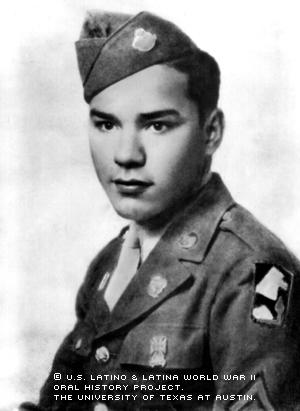 Born Feb. 28, 1925, World War II veteran Mac Salazar grew up the youngest of 13 children in Kansas City, Kan.. He calls himself and his siblings "Depression babies," but says they lived well, always having enough tortillas, frijoles and soup to get by.

It wasn't long before Salazar was heading to the classroom.

"I remember the first day of school. They took me and they left me in the kindergarten there," Salazar said. "I can remember who took me, who I saw and I can remember a girl there."

Salazar attended his first seven years of school at Clara Barton Elementary. At the time, the school was all Mexican; there were also schools only for blacks and only for whites.

By eighth grade, Salazar had graduated from Clara Barton and moved on to high school. He attended Argentine High School in Kansas City, which was integrated at the time. He describes the atmosphere as a place where fighting was prevalent because of the diversity of races, but where students could obtain a great education.

"Excellent -- not like now, and I tell you why: These ladies couldn't get married ... because they weren't permitted, so they just dedicated themselves to being good teachers," said Salazar of the quality of the education he received.

Salazar stayed in high school until the age of 16, when he left for a job with Santa Fe Railroad in Kansas City. He cleaned boiler flues in the railroad roundhouse and cleaned out coaches until he was drafted into the Army when he was 18, two years after the start of the war.

"They made me grow up too fast," Salazar said. "I still had two or three years of chasing girls if I'd stayed, but I didn't. I went."

Salazar was drafted into the Army on August 9, 1943, leaving behind his Kansas City youth and his job at the Santa Fe Railroad.

After a year filled with basic training in Oregon and preparation in Missouri, Salazar was off to war with the 882d Field Artillery Battalion, a 105-mm Howitzer Unit supporting the 70th Infantry Division. He recalls his first destination as being France, landing there in mid January of 1945. In France, American soldiers slept on the ground. They used branches to place their equipment on when it rained.

Then Salazar’s group was sent to Germany, where he remembers the opposite scenario.

"Anytime we want to set up, we had a house," he said. "They had to come in there and tell them, 'you got two minutes to get out; they're coming in.'"

Once inside, the soldiers looked for hidden items and confiscated anything, from wristwatches to brand-new motorcycles.

During the war, Salazar learned many new things, met new people and experienced some of the most memorable and frightening moments of his life. One unnamed "buddy" of Salazar caused him to fear for his life on not just one occasion, but two. He remembers getting ready to visit with the sergeant one day, when his buddy asked him if he could take a look at Salazar’s gun. While his friend held and admired it, Salazar says he accidentally shot it right toward him. Salazar looked down at his left side near his hip and noticed a hole going from the front side of his shirt to the backside: His pal had missed his skin by less than an inch. Salazar spent the day getting over the incident, and says he eventually forgave his friend for the accident.

The second scary incident he recalls is a time they were getting shelled. They ordered everyone into their holes, so Salazar complied. He described hearing "psssssss" sounds as the shells fell to the ground near him, when all of a sudden, something large fell onto him inside his hole. He felt a stabbing pain in the lower left side of his back, looked behind him and saw his friend. He’d jumped into Salazar’s hole because he wasn't able to make it to his own hole. Salazar understood his fellow soldiers' need to find safety, but wished it didn’t have to come at his lower back's expense.

Salazar describes his fellow Army soldiers as "brothers." He says everyone depended on everybody and banded together to make it through the war.

"When this war started, the people became one," he said. "Wasn't no whites, blacks, Mexicans. Everybody was one."

Salazar was in Germany when the war ended and he was sent back to the United States, to Brownwood, Texas. He got four weeks off, served another five months in Texas, and then was honorably discharged Feb. 3, 1946, at the rank of Corporal.

He went back home to Kansas City and picked up where he left off with the railroad, where he continued to work until 1985. He married Belia Madrigal shortly after returning from the war. They eventually raised nine children: five boys and four girls.

At 78 years of age, Salazar looks back on his life with few regrets. He enjoyed his childhood, served his country, worked in a steady job and raised successful children. Financial director, fire captain and construction-company owner are the jobs of three of his children, for example.

"I'm living the American dream," Salazar said. "All I ever wanted was a house and children. I'm happy."

"Seven of my kids have bachelor's degrees and five have master's, and all I did was go to school for nine years and started the 10th," he said with a laugh. "But that's our job."

Salazar encourages today’s youth to go to school and get an education, and to the parents he says:

"Above all, take care your kids."

Mr. Salazar was interviewed in Kansas City, Missouri, on August 2, 2003, by Ascensión Hernandez.