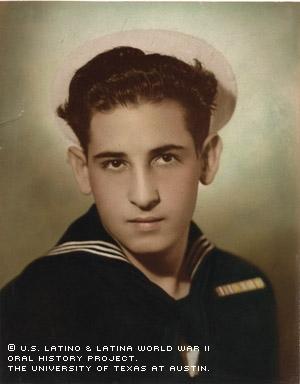 Lying on the deck of the USS Tripoli on a quiet night on the Pacific Ocean, Luis Reyes Davila felt at peace in a time of war. During this brief respite from battle, with the soothing waves splashing against the aircraft carrier and the twinkling stars above, he thought of the peaceful life back in El Paso, Texas, that he left behind to serve his country.

"I used to think about home, how things would be back home," Davila said.

Thoughts of going to war began early for him. He tried to enlist in the military when he was 16 before being rejected because of his young age. When he was 17, he enlisted in the U.S. Navy in 1943, serving three years in the Naval Air Force. Although still underage, he secured permission from his guardian, his uncle Jose L. Davila.

Davila was born Dec. 15, 1924, to Gonzalo Reyes and Concepcion Davila Reyes. His parents would divorce a year after he was born; he lived with his mother until he was 4, when she died of pneumonia. He never heard of his father again until he was 8, when he received news of the man's death of unknown cause. Davila was raised by his uncle, Jose L. Davila, and his aunt, Remedios Davila. Although his cousins, José and Genoveva Davila, accepted him as their little brother, Davila said he always felt like the third wheel in his adoptive family.

"They treated me different than my cousins," Davila said. "[On] Christmas, he [José] got a lot of good toys and on my birthday and Christmas, I didn't get anything."

Economic conditions were harsh in the Davila household. His uncle worked with Southern Pacific railroad, but during the Great Depression, he labored only one or two days out of the week. Young Luis tried to help as much as he could.

"I used to get a little red wagon and fill it up with wood, sell it and go work in the yards to get me a nickel or penny," Davila said.

His education was predominantly in Mexican American schools, and he was well aware of the segregation taking place.

"I wanted to know what was the difference," he said. "How come we couldn't be together?"

Davila finished a year in high school before taking off for training in San Diego. He remained in the California city for two months and was then assigned to a squadron at the Naval Air Station in Seattle, Wash. He attended air crewman school, but didn’t qualify for crewman because of poor grades. He was then transferred to the air division squadron attached to the USS Tripoli (CVE-64).

"We did night flying and landing and trying to bomb, drop bombs, and target tractors until the squadron was qualified," he said.

Once the squadron was ready, the men were transferred to the USS Tripoli.

Davila, a member of the air division, was responsible for making sure the planes were in good condition and ready for use.

"But one day I was loaned to another squadron and got off the ship for a week, and when I came back from the other squadron, looking for my ship, the [USS Tripoli] was there but my squadron had been transferred to another ship," he said. "They left me."

The Tripoli had a serious fire on Jan. 4, 1944, while fitting out in San Diego. Davila's squadron was apparently transferred to another escort carrier, which then departed San Diego for the Pacific. Once repaired, the Tripoli left San Diego, with Davila, on January 31, arriving in Norfolk, Va., on Feb. 15, 1944. He would stay with his ship throughout the war. He later heard that some of his former seamen, including his replacement, had died in the Pacific battles; his replacement, another turret gunner, was killed in action.

Davila loaded Composite Squadron 13, equipped with Avenger bombers and Wildcat fighters, and departed for nine months of South Atlantic anti-submarine and convoy protection on March 15. They used to go for 30 days at a time chasing "mother submarines," those providing fuel and provisions for smaller German U-boats.

"We were relieved by two other aircraft carriers and more ships," he said. "They were the ones that captured that submarine."

It wasn’t long before Davila adjusted to the hardships of the war. He still recalls a friend's horrible death. They were in the South Atlantic when a plane landed on the ship and the crew parked it on the side. They were unable to hook the tail of the plane to the deck and the aircraft somehow caught on fire. The propeller never stopped running.

"I was given an order to get the fire hose ... but in front of me was another friend ... he got in front of me and he put his head in the propeller," Davila recalled. "It was just like when you shuffle a deck of cards. I looked up and passed out."

Incidents such as this one instilled a death-defying mentality in the young sailor: He was more willing to take chances, to risk his life.

"I figured I was going to get killed during the war," he said, "so I figured my time is coming up."

When the war was over, his squadron was sent to Hawaii to assist injured soldiers.

Davila, who earned the rank of Seaman, was discharged in 1946, returning home to enjoy civilian life. He often headed to dance clubs in Ciudad Juarez, Mexico, across the border from El Paso, where he met Flora Ortega. They married in 1947 and had two sons, José Luis and Miguel. Davila worked several supervisory jobs with propane companies until his retirement in 1997.

Sitting in a room at the El Paso Vet Center, Davila can't help but think of how lucky he has been.

Mr. Davila was interviewed in El Paso, Texas, on February 2, 2002, by Liliana Velázquez.