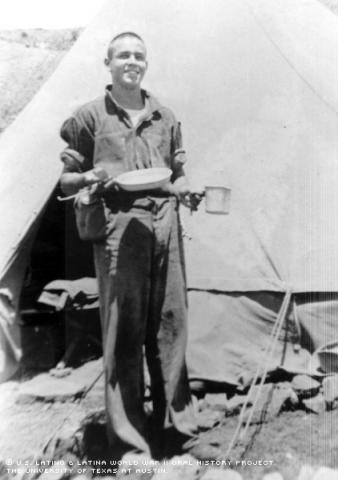 Luis Martinez has had a hand in history.

He participated in one of the more famous New Deal projects, witnessed D-Day from the English shores and attended Gen. George S. Patton's funeral. But what he remembers most as a World War II veteran is meeting a young woman in the British Women's Auxiliary Territorial Service and falling in love.

Martinez's story begins in 1915 in the Texas border town of Laredo. Raised on his father's ranch in Zapata County, Martinez says he doesn’t remember much from his childhood other than occasionally playing football with friends and going to school. He also worked shining shoes and selling newspapers.

His mother, Maria Medina Martinez, who was a teacher, died when he was 19. His parents both spoke only Spanish in the home, so he and his sister learned English in the classroom.

Although he didn't finish high school, at age 18 Martinez joined the newly formed Civilian Conservation Corps. Participants of the CCC, one of President Franklin D. Roosevelt's many projects designed to give people work and structure during the Depression, paved roads, planted trees and did other major construction projects.

Martinez got a job working in Fort Davis, Texas, that paid him $30 a month; he kept $5 and sent the rest back to his family. The project was about 200 miles southeast of El Paso, the future site of the McDonald Observatory. Martinez remembers building one of the first telescopes there as well as paving roads and doing other park services.

Although he says he never saw discrimination against Mexican Americans while growing up in Laredo, he remembers going to a movie with friends in the CCC and being forced to sit in the balcony. Other than that incident, he says he enjoyed his time with the CCC and that it helped to prepare him for the Army.

"Those [CCC] camps were under military orders, and we were dressed as soldiers," Martinez said. "When we were in the Army, I knew how to march and everything."

Martinez enlisted in the Army with a few friends in January of 1942, soon after Pearl Harbor was bombed, but they were soon separated.

"I knew that I was going to be drafted, and I didn't want to be drafted," Martinez said. "I wanted to be a volunteer. You know, when you're young, you don't know what war is, really."

After basic training at Fort Sam Houston in San Antonio, Martinez was sent to England with the 362nd Fighter Squadron, 357th Fighter Group of the U.S. Army. There, he worked a variety of jobs, mostly repairing vehicles and transporting equipment. He cannot recall the names of the friends he made there, but he will always remember one person: his wife, Kathleen Maud Feeke.

"One thing I won't forget is I married an English girl there," Martinez said. "It was one of those things. We danced, and we got friendly, and we started seeing each other. We finally agreed to marry."

Martinez had to first get permission from the Army, and he remembers the colonel jokingly asking his soon-to-be wife, "What did Luis tell you, that the streets were paved with gold?"

While in England, Martinez earned several medals and citations, including one for good conduct, a Distinguished Unit Badge, an American Theater Campaign honor, the Army of Occupation (Germany) Ribbon and The Victory Ribbon.

"I took part in D-Day, the longest day in history, they call it," Martinez said. "It was June the 6th. I don't forget that. It was my wife's birthday, too."

Martinez remembers the sound of the bombs from the American forces across the English Channel, but says he was frightened more by the bombs dropped on London by the Germans in the months before.

"It was terrible," Martinez recalled. "Every night [the Germans] would bomb, and London suffered a lot of damage."

After the war, Martinez was transferred to Germany as part of the American occupation. It was there in 1945 that he attended the funeral of Patton, who’d died in a car accident.

By the time he was discharged on June 18, 1946, Martinez was a corporal in the U.S. Army Air Corp’s 362nd Fighter Squadron of the 357th Fighter Group. He stayed in the reserves for 25 years but was never again called to active duty.

Martinez returned with his wife to the United States after he was discharged. They have seven children, four of whom have served in the military. Mrs. Martinez, who died two years ago, ran L&K Grocery Store, named after their first initials, and learned how to cook spicy Mexican food. When Martinez returned to Laredo, he went to college to learn a trade.

"When you get out of the service, you're lost. Nobody knows you," he said. He knew he needed an education, so he attended Laredo Community College, where he became a refrigeration specialist while working with the Texas Highway Department. Eventually, Martinez opened up his own air-conditioning shop attached to his house, which he designed in 1980.

"[The widows] are very glad to see that ceremony because they feel that we do care about that person," Martinez said.

Nowadays, Martinez likes to visit with his family, which has grown to 17 grandchildren and seven great-grandchildren. He also enjoys boating, hunting and fishing.

Mr. Martinez was interviewed in Laredo, Texas, on September 28, 2002, by Nicole Cruz.