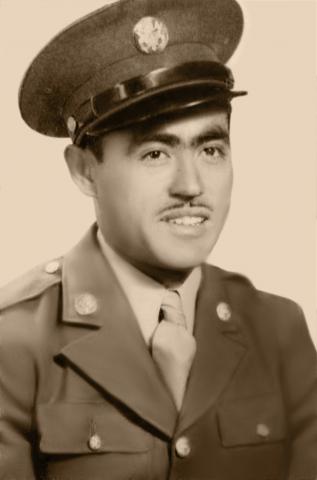 Feeling like a full-fledged American despite lacking a U.S. birth certificate, Luis Leyva never let his Mexican citizenship status affect his dedication to his adopted homeland.

Born to Mexican parents Guadalupe Ramirez and Josefina Lopez, Leyva was raised in Laredo, Texas, by adoptive parents Jose Angel and Francisca Leyva. Although the details behind his adoption elude him, he says his adoptive parents took him in as an infant when Josefina became terminally ill. He learned of his adoption when he was 11. His father would die one month after Leyva would depart for war.

Not all of his experiences in the U.S. Army were good, as Leyva came in contact with discrimination. In predominantly Latino-populated Laredo, he’d never experienced such treatment.

After leaving school at 15, he worked at vegetable picking, mortar mixing, carpentry and car mechanics until joining the Army. He was unaffected by the draft since his parents never legalized him as an American citizen. But even though he wasn’t a U.S. citizen, Leyva felt obligated to serve.

Before the attack on Pearl Harbor, he says he received a questionnaire in the mail asking for his voluntary participation in World War II, and he didn’t hesitate in saying yes.

"I know no other country," he said. "This is my country, this is where I live."

Leyva was with his future wife, Trinidad Medina, when he learned of the attack on Pearl Harbor. The two had just come back from St. Augustine church and were crossing the plaza when "suddenly everything stopped and they said Pearl Harbor had been bombed," he recalled. "We were afraid we would go to war soon."

Leyva would enlist in 1942. He remembers his first contact with discrimination. It happened when he invited some black cooks from the Army kitchen at Fort Knox, Ky., to the barracks to see pictures of his girlfriend. They told him they weren’t allowed in the barracks because of their race.

While he was bilingual, others deficient in English encountered another set of problems in trying to communicate with superiors. But the stigma of not being able to communicate wasn’t limited to the Latino soldiers.

"By the same token, there was a lot of Anglos who could speak English but they couldn't write their names," said Leyva, referring to the level of illiteracy at the time. "So they turned to me because I knew how to read and write and I helped them."

In basic training at Fort Knox, Leyva learned to drive and repair tanks. For target practice, soldiers would first line the cannon and periscope with two pieces of crossed string and aim for a white sheet hanging in the distance. The soldiers rode the tanks day and night to familiarize themselves with the equipment.

Leyva and his crew were shipped to a forest outside of Virginia, where they stayed at a deserted camp. They had no idea where they were and were told that all the information they learned was classified.

"We were 350 men surrounded by guards," Leyva said. "We were like prisoners."

Because their training involved stealth maneuvering, some of the soldiers were able to sneak out of the camp to find out approximately where they were. Upon their return, the other GIs learned they were near Virginia Beach.

They assumed they were going overseas but the rumors were quickly disproven.

"The general called us together around midnight and told us we weren't going overseas. We were going to stay and get special training ... to learn how to load the tanks into boats."

"They called us the demonstration regiment," Leyva said. "We were already experienced in those things and could show them how to do it."

Finally, the 526 Army Infantry would head to Europe, but not before undergoing amphibious training at Fort Story in Virginia. Among the skills he learned was how to blind the enemy through specials lights mounted to the tops of tanks instead of guns.

"You could see for miles with that light," he said.

Throughout his training in the desert, Leyva says he was questioned several times about his loyalty to the Army.

"They asked me why I wanted to fight, because I'm not an American," Leyva said.

He adds that he eventually proved his dedication through work on classified projects, and was told he could gain American citizenship as a result.

At the time of this interview, he was yet to receive his U.S. citizenship, however.

Leyva arrived in Liverpool not long after his training. His ship, the Queen Mary, was met by German gunfire.

"We were still on the boat and couldn't unload," he said. "It was so foggy we didn't know what was going on."

"I stood guard for Eisenhower in the sleeping quarters at night or in the daytime," Leyva said. "Those places were top secret. You had to have passes to go into each room."

When the war ended, Leyva was shipped back to New York Harbor with the other soldiers.

"It was wonderful. There was confetti all in the water and coming from the buildings and you could hear the music playing. And everywhere there were signs that said 'Welcome Home," Leyva recalled. "Every minute after I stepped into the United States was like a dream."

He returned to Laredo and met up in Corpus Christi with his girlfriend, Trinidad Medina -- mi prieta (my dark-complected one), he called her. They got married Jan. 6, 1946, and had six children: Jose Luis, Mary Alice, Linda Lee, Rose Anne, Frances Trini and Jessica Lucille. She passed away Jan. 29, 2001.