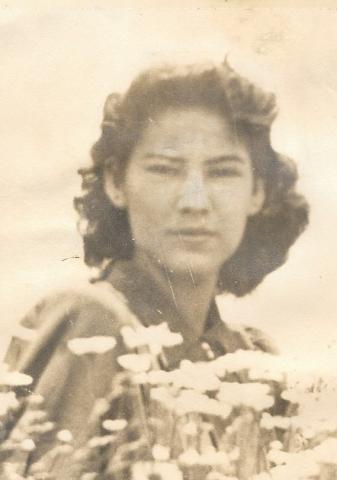 Like millions of other mothers and daughters, De Los Santos and Angelita spent 1942-1945 writing letters, preserving hope on the homefront, fervently worrying and praying that their beloved brothers and sons would return from some of the bloodiest battlefields in the world.

“The more I listened, the more I realized. I was shocked and surprised and couldn’t wait to tell somebody!” said De Los Santos, who was 14 at the time.

She watched anxiously as WWII erupted.

“It started a whole new way of life,” she said. “The little town was bursting at the seams. Everybody was rearing to go.”

Then the draft came: “It was either, ‘You come or we come get you,’” recalled De Los Santos, the second-youngest of 16 siblings, who watched as eight of her eleven brothers enlisted in the Armed Forces.

On his sixteenth birthday, her mother walked her youngest son, Al, to the post office downtown, where she signed his enlistment papers through blinding tears.

“I often wonder how my mother didn’t go crazy,” De Los Santos said. “For her to have eight sons away at the same time, and all different parts of the world.”

People in town relied on each other for strength, she says.

“When we did not hear or read [in the local newspaper] our boys’ names on the lists, we would go to sleep thankful that our prayers had been answered, at least for now,” she said.

De Los Santos and her mother made a Saturday evening ritual of going to the movies to see the current news reel about the European and Pacific war fronts. They watched the USO entertain the troops overseas, and “ships going this way and that.”

“It brought the war to us,” De Los Santos said.

Living alone with her mother, the women passed their “lonely, fear-filled” days praying for peace, longing for an end to the war and anxiously writing letters to brothers, sons, and a young love.

“Mama and I spent our days looking toward the sound of the postman’s step on the porch, hoping for mail from some of the boys,” said De Los Santos, adding that when letters arrived, they were months old and heavily censored by the military.

Regardless, they kept hope on the homefront alive … until one day in the summer of 1944.

The local telegram boy knocked softly on De Los Santos’ door, removed his green telegram cap and handed over a yellow envelope. The slip of paper delivered the heart-wrenching news that Charlie, one of her eldest brothers, had been killed on Omaha Beach in the invasion of Normandy. Charlie was one of the thousands of Americans listed as missing in action after the invasion. He was buried in Europe, never to return home to his newborn child.

Other telegrams came, each one shedding light on a brother’s whereabouts: Ernie, a member of the U.S. Air Army Air Corps, was shot down over France and was a prisoner of war in Germany. Cano was hanging on to life in Italy with a piece of shrapnel lodged in his heart – a result of a grenade explosion in a fox hole. Ray was mildly wounded while racing across France in the Third Army under General Patton.

In the Pacific, Jesse and Pete were engaged in hand-to-hand combat in New Guinea and the Philippines respectively – one shot in the leg; the other suffering a severe case of malaria. For Nick and Al, no news was good news. Nick served in the Navy upon the USS Escalante, an oil tanker used to refuel ships at sea in both the Atlantic and Pacific; Al was abroad the USS Yakutat in Guam and Saipan in the Pacific Ocean.

The Yakutat was a seaplane tender, basically a floating airport for seaplanes. During the war, both the Navy and the Japanese Navy built a number of seaplane tenders, which carried the seaplanes, their crews, their parts and supplies. Seaplanes were generally used for long-range reconnaissance patrols. The tenders allowed the aircraft to be rapidly deployed to new bases.

A flag hung in the family’s front window during the war was decorated with seven blue and one gold star, representing De Los Santos’ seven returning brothers and honoring the one who never made it back.

After the war, her brothers came back to Texas.

“Seven boys [returned] home as seven men,” De Los Santos said. “Some were not wounded, but they came home with horrible, horrible memories.”

They didn’t stay home long, however, each embarking on his own search for opportunity.

“We all went looking for the American Dream,” she said. “[The boys] wanted to live better lives, to have more, demanded more. None of us stayed there in that small town.”

In 1945, an 18-year-old De Los Santos married, Alejandro Santos of Laredo, Texas, another returning veteran. Santos had just returned home from serving in Europe. Married for 40 years, the couple had six children, one of whom, Alex, Jr., served in the Navy during the Vietnam War. De Los Santos now lives in Austin, Texas.

“War is bad. I hate to hear of it. I’ve been there done that, and I hurt for the wives and children,” De Los Santos said. “But I feel we are the better for having survived, even if we had to change. We grew stronger as life went on.”