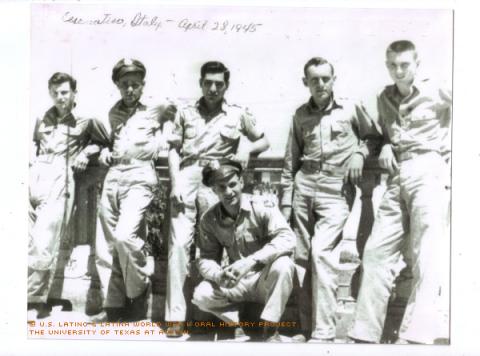 Even after flying several successful missions over Italy during WWII, Leonard Fuentes was prepared to continue serving his country, and remained in the military after the war, serving in Korea.

Fuentes graduated from high school and wanted to attend trade school, so he began working odd jobs near Kelly Field and began saving for his education. After Pearl Harbor, Fuentes was compelled to join the war effort.

Fuentes enlisted in 1943 and began training as an airplane mechanic and then as a pilot. The military sent him to Texas A&M University as part of the College Training Detachment Program, where he was one of only two Latinos in his class.

He then started his tour of duty overseas and flew eight successful missions over Italy during the war. He also tested planes to assess damages. He hungered for more combat, so after fighting had subsided in Europe with Germany's surrender, he volunteered to fly missions in the Pacific.

"I felt like I hadn't done hardly anything to help with the war effort," he said modestly. "I was fine and felt like I could still help."

His ship had made a stop in Panama en route to Japan when the war ended and he returned to the States. He remained in the military, working as electronic specialists and later serving as fighter pilot during the Korean War. Fuentes married Eva Cerda in 1946 and the couple had three children: Leonard, Robert and Linda.

He was discharged from the Army in 1953 with the rank of 1st Lieutenant. He eventually returned to school, graduating from San Antonio College in 1974. He then worked as a liaison between Kelly Field and Lockheed-Martin.