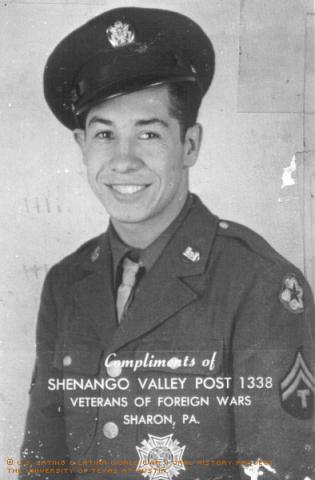 In the beginning of 1944, 22-year-old Tech. Pvt. Leon "Jack" Leura was among the American troops able to cross the raging Rapido River, and help gain control of Italy. That summer, a wounded Leura would be taken prisoner by the Germans, escape and then travel across Russia before he would return home.

Leura was in the 36th Division; Company A, 111th combat engineers. As a Tech 5th grade he discovered and destroyed mines.

After securing a rope across the Rapido River (40 miles South of Rome near Monte Cassino), Leura pulled countless soldiers across 50 feet of water for three hours.

"Many were taken away in the water, disappeared, and taken as prisoners," Leura said during an interview.

There were over 2,000 American casualties. A truce was declared between American and German troops so that both sides could help their wounded soldiers and to pick up their dead.

Back home, in Southern California, Leon Leura had fought a different kind of fight.

He was born on April 19, 1922, in Duarte, Calif., a little barrio town near Los Angeles. His doctor wrote Leura on his birth certificate instead of Luera. His parents, Norberto Gutierrez Luera and Tiburcia Muñoz Luera, migrated from Mexico during the Mexican Revolution. His father Norberto, was paid $15 a week to pick oranges, which his mother, a housewife, stretched to provide for the couple's seven children.

Young Leura started attending Davis school, the school for Latino children. Meanwhile, Anglo and Japanese children attended Duarte School. When he reached the eighth grade, he began working: cutting weeds, mowing lawns, taking care of chickens and upholstering furniture for $7 to $8 a week. He gave all of his money to his parents and kept 25 cents.

With his allowance Leura treated himself to a hamburger, soda and movie. In the theater, Latinos were forced to sit in the balcony.

At 17, Leura joined the Civilian Conservation Corps, created by President Roosevelt. He worked as a busboy in the cafeteria three days out of the week and boxed on his days off.

Next, Leura joined the CCC Camps in Pasadena, for six months and continued boxing. As a featherweight boxer, weighing in at 125 pounds, Leura won the CCC camp tournament championship and started boxing as an amateur.

"I was never hurt badly. I just hooked them a lot with my left and protected myself with my right," Leura remembered, while demonstrating his moves. "And I wasn't left handed."

His boxing career was interrupted when Uncle Sam sent him a draft notice.

Leura started in Marsh Field, Calif., trained in Fort Leander Wood in Missouri and trained in Nashville, Tenn. Later, he transferred to Grand City, Ill., where he learned combat training.

His next stop included New Jersey where he stayed for a week before traveling to Algeria in North Africa. He continued combat training for three months before invading Italy.

They continued onto Monte Cassino and Anzio, Italy, and to Rome where American soldiers were already stationed. In the next town, Serodivace, Germans gave up by the hundreds and the American troops traveled to Northern Italy without fighting.

Meanwhile, he started receiving letters from his sisters. While Leura tried to get in contact with his friend Joe Gil, his friend failed to respond, but Joe's sister, Betty, replied every week.

In August 1944, they arrived in Montelimar, France. While protecting the town Leura was wounded in his left shoulder. American troops did not have the firepower to fight the German tanks and were forced to give up. A couple of German soldiers found Leura and two other American soldiers.

"They saw that I was bleeding, they talked amongst each other, one of them said to go with him, and I thought he was taking me to kill me. He took me across the river, and kept walking towards a big tent, a field hospital," Leura said.

The German soldiers walked him to the back and started working on his wounds.

"They patched me up really good, stopped the bleeding and they gave me tetanus shots," Leura said.

The Germans gave Leura a big loaf of bread and sausage, and two cigarettes. Then, the Germans put the prisoners in boxcars with other American prisoners and they joined 2,000 other officers in camp.

For six months they had coffee in the morning and one bowl of soup in the afternoon.

"The guys who had been there a while looked very skinny," Leura said. "We played cards, played checkers, played with balls provided by the Red Cross."

After being in the camp for six months, Leura and 40 soldiers escaped when Russian shells started destroying the camp. They ran toward Russian combat zones and reached Russian troops. One Russian soldier guided them toward Poland.

"We came upon a town; all the buildings were broken, like a lot of stores. All the people were hiding. There was a store with a lot bicycles. We got a bicycle each and started pedaling toward Poland," Leura said.

When they reached a Russian convoy heading toward Poland, they jumped on the trucks. In Poland, they took a train to Russia. Leura's next adventure took him through Ukraine and to Siberia. When they reached Odessa, they were detained in a building for a couple of days until they were ordered to walk to the Odessa Port. British naval officers told the Army prisoners to board the ship. The Americans learned they were part of a trade.

"They told us, 'We found out that the Russians were holding you all in a building in town, we told them we would not deliver any goods unless they traded you all for the goods,' " Leura said.

Leura traveled across the Black and Mediterranean Seas and back into American headquarters in Italy. After a week, Leura finished his service and traveled back to Boston, and then back home to California.

Leura returned on April 14, 1945, and started working in the heater and air conditioning industry. Soon, Leura married Betty Gil (the sister of the friend who had written to him) and had two children, Sylvia and Michael. He continued boxing until 1949 and won 29 out of 35 fights. After his wife died in 1966, he remarried in 1975 to his current wife, Rose Velasco. Today, he hopes nobody else has to experience war.

"I was very fortunate of going through what I went through, the two combat lines and back home again without getting shot by the enemies, the Germans and Russians," Leura said.

Currently he is the commander of Ex-Prisoners of War organization, Kustrin-Stalag.III-C, in his area.