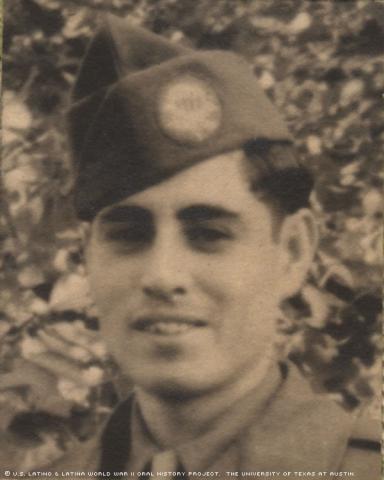 Leon Eguia has kept silent for many years, never inclined to share his feelings about World War II with anyone, not even his family.

"I saw a lot of things," said Eguia, who opened up during a recent interview. "So I put a wall between me and my feelings. Otherwise, I would become crazy."

Eguia was born Nov. 13, 1921, in Houston, Texas, to Narcisco C. Eguia and Mari¬a Lara Eguia. The Eguias had six children, two boys and four girls. Growing up during the Great Depression, Eguia and his brother would shine shoes on Saturdays, contributing their earnings to help support the family.

Eguia's mother died of an intestinal ailment when he was 15 years old. Their father raised them alone, never remarrying.

Although Narcisco wanted Eguia to quit school and secure a full-time job, Eguia resisted his commands and graduated from high school.

"My father was from the old country . . . he didn't believe in education, only work to make a living," Eguia said.

While still a student, the one concession he made to his father involved after-school work. Eguia found employment at Stein's clothing store, earning $1 a day after school, on Saturdays and throughout the summer. Eguia said he learned how to sell suits and perform alterations at the clothier.

While growing up, Eguia said he faced discrimination, but cultural pride helped him overcome prejudice. Some incidents remain etched in his memory, however. For example, while Eguia was visiting his grandmother one day in Lockhart, Texas, he entered a drugstore wearing his U.S. Army uniform.

"'We don't serve Mexicans here,'" he recalled the female clerk telling him. "To this day, I haven't stepped inside that store."

Unlike in his hometown, Eguia said he never experienced discrimination while in the service. On the contrary, he said, everyone was always willing to lend a helping hand.

"It's all about real comradeship," he said. "You look out for each other and at the same time have some fun."

Eguia had wanted to join the Army since he was very young, but his father wouldn’t sign a permission slip for him. At the age of 20, however, he was drafted into the service. He went into the Army and eventually became a paratrooper, serving as a sergeant in Company C of the 307th Combat Engineer Battalion, part of the 82d Airborne Division.

He began with six weeks of basic training at Texas’ Fort Sam Houston before being transferred to Camp Roberts in California for six months and sent to a combat engineer company in the Mojave Desert. Later, he was transferred to Camp White, Ore., where he was promoted to Sergeant. He then attended paratrooper school, arriving in Fort Benning, Ga., in October of 1943 for six weeks of jump training.

Eguia recalls his fear during training on the night before he was scheduled to jump. An instructor noticed this and went to talk to him.

"'I've never seen a Latin American who failed to jump out,'" Eguia recalled the man saying.

The words worked: "It shot adrenaline in me," Eguia said.

After graduating from jump school, he underwent six more months of training in North Carolina and Tennessee, where he was trained in night jumping, map reading and weaponry. On August 12, 1944, he was sent overseas from Boston, landing in England on August 25, 1944.

Training in England until being flown to France, he was ultimately sent to Belgium, where he fought in the Battle of the Bulge.

"We were baptized into battle on Christmas Eve, 1944 and spent the next six weeks living and sleeping in snow-covered foxholes and eating 'K' and 'C' rations," wrote Eguia after his interview.

Once on the battlefield, he came close to death. But he was undeterred in his mission, adopting a stoic, single-minded focus: "You don't think about those things," said Eguia, referring to the inherent risks of war. "What's going to happen is going to happen."

By the end of the war, Eguia's battalion had fought across the Ruhr industrial area and was on the banks of the Elba River, where they linked up to Russian forces. In crossing the Rhine River in Dusseldorf, Germany, many paratroopers didn't make it, getting "blown out of the sky" or crashing into trees, Eguia recalled: "I saw a lot of gliders hit many people and saw them burn."

Another vivid memory involves a German soldier's death when "a tank came and ran over his head," said Eguia, who added that these traumatic encounters prompted him to remain emotionless during combat.

"I had to do something to survive,” he said.

On Dec. 19, 1945, Eguia was honorably discharged from the service. He returned to Houston, but was unable to find work. He decided to move to Corpus Christi, Texas, to search for a job, finding one as a tailor at a clothing store. Eguia also was a firefighter for the Houston Fire Department for 20 years, retiring at the age of 55.

He met his wife, Antonia Ramirez, through a friend who also worked at the clothing store. Less than two years after they met, on Jan. 23, 1949, they got married. They moved back to Houston, settled there and had four children, two boys and two girls.

After the war, Eguia took an active role in his community. He was a member of Council No. 60 of the League of United Latin American Citizens (LULAC) in the 1950s, and remains active in the Knights of Columbus and his Veterans of Foreign Wars post. He’s also active in his parish, Houston's St. Patrick's Church, serving as a Eucharist minister.

Eguia enjoys traveling with Antonia, having visited places throughout the United States, Europe, Hawaii, and Mexico. He says his next stop is Puerto Rico or Canada.

Although he isn’t wealthy, he feels personally enriched.

"I might not have $20,000 in my pocket, but I'm rich," Eguia said. After his interview, he wrote: "I have a wife, four children, 10 grandchildren, two great-grandchildren. This is God's wealth to my wife and me."

Mr. Eguia was interviewed in Houston, Texas, on March 2, 2002, by Liliana Velázquez.