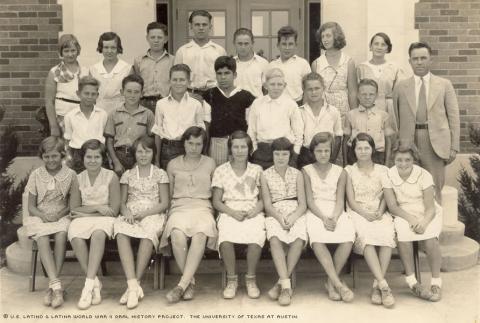 As an immigrant from Juarez, Mexico, living in East Los Angeles in the ’20s and ’30s, Leno Flores Díaz remembers going to school in hand-me-downs and feeling ostracized when the teachers anglicized his name.

“They had all kinds of names. They never could pronounce my name. … It was discrimination, racism,” said Díaz, adding later in writing that whenever there was trouble at school, he was always called to the office as a suspect.

Missing school to help his family pick seasonal crops, combined with his limited English proficiency, exacerbated Díaz’s educational challenges. Yet, as he experienced his parents’ struggles to provide for a family of 12 with little education, he refused to let discrimination and disadvantage kill his hunger for learning.

Despite this desire, Díaz only completed school through the eighth grade before leaving to work as a seasonal laborer, circus hand and garment presser. When the United States entered World War II in 1941, he says he tried to enlisted, but was turned away from every military branch.

“I was a Mexican national, that’s why I was not accepted,” he said. “I felt real strongly that we were fighting enemies that were really trying to destroy us. … Although I was not an American citizen, I felt that I wanted to go. … Living in the ghetto I couldn’t get ahead, and that too prompted me to try to be accepted in all the branches.”

He later added, “I could have returned to Mexico, but I didn’t. That was the coward’s way.”

Díaz’s life changed, however, when the U.S. began the draft in 1942. He began active duty on Nov. 21, 1942, serving in Japan and the China-Burma-India Theater during his three years of service, according to his military record.

Though many WWII veterans’ stories are of tragedy, loss and discrimination, Díaz’s tale is one of an educational journey.

“It wasn’t a hardship. I live[d] a good life. No trauma, no wounds,” said the 88-year-old husband, father of two and grandfather of three. “I got shot with other things: ambition, desire to become better educated, that was my shot, that was my wounds – and the fact that I got culturally educated.”

WWII helped him advance from uneducated laborer with few opportunities to educated middle-class citizen, he says. Like many of the roughly half million Latinos who served in WWII, he utilized the educational benefits afforded by the G.I. Bill, and the somewhat elevated status given to veterans, to improve his station in life during a time when discrimination severely limited Latinos’ opportunities.

“I didn’t want to be a presser all my life. I wanted to be educated … so the war for me, as far as I’m concerned, was a great opening, an opportunity,” he said, sitting in an armchair in his art-adorned San Antonio home. “That’s what propelled us to become middle class. That was the beginning of the civil rights for us.”

While serving in the China-Burma-India Theater, he was one of only two Latinos in his Air Force company, where he worked as an airplane mechanic. He only remembers encountering blatant discrimination once during his service, however.

“There was this Jewish sergeant. He told me that I had three strikes against me because I was Mexican,” Díaz said.

Yet discrimination didn’t impede the company members, who hailed from every corner of the country, from forming a familial bond, he says.

“I got the wonderful experience to know people from different cultures, different sections of the country, different dialects, accents, education. And that was part of my education,” he said. “We worked together, we fought together, we drank together, we played cards together. … It was a family.”

Díaz used his wartime experience abroad as an opportunity to travel and study, from visiting temples in Calcutta to learning a bit of Hindustani. He was discharged Nov. 20, 1945, at the rank of Sergeant.

After the war, Díaz returned to his family in Los Angeles, and worked as an electrician for some time before passing the GED and deciding to pursue a higher education. He earned his bachelor’s degree in elementary education from the University of Texas at El Paso in 1953 and became an elementary school teacher. He eventually earned a master’s in school administration from California State University and headed up the English as a Second Language Program at a school in San Bernardino, Calif. After more than 25 years of teaching, he retired in 1979.

Díaz says several elements in his life infused him with a hunger for education: his poor upbringing after migrating to the U.S.; his wife, Elisa D. González; his military service and a few inspiring friends and teachers. He says he passed this passion onto his students and children, who’ve both pursued higher education.

Despite his improved prospects, Díaz continued experiencing discrimination after he returned home from the war. For example, when he began teaching in California in the ’50s, he says a teacher asked him if he was the new janitor.

“They hired me because they needed a Mexicano, not because they really wanted us,” he said. “I didn’t care, because I said, ‘I’m going to prove that I’m able to do it.’”

But the discrimination was never overwhelming. He says he approached each incident with the desire to prove prejudices incorrect.

“We suffered, yes, but not to the point where we became angry and blamed society for it and cursed the Anglos for it. We didn’t get to that point,” he said. “We knew that it was the Depression time and we knew that the whole United States was poor, so we managed.”

Today, Díaz uses his vast experience to volunteer, remaining active in local politics and community organizations. At the time of his interview, he’d been married 58 years to Elisa, a retired teacher. He expresses few regrets, one of which is having altered his name.

“Because of the difficulties that I had in schools pronouncing my name, when I became a citizen [on Nov. 5, 1943,] I changed it from Magdaleno to Leno,” he said. “At this point, I regret that I changed it.”

Other than the loss of his birth name, Díaz says he bears few scars from the discrimination he faced in California. The war was the start of a new life, one rich with opportunities, he says.

“So those episodes, those parts of my life, are the ones that have enriched my life. They made it possible for me to do what I’m doing now,” Díaz said. “A lot of people say, ‘You have lived a full life’.”