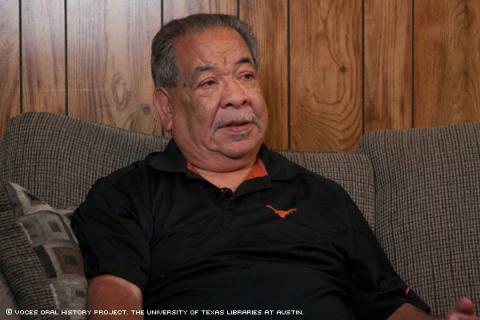 Retired labor organizer Lawrence "Lencho" Hernandez is still haunted by his elementary school principal's big green disciplinary paddle. That paddle would snap him in a direction that he would later regret.

"I had straight As in school. I had the highest GPA out of all of the students," Hernandez said. "But I could never please [him]."

After repeated attempts to win the principal over, Hernandez's pent-up anger and frustration eventually got the better of him. One afternoon when Hernandez was in eighth grade, the principal drew his arm back to hit him, so Hernandez snatched the green paddle away.

Lencho Hernandez was kicked out of school and recalled this incident with anger. He still wondered whether he would have graduated from high school and gone on to college, if he had kept his mouth shut and resisted fighting back. Hernandez said he felt that the principal didn't like him because, even as a youngster, he was outspoken and stood up for his beliefs.

Hernandez also recalled that, rather than deterring him from defending his beliefs, this incident inspired him later to fight for his rights. He would go on to a career in collective bargaining, leading boycotts and strikes - including the Economy Furniture Strike of 1968-1970. That strike, which included calls for a national boycott, was known as the Austin Chicano Huelga. It also led to major developments in political representation for Hispanics in Austin, Texas.

Hernandez was born in Austin on Sept. 5, 1942, to Carlos Hernandez, a truck driver, and Concepcion "Connie" Barrera Hernandez, a recipe maker for the Austin-based Caliente Chili Co., makers of the famous Two-Alarm Chili Kits. The couple had five sons and three daughters.

Lencho Hernandez dropped out of school in 10th grade, but eventually earned an equivalent diploma.

Later, he went to work as a sander for the Milton T. Smith family at the Economy Furniture Co., in East Austin. Milton T. Smith, owner and operator, was widely admired as a humanitarian and philanthropist for three decades.

"He may have been giving to other communities," said Hernandez. "But he was definitely not giving back to his workers."

Hernandez said that the workers were hard-pressed to survive on their meager wages and complained that their supervisors were disrespectful toward them.

"Most of the supervisors were White, and they would say the word 'Mexican' in a derogatory manner," Hernandez said. "Their tone is what made their words offensive. It doesn't matter what they said, it was how they said it that made it derogatory." But Hernandez kept quiet because he did not want to lose his job.

Eventually, in May 1968, the workers voted -- 252 to 83 -- to organize as a union and bring in the Upholsterers' International Union to represent them. Company officials refused to recognize the vote, leading to the Economy Furniture strike, which started six months later, on Nov. 27, 1968. Hernandez became a leader of the strike, under direction of the union, which was affiliated with the AFL-CIO.

At the time of the strike, Economy was the largest furniture manufacturer in the Texas, New Mexico and Arizona region, according to the Texas State Historical Association account, which was based on the University of Texas Libraries Benson Latin American Collection. It also said that 90 percent of Economy Furniture's 400 workers were Mexican-American, of which a quarter were women. They were paid less than $2 an hour, even after 15 years of service. (In 1968 dollars, the federal minimum wage was $1.60.)

With Hernandez's lead, the workers started a daily picket line outside the company headquarters that attracted the attention of United Farm Workers Union President Cesar Chavez. Hernandez and Chavez quickly became friends, united under a common cause.

"I really loved the guy," Hernandez said through tears as he recalled the famous agricultural labor activist, who died in 1993.

Hernandez had also seen firsthand leadership through his father's actions. As a child, he saw his father, Carlos, lead a group of neighbors to complain to the Austin City Council about the stink coming from a big red container near the railroad tracks behind their homes. The city removed the tank, and with it the smell went away. From then on, Hernandez's parents preached to their children to get involved in politics to improve their community and their lives.

Years later, the furniture company strikers became involved in the campaigns of some of Austin's first Hispanic political leaders.

"[We] would tell the other picketers that, if they wanted to go help with the campaign instead of working at the picket line, then that was OK," Hernandez said.

With help from the strikers, they elected Richard Moya as the first Travis County commissioner who was Hispanic.

The local Hispanic community also rallied together to boycott the sale of Economy Furniture products at local shops and the big Montgomery Ward department store.

"They had a lot of help because there were 350 families who went out on strike, and all of those families were big and had a lot of friends. So that covered most of the Mexican neighborhoods," Hernandez said. "That really helped.

"What also helped was meeting with the priest during the strikes and, since most of the people were Catholic, they went to the priest for help," he said. "The priests sent three of their priests to picket every Friday. Father Joe went every Friday to help picket."

The company went to court to challenge the National Labor Relations Board's certification of the union-organizing vote. The U.S. Fifth Circuit Court of Appeals upheld the labor board's certification of the workers as a collective bargaining unit and ordered Economy Furniture to negotiate a contract with them. The workers voted to end their strike.

The following summer, the two sides met over two months to hammer out a new contract. The union's negotiating team included Mexican-Americans. The group agreed to a 3\0xBD-year contract, which was approved by a majority of Local 456 members in September 1971. It provided for wage increases each year, seniority, overtime, additional vacation, and other benefits.

Hernandez was later hired by the upholsterers' union and was assigned to work in Chicago, where workers were picketing another furniture manufacturing company. When he arrived in Chicago to help with the strike, he realized the conditions and the people were similar to the Economy Furniture strike -- with the exception of one individual.

Every day Hernandez noticed one woman who chanted a little louder than everyone else. She was always dancing and singing and often times she would bring her children out to the picket lines.

"She was so loud and had so much passion," Hernandez recalled. "There was something special about her, so I pursued her."

Hernandez and Josefina Villasenor got married and continued to fight for their rights together in Chicago. Eventually, they moved back to the Austin area with their family, where they lived at the time of the interview in a quiet neighborhood. Between the two of them, they have seven children

"I'm not loud like I used to be on the picket line and at the rallies," Hernandez said.

Even though he has quieted down since then, he believes sometimes you have to be loud to get your people enthused.

"You have to get the people to believe," he said. " 'Si se puede, creyendo,' meaning 'Yes you can, if you believe' is my motto."

Mr. Hernandez was interviewed by Paige More in Bastrop, Texas, on April 16, 2014.