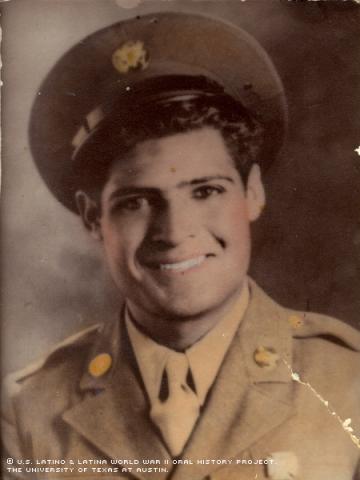 By Miguel A. Castro

Lauro Vega distinctly remembers being in England and anxiously waiting to receive orders from the 197th AAA Battalion, the company he was in.

"They told us, 'All you fellows will be in an invasion but we don't know where or when,'" Vega said. "They knew but they didn't want to tell us."

On June 4, 1944, it would be a friend's reaction to a delicious meal that would convince Vega that the 197th AAA Battalion would finally be shipped out to be a part of an invasion.

"One day they fed us fried chicken, potatoes, gravy and all that. It was a good meal -- the best meal we had," Vega said as if he could still smell the aroma under his nose. "A buddy of mine said, 'We're not getting this meal for nothing. I bet you we're gonna go to the invasion already.' By God, he was right."

After that meal, Vega and the 197th were loaded onto Navy ships; he received amphibious training for an invasion.

"Before we went to invasion, they had us in a big camp, a marshalling area, and everybody was there, all troops that were going to go to the invasion. We were there for about a week, nobody could go in and out. In other words, it was secret, you couldn't phone, you couldn't camp," he said. "They showed us a big map, they said maybe it’s Norway, maybe it's France, they didn't want to tell us. Once they ... they gave us little small ones, everybody got in French and English dictionaries, so we said, 'ay, we're going to France.'"

The 197th was assigned to go onto Omaha Beach, where they would give the 16th Regiment anti-aircraft support. The 16th Regiment, part of the 1st Infantry division, was the "first wave" of the D-Day landing.

"Before we landed, you could look back, and as far as your eye could see, there was all kinds of landing crafts," Vega explained. "In other words, I was just one of 1,000 guys that were landing. I wasn't by myself and that way I didn't think anything could happen to me."

Vega believes this is the reason he survived not only the D-Day invasion, but also the war as a whole. He continued his service in Europe with the 197th AAA Battalion until November of 1945.

Vega's was born in 1923 in Southern California. His parents, immigrants from Mexico, would have 10 children; he was the oldest.

When Vega started school at age 6, he was not aware he and his neighbors were being segregated.

"In the barrios, at that time we didn't think anything about it, but it was segregated," he said. "If there were whites in the neighborhood, they had to go to another school a mile down."

Vega remembers students being reprimanded for speaking Spanish at school.

"They said, 'When you come to school, here it is all English, because this is an English-speaking country and we speak English and that's all," Vega recalled.

He not only had to face segregation, but also had to deal with being so poor that he had to go to school barefoot until the fifth grade and eat whatever scraps awaited him behind food stores.

"We didn't starve. I was always eating something," Vega said. "We'd go to the back of the stores and they'd throw stuff away and we'd go and eat it."

Francisco Vega, Vega's father, was a farmer. He also planted a vegetable garden that provided many nutritious meals.

"He would plant corn, beans, tomatoes, stuff like that," Vega said. "That helped us out a lot in those days."

At the age of 17, Vega helped his family by dropping out of school and going into the Civilian Conservation Corps.

Beginning in 1940, Vega served for a total of six months in the CCC’s Camp Vista, located near Escondido, Calif.

After his service with the CCC, Vega went to work for a Consolidated Aircraft plant, where they built B-24 bombers.

Vega was drafted and began his basic training at Camp Callen in California.

Since he’d worked with Consolidated Aircraft, he was then sent to an anti-aircraft training camp at Fort Bliss in El Paso, Texas, where he went into the 197th AAA Battalion.

From El Paso, Vega went to Camp Picket in Virginia, where the 197th trained for landings such as the D-Day invasion.

Finally, in 1944, the 197th was sent to Camp Kilmer in New Jersey, where they boarded the Queen Elizabeth and traveled to England.

"I got to know these guys and we were one great bunch," Vega said. "To me, they were great guys and I wanted to go with them."

Vega is thankful to have made it out of the war alive, but admits there were a few times he knew he could have died.

He remembers one time when a shell landed close to him and killed one of his friends.

"This one came and my buddy Jack didn't duck, so it got him," Vega explained. "I ducked, but still the concussion knocked the breath out of me. I could feel the powder inside of me when I breathed."

When Vega caught his breath, he got up, and to the side of the foxhole, he found a piece of shrapnel that would have blown off his head if he hadn’t taken cover.

Toward the end of the war, Vega remembers seeing how desperate the Germans were to be taken prisoner by the Americans rather than the Russians.

"They found out later they were better off with the Americans," Vega said. "They figured the Americans would take them prisoner. The Russians would kill them."

Vega believes the reason the Russians wanted to kill the Germans, rather than take them prisoner, was the Germans had gone into Russia and destroyed and burned homes and killed civilians.

"The Russians were out for revenge, the Americans weren't," he said.

One thing Vega will always remember about the war is one time when some unarmed German soldiers approached him and some other soldiers to surrender. One of the Germans came up to Vega and began speaking to him in Spanish.

"I asked him where he learned Spanish and he said that he used to live in Mexico before the war," Vega said.

The other American soldiers decided against taking the prisoners because they would have to feed them; the Germans were sent home.

Vega and the 197th continued marching through little towns in Germany because they were told they would have to go and fight in Japan, even though the war in Europe was over.

However, because of the dropping of the Atomic bomb on Japan, they didn’t have to go and fight.

In November of 1945, the 197th and Vega, who was 22 years old, was taken to Southern France and then shipped off to Newport News, Va.; he was discharged in Northern California.

Coincidentally, when he returned home, he and his brother, Salome, talked about how they had gone to the same village while serving in Europe.

"We didn't know it at the time, but there was a village where he went and then I happened to go by a few days later," Vega said. "The town was Vara and it was in Eastern Germany. That was about one month before the war was over."

After the war, Vega labored as a construction worker, carpenter and truck driver. He also married Nina Villalobos in 1951. The couple had five children, two girls and three boys.

It was also after the war that Vega began to see himself more as an American than as someone of Mexican ancestry, because people began to treat him differently, with no discrimination, he said.

"I tell people I enjoyed my life because I went over there," Vega said. "I went to France; I would never have gone to France or England if it wasn't for the war. I would have never gone to all them countries and saw different people and the way they live."

Vega said he was glad to have fought in the war because when he was there, he felt he was "representing the United States and National City and preventing this from happening in my home town and country."

Mr. Vega was interviewed in Chula Vista, California, on October 8, 2000, by Rene Zambrano.