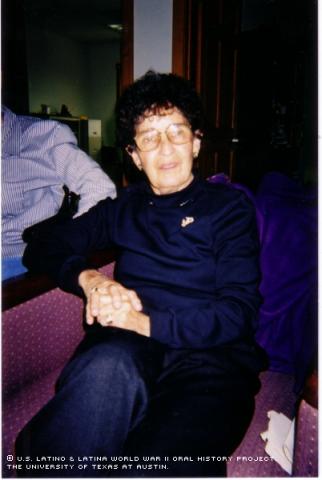 While scores of Latinos served their country valiantly during World War II, many women did their part on the home front.

Juanita Tapia Montoya vividly remembers wartime rationing back home during these years, when the U.S. government limited the purchasing of items such as sugar, meat and other materials needed for the military. Families had ration-stamp books to use to purchase goods.

"In those times, we didn't care if we didn't have turkey on the table at Thanksgiving," said Montoya, recalling what it was like adjusting to rationed food. "Everyone was poor then because of the war ... in those days, we didn't have the good things; we just made do with what we had."

Growing up, Montoya was the youngest of 14 children: eight brothers and five sisters. Her father, Pedro Tapia, died when she was 18, after which point she lived with her grandparents until she got married.

Montoya was introduced to her husband, Maclovio Montoya, in 1945 by a friend of hers. After meeting, Maclovio began sending Montoya letters, and they soon got married. Together, they had five children.

When Maclovio was sent to Korea in 1950, Montoya stayed at home raising their two young children. Her husband sent money home, but with only an eighth-grade education, she still had economic challenges. Montoya recalls her family had to struggle without running water or heat.

"Times were difficult," she said.

Montoya had to bring in pails of water to drink and clean. She also chopped wood to warm the house. During part of the time her husband was away, she became ill, and had to carry on the work of caring for her family.

Perhaps more difficult was being separated from Maclovio.

"I went through the mail three times a day,'' Montoya recalled. "And when I didn't get mail for months, I felt real bad. I got real worried something happened while he was there. I couldn't wait until he got back."

When Maclovio did write home, his letters were short because he had to be careful about what information to divulge. In his correspondence, he’d tell his wife not to worry and that he’d be home soon.

Montoya says she turned to religion to help her through this difficult period, praying every day for Maclovio to return home safely.

"It was hard," she said. "My son used to go pray to San José, so that he would come back."

Maclovio finally did, and Montoya was ecstatic to have him home.

"I give thanks to God he is alive and complete," Montoya said. "We had a wonderful life when he came."

The Montoyas have been married for 56 years. They have 12 grandchildren and eight great-grandchildren.