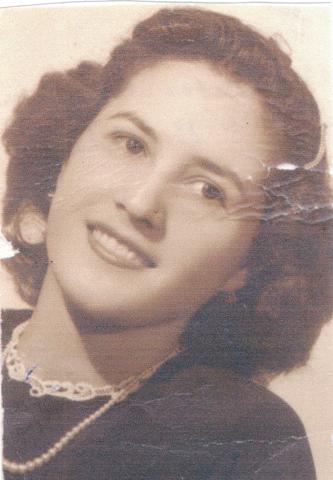 Estela Gonzalez Chapa's experiences during the war may not have all the drama and suspense of typical war stories; she was living in Rio Grande City, in South Texas. But her memories of the war provide a glimpse of what life was like for young women back home.

During the war, there were simple efforts to help the soldiers: her Glee Club visited nearby Fort Ringgold to sing to soldiers stationed there. In her English class, she wrote letters to faraway soldiers in an effort to brighten their days. She and her classmates never even knew the soldiers' names.

"We just talked about what we were doing, like going to our ranch and horseback riding, just to make them feel good."

In her homemaking class, she was part of an assembly line that pieced sweaters together to send to the men overseas.

"I was so tired of that army green," Chapa said, as that was the only color they used for the sweaters and vests.

Chapa attended secondary school at Rio Grande High School in Rio Grande City, Texas. Schoolwork came easily to Chapa. She excelled in all of her subjects and graduated in the top 10.

The Gonzalez family consisted of Chapa's parents and 11 children. Three of the boys served in the war. One served in England and saw no battle, another was badly injured and the third died during the Normandy landings.

The most action the brother in England, Julian, could write home about was the queen riding in a parade. Chapa's father liked to joke that they never knew what their son was going to be next ... the first time he wrote them as a private, soon afterward, he was a corporal, then a sergeant, then a corporal again.

The oldest brother, Santiago, was hit in the head by shrapnel and was fitted with a metal plate. He could not stay in the sun for any extended period of time without his head getting too hot.

The third son, Regino, had turned 18 as he journeyed to the battle front. He was killed shortly thereafter during the fighting in Normandy. His death shook the household and devastated their mother.

Chapa remembers well the first few boys to leave her hometown and join the war effort. One of her best friends, Homero Guerra, survived being a prisoner of war in the German camps for three years. Two others that went were named Arcadio Canales and Alfredo Salinas.

"They went and registered 'cause they knew they were gonna be drafted," she said.

Both Arcadio and Alfredo were killed. The entire town of Rio Grande City would mourn the deaths of these young heroes and many others.

"I recall a lot of people crying," she said.

Despite the losses of her brother and a few of her good friends, Chapa's direction in life was not altered much by the war. She was named Rodeo Queen during her senior year.

"Staying on a horse for three days [from 10 a.m. to 10 p.m.] was no fun!" Chapa exclaimed.She finished high school just before her 17th birthday.

After high school, she took a year off and then left home to live with her sister and her sister's husband in McAllen, Texas, where she attended Pan American Junior College. Though she wanted to go to the University of Texas at Austin like many of her friends, she stayed at Pan American to appease her father. The school was soon turned into a four-year university and Chapa was able to get her bachelor's degree and certifications in both elementary and secondary education.

Shortly before she graduated, she threw a small party. A friend of hers was working with this terrific guy at a high school in Roma, Texas and asked that he be invited. Robert Chapa accepted the invitation, but as it turned out, he was not interested in her friend, but rather in Estela Gonzalez. He "pestered" her for a couple of months, she says now, and she finally went out with him. Less than six months after the party, Estela Gonzalez became Estela Chapa.

In the summer of 1952, when Robert Chapa was finishing the necessary work to obtain his administrative certificate and Estela Chapa was taking an English course at Southwest Texas State University, they encountered discrimination. She and her new husband were denied a place to stay when the leasing agent realized that the light-skinned Chapas were Mexican.

"The lady was willing to rent the apartment to [Mr. Chapa]," she recalled. "And then he beckoned his [darker-complexioned] brother to come over to sign the lease, and when the lady saw his brother she said, 'I'm sorry, but we don't rent to Mexicans.'"

Maddened by the lady's words, Robert Chapa went to the dean of the university. He provided modest accommodations for the Chapas. They used a room where the football players used to stay. Their beds were cots and their showers in a community bathroom that consisted of sixteen showerheads.

"We only used one," she says. "I wasn't going to clean that many showers!"

Mr. and Mrs. Chapa wasted no time starting their own small family. About a month and a half after their first anniversary, she gave birth to their first child, Roberto Chapa, Jr. Ten months after that, Robert Jr. had a little brother named Ricardo. Estela Chapa took time off of work to become a full time mother, a 168-hour a week job. She did, however, get some time off, thanks to the help of a nanny by the name of Aminta. Aminta dedicated much of her time to the two boys that loved her.

"My kids were trying to take Spanish," she said, and Aminta was happy to teach them. She was a large part of the boys' life from the time they were infants to their move out of the Valley during their junior high years.

Chapa first started teaching at Rio Grande High School. In 1967, the Chapas moved from Rio Grande City to Austin and Estela Chapa worked at three different elementary schools for a total of 30 years. She retired in 1990.

Chapa has never passed an opportunity to enrich her life. She has expanded her knowledge with some graduate work in education at the University of Texas at Austin. She and Mr. Chapa took the boys on numerous vacations to military bases all over the country. Mr. and Mrs. Chapa went to Europe in 1984. Like many people who go to the continent, they visited museums and monuments. They have also taken trips to Mexico and have seen the artifacts and historical buildings there. Now that Chapa is retired, she belongs to many clubs, including a garden club and a quilting guild. With all of these extra curricular activities, Chapa still finds time to spend with her two sons, five grandchildren, and the youngest Chapa of all, her great-grandchild.

Chapa has led a life full of experiences and successes. Her advice to younger generations so that they might so the same is to "just so your best, study hard, and be yourself" and probably most importantly, "accept guidance."

"Be tolerant of your parents, of your grandparents, they're guiding you the right way, not the wrong way," she said. "So, if you want to make it and be happy too, "keep on trudging!"