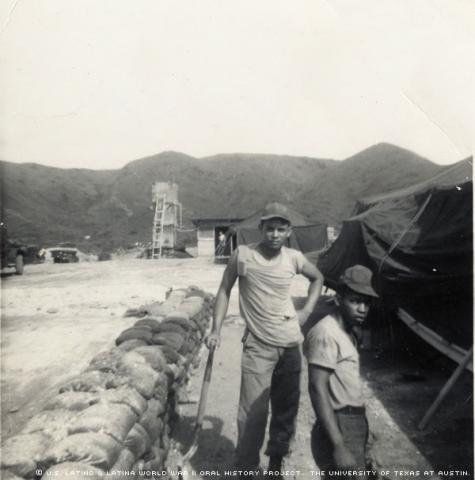 One of the most vivid memories of the Vietnam War for Modesto Sanchez occurred moments before he boarded the ship that would take him to war and change his life forever.

“President Lyndon B. Johnson passed by to check on the troops and he asked me, ‘Where you from Sanchez?’ and I answered, ‘From Aguada, Puerto Rico, Mr. President,’” Sanchez said. “Meeting the president is one of the greatest things I could have experienced in the war.”

Although far away from his native island, Sanchez was ready to fight for a nation he did not call home.

Born into a large Puerto Rican family, Sanchez had dreamt of being a pilot in his youth, but a lack of money made that impossible.

“The poverty of those times did not provide for parents to send their children to the university,” Sanchez said. “With the little my father had, he helped us the most he could.”

After finishing some schooling, Sanchez worked as a mechanic and welder in his home town. This skill would later help keep him alive during the war.

His decision to participate in the Vietnam War came at a time when his life was stable and secure.

“I was working in the sugar industry and was making good money,” Sanchez said. “When I enlisted, my boss questioned my decision and said soldiers go to war to be killed.”

Despite objections, Sanchez had made his decision. On Nov. 3, 1965, he enlisted and by December 30 of that same year, Sanchez was onboard an airplane to North Carolina, where he began strenuous military training.

The United States welcomed him with freezing temperatures and mounds of snow.

“I never knew what the cold was,” Sanchez said. “We had to march in the cold and train in the cold.”

It was during this arduous training, that Sanchez experienced his first taste of racial discrimination.

The clash of languages and cultures created a tense environment between the trainees.

“The white Americans thought they were superior just because we were Latino and didn’t speak their language,” Sanchez said. “It bothered them that we, who were supposed to be weaker, still could be first in things like exams.”

Sanchez was part of a training unit for mechanics, and although he received professional education on the subject in Puerto Rico, he purposefully failed the test.

He was persuaded to stay in the program and eventually graduated alongside 600 trainees. As he had hoped, Sanchez still went to war, as part of the auxiliary support system for transportation.

The men were then flown to California and boarded the ship that would send them into combat.

Upon arriving in Vietnam, Sanchez fell in love with the country’s beauty, which quickly became paradoxical alongside the crude realities of war.

“I saw such ugly things, such sad experiences,” Sanchez said. “As we entered the port, we could see the airplanes becoming balls of fire. Our ship began to be attacked. I was filled with fear and anxiety.”

Sanchez was part of the 512 Transportation Company, 54th Battalion VN, which served as a transport support system in combat. The unit became like a close-knit adopted family for him.

Sanchez’s schedule was grueling. He would sleep during the day and work at night. His fascination with the local Vietnamese people and the beautiful landscape made his experience bearable, he said. It was nothing like he had ever seen before.

The convoy he was traveling in was attacked by explosions and gunfire. He lost three to seven people from his unit.

“I started marking the days left for me to leave,” Sanchez said. “People think that being part of the transportation unit was easier, but it was not. I many times had to ride behind everyone else and risk my life.”

Shortly after the bloody attack, he received the news he had been waiting for; he would be returning to Puerto Rico. He left the morning of Sept. 24, 1967, with nothing more than the clothes on his back, a toothbrush and a small bag.

Five days later, he was back in his warm country of Puerto Rico. No one was there to welcome the veterans.

Sanchez said he wasn’t left with many positive memories of the war, but that he does not regret the experience.

“The Vietnam War is the most important thing that has happened to me and something I will never be able to forget,” Sanchez said. “The war was not easy, and it left nothing positive but sickness in everyone.”

Mr. Sanchez was interviewed on Dec. 31, 2009 in Puerto Rico, by Manuel G. Aviles-Santiago.