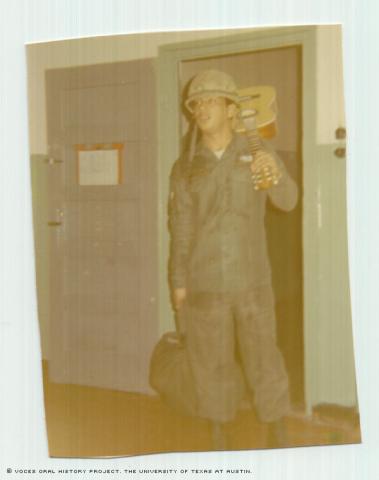 For Juan Guajardo, life before and after Vietnam was just as traumatic as the five months he spent overseas. From growing up surrounded by gang fights to struggling with post-traumatic stress disorder, the decorated U.S. Army veteran, who would become a leader of the Brown Berets and a civil rights advocate in San Antonio, continuously fought for his health and happiness at home.

Guajardo was born in San Antonio on Dec. 18, 1947. He grew up with his mother, Aurora Rodriguez, five brothers, one sister and his stepfather, Refugio Rodriguez; his biological father was shot and killed in a bar incident in October 1947, just two months before Guajardo was born.

Guajardo said he grew up in a family where everybody worked. His mother worked at a pecan factory, while his stepfather drove trucks for Pearl Brewery. As a youth, Guajardo held different jobs, such as selling newspapers and shining shoes.

Guajardo grew up in a San Antonio neighborhood known as the Ghost Town, named after a notorious gang. He often witnessed violence on the streets and in his own house.

"We all thought it was normal," Guajardo said. "Until we grew up, and we said 'Hey man, this wasn't right.' "

Adding to the hardships that Guajardo faced as a child, he started abusing chemical substances when he was 13.

"First it was gasoline, and then it was lighter fluid," Guajardo said. "Then it just escalated."

He said that he had continued to use drugs throughout his tour in South Vietnam and after he returned home.

All in all, Guajardo said that he learned the ins and outs of survival as he grew up in that area, and the lessons learned in the street served him well later in the military.

When he was drafted in August 1968, Guajardo remembered, many other young men in his neighborhood were drafted, too.

"I felt the longer I stayed out of the streets, the better I was," Guajardo recalled.

Although his activity in the Chicano civil rights movement reached its peak after Vietnam, Guajardo's commitment to improving the lives of Mexican-Americans began before his service. He joined Volunteers in Service to America (VISTA) and set out to organize people in San Antonio's impoverished barrios and educate them about their rights as citizens. Guajardo said that he could have received a draft deferment because of his involvement in this federal organization, but he refused.

"In our culture and upbringing, if you were called to serve, you went to serve," Guajardo said. "There's no two ways about it."

After his basic infantry training at Fort Bliss in El Paso, Texas, Guajardo received Advanced Infantry Training at Fort Ord, Calif. There, he was also trained in mortars, which he recalled never actually using in Vietnam. After a brief break in San Antonio for Christmas, Guajardo was sent to Vietnam in January 1969.

He traveled to South Vietnam with three childhood friends from the barrio, but they were assigned to the 101st Airborne Division.

The first thing he remembered about Vietnam after stepping off the 18-hour flight into the city of Bien Hoa was the smell of burning feces and what felt like 120-degree weather. He was quickly trucked from there to Long Bien and then to the headquarters of the 9th Infantry Division at Dong Tam and trained there for another couple of weeks.

Although he was assigned to the 9th Infantry, Guajardo was sent to the 86th Combat Engineer Battalion at Camp Viking, in South Vietnam. He served as security there, and participated in search and destroy missions with one of the units from the 9th. He recalled carrying a mine detector, even though he was not trained in its operation.

Although he didn't have direct contact with the enemy, Guajardo remembered pulling guard duty and seeing firefights in the jungle; jets swooping in, dropping bombs and giant explosions. At times, the fighting was close enough that one could hear the automatic weapons discharging, he recalled.

"You start thinking, and you start praying," Guajardo said. "God, please don't send me out there."

Guajardo said his unit was assigned to build a fire base, which required leveling the land and stacking sand bags to make bunkers. Guajardo said it was hard work, and he basically learned by example.

He then was sent to the 4th Battalion, 47th Infantry Regiment, 9th Infantry Division.

Although he never had to fight, Guajardo and his men frequently encountered booby traps; he recalled losing about two men a day to them.

On May 14, 1969, he and his men were walking through a clearing in the jungle and were told to walk back and retrieve supplies from a helicopter. Guajardo was walking for the third time on the same path when he stepped on a land mine. Shrapnel penetrated his legs, back, head and arms. His right leg was broken in three places and bones were protruding out of his skin. He said that he remained conscious the entire time and was given two shots of morphine, water and a cigarette.

"The first thing I remember was calling out for my mom," Guajardo recalled.

Guajardo said that he must have either missed the mine the first two times he walked on that path, or the enemy planted it there between trips back and forth from the helicopter. Guajardo said that soldiers were warned not to walk on the same path twice just for this reason.

He called it his "million-dollar wound," meaning that this was the wound that got him his ticket out of Vietnam and back home. At first, he didn't know if he was going to make it, but he just prayed, relying on his faith in God and his Catholic upbringing. He was evacuated to two different hospitals and then eventually to the Tan Son Nhut Air Base Hospital, near Saigon, which is now called Ho Chi Minh City. . From there, Guajardo was flown to the hospital at Camp Drake in Tokyo, where he spent 37 days.

He then returned to the United States, going to the Beach Pavilion unit at the hospital at Fort Sam Houston in San Antonio.

He served his last eight months of service at Heilbraun, West Germany.

Guajardo's highest rank was Specialist 4. Among the medals he was awarded were the Purple Heart; a Vietnam Service Medal; a Vietnam Campaign Medal; a Vietnam Medal of Gallantry Unit Citation with Palm, and the Combat Infantry Badge.

"I'm proud to have served, and I'm very proud of all the others that served," Guajardo said. "It was a learning experience, a growing up experience. It was part of history that all of us will share together, and something that our great-grandchildren will be able to see."

Despite his previous experience with drugs and alcohol and the readily available marijuana and beer in Vietnam, Guajardo said that when he returned home, it got really bad. He had trouble sleeping, he said, so he often drank until he passed out. His drinking and drug addiction escalated, but he didn't know why.

It was when he finally met with someone from the Department of Veterans Affairs that he discovered he had post-traumatic stress disorder. The VA provided therapy and counseling, and even helped with employment opportunities.

"I can't have too much free time," Guajardo admitted. "It's when the demons start coming out."

Guajardo's avid involvement in the Chicano movement helped to occupy his time. He started becoming more involved in the Chicano civil rights movement after he returned from Vietnam. He started talking with his brother, brother-in-law and friends in the barrios of San Antonio, and he eventually organized a chapter of the Brown Berets. Guajardo was elected the prime minister of the San Antonio Brown Berets and became the leader for their cause.

"We started helping out in the community and spreading the word of carnalismo (brotherhood), " Guajardo said. " Trying in some way to stop the gang fights and the killing."

"The Brown Berets was something that came out of the barrios, and we were working the barrios," Guajardo said.

Many people feared the movement, believing it to be a gang. Its members were often attacked by police. Guajardo recalled one year when a young Chicano was shot and killed because he happened to be near a burglary. However, aside from advocating for rights and holding marches against police brutality, the movement couldn't really do much about the situation.

"I knew we couldn't change it, but I thought we could bring attention to it," Guajardo said. "And maybe, maybe someday legislation might be able to change all of that."

Guajardo was later featured in a chapter about the Brown Berets in David Montejano's book "Quixote's Soldiers," a history of the Chicano movement from 1966-1981. The cover of the book shows a photograph of a march on the Texas Capitol in Austin in which Guajardo participated.

"We raised the Mexican flag at the state capitol," Guajardo said. "That's never been done before."

Guajardo said that he participated in the Brown Berets for four years. He met his wife, Victoria, at a political rally during that time, and they eventually had one daughter, Marisa. His wife also had two children, Robert and Corina, from a previous marriage. He recalled that his family put up with a lot, given his struggles with PTSD and substance abuse.

"They managed to pull through," Guajardo said. "They're survivors."

It was his own drug abuse that inspired Guajardo to obtain a license in substance counseling. He said that his high school counselors had told Mexican students they were good with their hands, and there was no need for them to pursue a higher education. So, although college never seemed like an option to an adolescent Guajardo, he started attending San Antonio Community College in 2000 to earn an associate's degree.

He also worked as an intern with the American Medical Association as a substance abuse counselor.

Aside from daily pain medication for his war wounds, Guajardo was clean and sober for 21 years at the time of his interview

Mr. Guajardo was interviewed by Anna Kavich in Castroville, Texas, on Nov. 6, 2010.