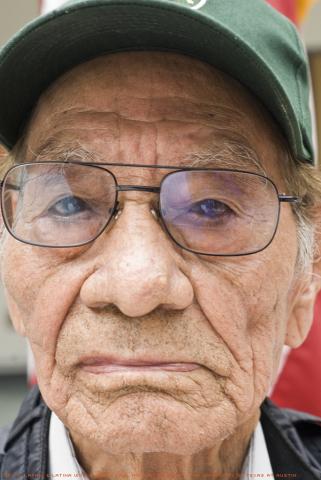 Though he was never stationed on the battle front, the early portions of Juan Baggio’s life prepared him to serve his country on the home front during World War II.

“My dad died three months before I was born and my mom died when I was 12 years old, so [my childhood] wasn’t too good,” said Baggio, who grew up in hard economic times with his single mother scrambling to support him; his older brother, Bob; and two half-siblings.

“We had to chop wood and help people bring water inside because it was … pretty rough growing up,” said Baggio of life in Beeville, Texas. “School was nice. … I just couldn’t [go] because my mother couldn’t afford to keep me in my school.”

Struggling after the 1936 death of his mother, Maria Guadalupe Ramos, not to mention trying to stay afloat during the Great Depression, Baggio and Bob moved to Corpus Christi, Texas, where Baggio did all kinds of work, including picking cotton, washing cars and working in a restaurant, while his brother labored at a shoe shop, shining shoes.

“I washed cars for a dollar and a quarter for six days a week. It was rough, hard to make a living. It was bad but we survived,” said Baggio with a chuckle during his interview.

So when the draft letter came in from the Army after the United States entered WWII, Baggio leapt at the opportunity for a better life.

“I really wanted to go. I was happy about that. I did not mind serving for my country,” he said.

On Jan. 20, 1943, Baggio joined the Army and traveled to Salt Lake City, Utah, for training. He recalled his first train ride out of his hometown being “a long, long drive that took maybe two to three days,” but otherwise, liking it and feeling “really good” about being away from home, despite the weather being unfamiliarly cold.

Daily life in Basic “was rough,” Baggio said. “You had to do a lot of things to be prepared for war … but I was ready for it, because growing up, I had to learn how to be on my own. I lived in a rough neighborhood. All the work I had to do, I was ready for it. I didn’t mind it at all.”

Upon completion of his basic training, Baggio was assigned to the 1159th Guard Squadron Army Air Corps training base in Great Bend, Kan. The Army established 15 airfields in Kansas because of its beautiful, year-round flying conditions, with the loosely populated land making it an ideal location for gunnery, bombing and training ranges.

Baggio’s service to his country wasn’t highlighted by fierce battles against the Germans or fighting the Japanese on the Pacific Front. Instead, he served quietly behind the scenes as a guard patrolman, while his fellow countrymen at the base were equipped with the skills and training necessary to defeat the Axis powers overseas.

Explaining that the 1159th Guard Squadron was, in reality, more “like security,” Baggio summarized his duties as working at the guardhouse and patrolling the base.

“When I was on duty, I would drive the Provost Marshal, who is like the Chief of Police, to town,” he said.

“I remember they had a truck-drivers strike in Chicago, and we went over there to help out the drivers.”

When Baggio left the military, he was officially listed as a private first class; however, he says he was up for promotion to Corporal and never received the promotion because of the kindness he extended one cold winter day.

“I used to take care of domestic prisoners, such as people who went AWOL … [and] was supposed to patrol the base with the prisoners and pick up trash, but there was too much snow and it was cold so I put them in a boiler room. A sergeant who was passing by saw me, so I didn’t get the other stripe. It was not a big deal.”

After Baggio returned to his hometown after the war, he took advantage of the G.I. Bill of Rights to finish the educational equivalent of the 8th grade, while simultaneously trying to balance a source of income.

“I [worked] all day and came home and went to school from 5-10 pm,” Baggio said. “I had my own company called JRB (Juan Ramon Baggio) … [and] worked all over the city, doing carpentry, painting. It was all about construction and carpentry and painting, everything that goes into remodeling a house.”

Overcoming odds that placed many people in poverty, Baggio is emblematic of the type of prosperity that inspires many immigrants to succeed in America. His ability to maintain an even keel and dogged work ethic allowed him to become a “self-made man,” even establishing his own construction company.

When asked if he has any advice for the country’s youth, Baggio urged them to take school seriously.

“[Formal education] is something I wish I had. I never got a chance to get it. That would be my main advice to them,” Baggio said.

Mr. Baggio was interviewed in Beeville, Texas on March 21, 2009, by Adolfo Dominguez.