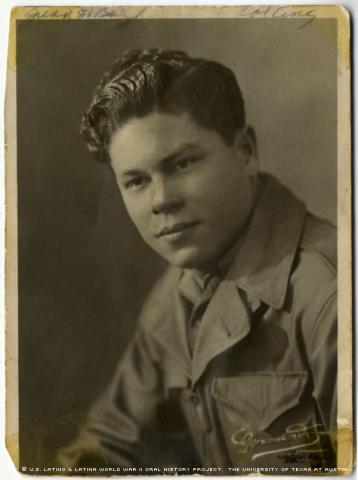 Juan Antonio Báez remembers sitting with two fellow soldiers on a hillside, singing their favorite Puerto Rican songs. World War II had taken them far from their homeland, a nation, for Báez, of poverty and hardship.

“Terrible,” said Báez, describing the Puerto Rico of his youth. “I didn’t have anything.”

But the war, in which Báez volunteered to fight, changed that. Like many veterans, the former soldier can no longer recall a lot of his combat experiences with great detail, but the influence of combat colors his memories of the past, both on and off the battlefield.

Báez was born in Ciales, Puerto Rico, on March 7, 1924. His father, a laborer named Juan Báez, and his mother, Eusebia Ramos Baez, a homemaker, worked to support their four children. The family struggled economically, and Báez fought to stay afloat in high school.

“What I learned wouldn’t stay in my head,” he said.

Báez’s thoughts soon turned to the military. He tried to join at the age of 16 but was too young to enlist. He was ultimately inducted into the Army on June 22, 1942, at age 18.

“They didn’t like it,” said Báez of his parents’ reaction to his enlistment. “They thought they were going to kill me.”

Báez attended basic training and later joined Puerto Rico’s 65 Infantry Regiment. The war took him to Germany and other parts of Central Europe.

Báez describes the battles that took many of his friends’ lives as harrowing.

“It was incredible, what I saw,” he said. “The death. Those who were killed. Those who killed.”

Yet he struggles to conjure specific memories of his time at war.

Báez does, however, credit WWII, and what he witnessed while overseas, with having palpably transformed his life.

The war ended while Báez was stationed in France, so he returned to Puerto Rico, where he was discharged at Fort Buchanan on Nov. 23, 1945, at the rank of Private First Class.

Báez stayed in Puerto Rico for two years before reenlisting in the Army. The war, he says, had changed Latinos’ place in America for the better, and he yearned to continue serving his country.

“We were able to know that we were also soldiers,” he said.

Báez’s continued service took him to Pánama, where he married in 1950 Susana Barría, who was born in Santiago de Veragua, Pánama. The couple, still together at the time of Báez’s interview, has four children.

Raising a family, Báez says, helped him prove he was a capable person. After his work with the Army, with which he was involved for 24 years, Sergeant Báez worked as, among other occupations, a Pentecostal minister for 25 years.

Ever since suffering a stroke, Báez has lived at the Ambrosio Guillen Texas State Veterans Home in El Paso, Texas. His thoughts largely center on his family. His three daughters, who all live in El Paso, are good to him, he says, and provide a source of pleasure in his life.

But he reserves his deepest sentiments for his wife, Susana, who’s five years his junior.

“She’s helped me my whole life,” Báez said. “She’s been my faithful companion all the time. She’s young; I’m old, and [yet] she continues to love me.”