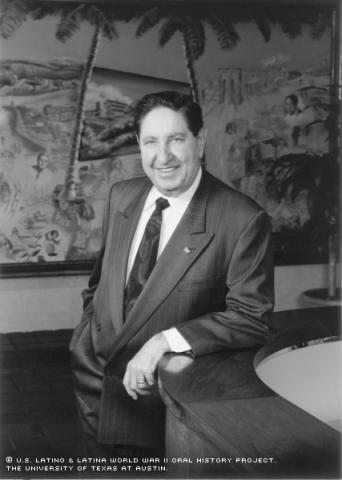 Heading toward combat in the decisive Battle of the Bulge, a brush with death came early for Joseph Unanue. On his first day in the European Theater, his sergeant lay dead and, as the next in command, Unanue would have to save his men from the same fate.

"They wanted me to take over, but I didn't want to. I was just a PFC," he said, referring to his Private First Class rank. Barely 19, he declined to fill the sergeant's rank, feeling ill-prepared to justify the promotion. But he still pulled his men to safety amid intense German shelling, a heroic act earning him the Bronze Star.

Eluding enemy gunfire was a far cry from life back home in Bogota, N.J. The second of four boys, Unanue grew up packing olives for Goya Foods, the food-packing company his father, Prudencio Unanue, owned.

His father and mother, Carolina Casal, both hail from Spain, but met and married in Puerto Rico. In his bachelor days, his father made frequent trips to the United States to study English and business. After marrying, he settled in Brooklyn, where he worked as a broker for Spain-based companies.

In that role, Prudencio would buy inventory from Spanish firms and sell the merchandise across New York. The job afforded the family a comfortable lifestyle. But the Spanish Civil War in 1936 crippled the European nation's economy, and by extension, the family business.

"We went from a period of not having much money to a period of having a little less." Unanue said.

But his father persevered, founding a food distribution company, Manhattan-based Goya Foods, before the year ended. The company has since grown into a multimillion-dollar enterprise based in Secaucus, N.J. But its success was hard-fought, as Anglo-owned companies initially wouldn’t buy goods from a Latino-owned operation.

All of the Unanue sons have worked at Goya Foods since childhood, including Unanue, whose job while still a boy involved bottling olives. His father paid him a dollar a day for his services, helping defray transportation costs to reach the plant.

"You had to catch a train to Weehawken; then a ferry to Courtland Street, New York," said Unanue, waxing nostalgic about the hustle and bustle of urban life he witnessed en route to his first job.

When Unanue graduated from St. Cecilia's in June of 1943, World War II was in full stride; he was drafted the next month.

"I was on vacation, and when I got home, the [draft notice] was waiting for me," Unanue said.

After basic training at Camp Roberts, Calif., Unanue was chosen for an Army Specialized Training Program (ASTP) designed for enlistees with high IQs. He was sent to the College of Puget Sound in Tacoma, Wash., to study foreign languages. However, in March, after only three months in the program, he was needed on the battlefield.

He trained for armored infantry and went to the European Theater as a gunner in Company A of the 63d Armored Infantry Battalion, 11th Armored Division. His company landed in France in December of 1944, just before the Battle of the Bulge.

"We had to travel three days in the cold. Some claim it was one of the coldest winters in Europe ever. We joined General [George S.] Patton's 3d Army at the Battle of the Bulge," Unanue said. "We lost half our company in the first 10 days!"

Unanue was fortunate. The worst injury he sustained came after the war while stationed as a guard in Germany, when he was bucked off a horse and dislocated his arm. After treatment, he was sent home.

"My mother got a letter back from President Eisenhower saying I was all right," Unanue said. The letter is a cherished keepsake among his memorabilia.

After returning home in February of 1946, he enrolled in Catholic University of America in Washington, D.C., under the GI Bill, earning a degree in mechanical engineering. Hesitant to join the family business, he looked for work after graduation, but passed on his first job offer.

"I thought I should be making more money than they offered," Unanue said. "So, I went to work for my father for half the price."

In the next 25 years, he would learn every facet of the food industry, from purchasing, production and distribution to credit, personnel and payroll. In 1976, he became president of Goya Foods, now the largest producer of Latino foods in the U.S.

Unanue transformed the family business he once resisted joining into a multimillion-dollar concern, which distributes nearly 1,000 fine food products. From his humble beginnings as an olive-can filler, he now oversees the operation across the contiguous U.S. The company is in the throes of adding a Mexican-food line to the mainstay Caribbean products now offered.

Unanue married Carmen Ana Casal in 1956 and has six children and 16 grandchildren. Like his father, he persevered. And he urges today's youth to do the same.

"It's easy to make excuses," Unanue said. "Work hard and get an education. Don't give up."