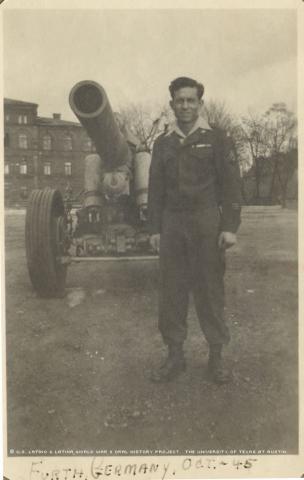 Jose Rosales’ family may not be from this country, but Rosales has always been an American.

Growing up in Campbellton, Texas, nearly an hour away from San Antonio, Texas, Rosales was one of eight children in his family.

“Sometimes it was good, sometimes bad, and we struggle[d],” he said. “My sisters worked at the restaurants. Some of them graduated school, some didn’t; I didn’t even earn my high school diploma. I got it when I got discharged from service in Arkansas.”

Rosales left school to help his father after completing the eighth grade. According to the Southwest Educational Development Laboratory Web site, this wasn’t uncommon at the time, as only one-third of the population in the 1930s graduated high school.

“I missed some school taking care of my younger sister,” Rosales said. “I was a drop-out. It was a rough life, that’s all I can say.”

He smiles and takes off his hat as he reflects on his family.

“When I left for the Army, I didn’t see them for three years,” he said.

In Campbellton, “There was one school, and it was grammar, it wasn’t high school. Eighth grade – that’s as far as I went,” Rosales said.

While he grew up speaking both Spanish and English, his parents had a hard time adopting a new language. His father couldn’t speak English, “but he always tried,” Rosales said. “My dad had a hard time. My parents were illiterate so they couldn’t help me with my homework.”

Rosales enjoyed school, for the most part.

“I was the oldest one in class, so I didn’t enjoy that,” he said, noting that it affected his self-esteem. “I felt better when I was in the Army and saw other guys. I met other people from all walks of life and I got along fine. … I almost stayed in the service.”

After the eighth grade, Rosales started working in order to help his family. “I did field work, then [worked] at a gas company getting ready for the war. I was just a welder’s helper.”

That’s where Rosales was when he first heard about World War II.

“I was pumping gas, and [local World War I veteran Morgan Burson] said, ‘Joe, we’re in a war.’ And I looked around and he said, ‘They just finished bombing Pearl Harbor.’ And I didn’t know what Pearl Harbor was; I’m not going to school.

Like many Latinos at the time, Rosales was drafted into the Army at age 18. After getting inducted March 19, 1943, he began basic training at Texas’ Fort Hood. He was later sent as part of a support unit to Europe, where he worked as a motor-vehicle parts clerk with the 836th Ordnance Depot Company in France, Belgium, Germany and Czechoslovakia. Rosales wasn’t in direct combat early on; while in southern France working on tanks, he even managed to find some time to enjoy himself.

“We were having a ball there,” he said with a chuckle, adding, “We knew what vin rouge was.”

Rosales wasn’t having fun toward the end of the war, however, especially when he had to spend two weeks in the cold snow in Belgium. He ended up catching pneumonia and getting taken to a hospital.

“I don’t remember being taken off the ambulance, and one morning, I woke up; I start waking up – I don’t know if they’re giving me medication or not, I had pneumonia. I heard hard shoes, somebody was walking, and I opened my eye and I thought, ‘Oh my gosh! I got captured. I don’t remember being captured.’ And I didn’t want to look, see what happened.

Technician Fifth Grade Rosales was discharged from the Army on April 3, 1946. For his service, he was awarded a WWII Victory Ribbon, Good Conduct Medal, American Theater Ribbon and EAME Theater Ribbon.

After returning home to Texas, he went back to his pre-war life. Throughout his time at war, he says he never felt the prejudice many Latinos recall.

“I didn’t ever meet discrimination from anything, ever. I got along fine,” Rosales said.

He said the same of his hometown:

Mr. Rosales was interviewed in San Antonio, Texas, on August 4, 2007, by Markel Rojas.