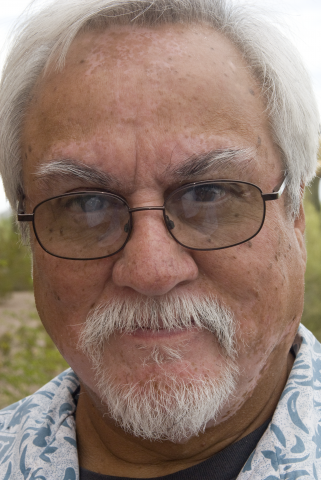 Louis Villalobos Jr., a senior in high school, weighed his options. He didn't have the money to go to college. He could wait to be drafted to serve in the Vietnam War, or he could enlist and hope to be assigned somewhere else, where he could learn a trade.

Army recruiters told him that if he enlisted, there was a 90 percent chance he'd be sent to Germany. He signed up on March 11, 1966, but first finished high school before reporting for duty that October. He did basic training at Fort Bliss in El Paso, Texas, and then received armored training at Fort Knox, Kentucky.

When it came time for the new soldiers to get their assignments, Villalobos got a shock: Out of about 200 men, only about five were sent to Germany. The sergeant told them, "The rest of you are going to Vietnam, Republic of. But don't worry; you have two weeks off first."

Villalobos did not know what to expect. All he knew was that “it was hot, it was a jungle, and they were wearing black pajamas and straw hats.” He did not anticipate the rain, the cold, the bugs and the snakes, but he learned to cope with them.

Leaving the United States for Vietnam, he experienced “emotional, scary, and exciting feelings, all at the same time,” Villalobos recalled.

Villalobos was born Nov. 15, 1947, in Mesa, Arizona. He grew up traveling between Mexico and the U.S. because he had family on both sides of the border. His father, Luis Villalobos, a native of Torreon, Coahuila, Mexico, had come to the U.S. as a “bracero,” a migrant laborer, during World War II. The elder Villalobos later became a baker and owned a bakery in the U.S, making both traditional Mexican and French pastries.

His mother, Manuela Sotelo Villalobos, was a native of Glendale, Arizona, who worked in the fields early on and later worked for an agricultural company. The couple had eight sons and two daughters. They divorced in the mid-1970s.

The family lived in Tolleson, Arizona, west of Phoenix, where Villalobos went to high school. He recalled hearing about the war from returning soldiers but didn't give it much thought at the time.

During the flight to Saigon, he thought a lot about what Vietnam was going to be like. He did not worry about “not making it or dying,” though he knew he might have to deal with injuries, ambushes, deaths and the overall hardships that come with war.

Because of his loved ones back home, “I made up my mind not to screw up, follow orders, and do what I had to do.”

In Vietnam, Villalobos was assigned to Headquarters Company 4th Battalion, 23rd Infantry Brigade, 25th Infantry Division, in Cu Chi, near Saigon. His job was ground surveillance -- listening with headphones to devices placed out in the field for any sounds that indicated the presence of the enemy or other dangers.

In June 1967, Villalobos was injured when his unit was ambushed in the Ho Bo Woods northwest of Saigon. He had shrapnel wounds in his legs and back and was treated at a field hospital and then at Camp Zama in Japan for a couple of months.

His worst experience was the death of his close friend, Raymond Perez from Houston, who was in the same unit. Perez was getting ready to come home on Nov. 24, 1967, when an artillery round landed near his reconnaissance platoon. When he was told that Perez had been killed, Villalobos said he began to “shut out everything.”

"After that, I just wanted to get out," he said.

He left Vietnam in 1968 and was discharged March 10, 1969, at Fort Rucker, Alabama. Back in Phoenix, he took a cab to a local store and bought a case of beer and then went to his parents’ house. His mother cried because her son had made it back safely.

He said he felt a sense of peace and “quietness.” The homecoming was “such a simple moment” and “a beautiful thing.”

He and his wife, Amanda, whom he married on Feb. 12, 1971, live in Glendale, Arizona at the time of this interview. They have four daughters: Karla, Angela, Raquel and Maria. After the war, Villalobos worked for the Postal Service from 1971 to 2009, when he retired.

He said he has some disabilities from the war and is getting help from the Department of Veterans Affairs. "It's taken some time," he said. He recalled a visit to the Vietnam Memorial in Washington, D.C. "That was tremendous."

Mr. Villalobos was interviewed by Liliana Rodriguez in Tempe, Arizona, on Aug. 16, 2010.*