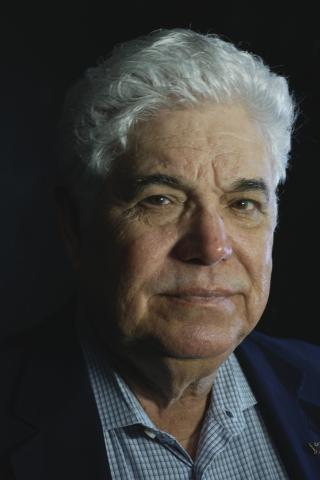 As a student at the community college in his hometown of Laredo on the Texas-Mexico border, Jorge Haynes Jr. was looking for direction in his life.

“I majored in flag football and in going to Nuevo Laredo to drink beer after 11 o’clock in the morning, so I didn’t do so well,” he said.

His father was pressuring him to go to college, but Haynes wasn’t quite ready. Instead, in January 1967, he enlisted in the Air Force.

It was a turning point in his life, an experience that would set him on a path to finishing college and embarking on a successful career in government and the private sector in Texas, California, Florida and Washington, D.C. Along the way, Haynes would work for some of the most prominent figures in Texas politics, including Lt. Gov. Bill Hobby and Comptroller Bob Bullock, who in his day was regarded as one of the most powerful politicians in the state.

Signing up for the Air Force in 1967 was not a hard decision, Haynes said. In Laredo, with its large Hispanic population, "almost everybody went into the military.”

His father, Jorge Haynes Sr., had served in the Army Air Corps during World War II and was a mechanic at the Laredo Air Force Base, which was across the street from their home. His mother, Olga Gutierrez Haynes, was a homemaker, trying to keep her four sons and one daughter in line.

Once in the military, the younger Haynes was assigned to Lackland Air Force Base in San Antonio, where he was asked to fill out a “dream sheet” about what he wanted to do.

“I wanted to work on navigation systems. I had a love for airplanes,” Haynes said.

He got his wish and spent a year in electronics school at the Technical Training Center at Keesler Air Force Base in Mississippi, and then was sent to Beale Air Force Base in California to work on supersonic Lockheed SR-71 reconnaissance planes. The high-tech planes could reach 80,000 feet in altitude and were equipped with sophisticated cameras, radar and navigation systems.

"It was almost surreal," Haynes said of working on such an advanced plane. "Today people will tell you that I'm kind of a computer geek, that I'm a tech guy. It all goes back to the SR-71. It all goes back to Keesler Technical Training Center and how they kind of made me feel comfortable about electronics."

During the Vietnam War, Haynes went on several temporary assignments to Kadena Air Base on Okinawa as part of the 9th Strategic Reconnaissance Wing, where he worked on the advanced navigation system.

He was part of a crew that worked 12-hour shifts, helping to ensure that everything was right before the plane took off, monitoring it while it was in the air, and then participating in a debriefing session after it landed.

Haynes loved working on the SR-71, but he was frustrated when higher-ups pulled rank and ordered him to do something their way or else, even if he believed his way might be better.

“If I don't have an education, I'm always going to have someone who is probably not as intelligent as me telling me what to do,” he said.

So after his 1971 discharge, Haynes, using the GI Bill, enrolled at California State University, Sacramento, where he earned a bachelor’s degree in government. "I made very good grades in college. I was very lucky. I don't think I ever made a B."

At Sac State, he had a brilliant professor and mentor, Joe Serna, who inspired him to volunteer for the United Farm Workers. Haynes said he helped UFW co-founders Cesar Chavez and Dolores Huerta lobby legislators to improve conditions for migrant farm workers. He said Huerta remains a “close, close friend.”

Over the next several years, Haynes held various state government jobs and then became a lobbyist for the California State Employees Association.

“And I found that when you ask, you get a lot further than when you demand," he said.

Although he was a Democrat, he learned to work with people from both parties. Haynes said with lobbying, "People come together in the center. And I'm afraid what's happened right now in the body politic is we've come apart to where there almost is no center."

Haynes returned to Texas when then-Treasurer Ann Richards asked him to meet with Hobby, who hired him as his speechwriter. Although Haynes had never written speeches before, he had a knack for it.

"My family will tell you that I'm pretty good at BS, so they thought it was pretty easy,” he said.

Haynes said he learned a lot in his three years working for Hobby.

"One of the things that he treasured is consensus, always trying to build consensus,” Haynes said. “And the other thing is when you use your power, you lose it. It's like a battery."

After a brief detour to work for the speaker of the Florida Legislature, Haynes returned to Texas to work as a deputy for Bullock.

“He was the best tax collector that Texas ever had,” Haynes said. "He was a diamond in the rough, but he put one thing above everything else: He was a Texan, and he loved this state and he wanted to do the best for this state that he could."

In 2001, Haynes returned to California to serve as senior director of external relations for Chancellor Charles Reed at the California State University system, a job he held for 13 years before retiring.

"We worked with all the underserved communities to try to get parents, communities, various organizations, churches to get to understand how easy it was for a parent to be a part of the support team, even though the parent may not have gone to college," Haynes said.

After many years in the political field, Haynes retired in the Austin area in 2014. "I feel at home wherever I live, but I feel most at home in Texas."

At the end of the interview, Haynes asked that people give people in the military the respect they deserve. "When you see a soldier at an airport, at a restaurant, just tip your hat to that person. Because they're doing something that many of us don't want to do."

Haynes was interviewed by Maggie Rivas-Rodriguez in Lakeway, Texas, on July 9, 2015.