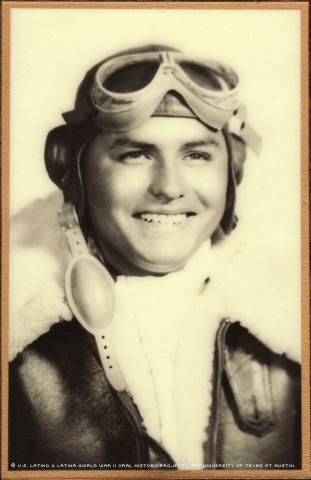 A simple announcement for aviation cadet training at a camp in Washburn Island, Mass., piqued John Fernandez’s interest, so he applied.

He just never expected to make it.

But to the El Paso, Texas, native’s surprise, he did, and was quickly assigned to Army Air Corps pre-flight training at Lafayette College in Easton, Penn. Fernandez successfully completed advanced aviation training and went on to fly dangerous daily missions with the 345th Bomb Group in the South Pacific during World War II.

The oldest of 10 children, he was drafted into the Army at 18 following his graduation from Bowie High School. Before getting shaped by the Army, however, Fernandez learned from his mother, Manuela Ortiz Fernandez, how to stay in line and provide a good example for his younger siblings.

“She really had to make the funds stretch, and the food stretch,” Fernandez said. “I was always doing the right thing because of my mother’s teaching.”

Before they met in El Paso in the 1800s, his parents came to the United States from Mexico – his father from the state of Chihuahua; his mother from the state of Mexico. Although he was born in El Paso, Fernandez began visiting Mexico alone on a regular basis as a child, shopping for groceries for the family in Juarez, directly across the border from El Paso.

Fernandez and his siblings were raised in a strict Catholic home, and certain aspects of life and religion were of great importance to his mother. One of those was the reverence of holidays, a lesson Fernandez came to learn the hard way.

“One time I forgot to bring her a flower on Mother’s Day,” Fernandez said. “She didn’t speak to me for a week. Do you think I ever forgot Mother’s Day after that?”

Another aspect of life of great importance to his mother was “loyalty to our country,” wrote Fernandez after his interview, referring to WWII. “She told me I had to go!”

Fernandez exclusively spoke Spanish at home and with his friends, so learning English at a grammar school with mostly Anglo teachers proved difficult.

“They didn’t teach us how to speak English, they just put us in a classroom,” he said. “All of us learned English one way or another, by trial and error.”

After learning English, Fernandez moved on to high school, where he played football and basketball, and participated in the school Reserve Officers’ Training Corps program. He rose to Lieutenant Colonel in the ROTC, and credited this training with easing his transition into the Army.

After getting drafted, Fernandez, who’d never traveled more than a few miles outside of West Texas, was assigned to Fort Devens in Massachusetts.

“I had never experienced cold weather,” he said. “The first day at Fort Devens it was 37 degrees below zero and sleeting.”

After he was accepted into the aviation program, he trained for six months at Lafayette College. His 10 hours of flying time were his first experiences in an airplane.

He completed flight training sequences at locations across the country; at most stops, he says his superiors looked to him to help prepare other soldiers because of his ROTC experience. Then, at advanced flight school, he was one of 50 cadets chosen to fly B-25 bombers on a trial basis. The B-25 bomber was one of the first twin-engine planes used in the military, and employed eight forward-firing machine guns, armor and self-sealing fuel tanks.

“At that time, flying those planes had never been heard of. We were the nucleus, the example of future training,” Fernandez said.

Fernandez went on to fly B-25 bombers with the 345th Bomb Group of the Fifth Air Force. He flew reconnaissance missions, as well as bombed and strafed Japanese airfields and destroyers in the Philippines, Okinawa and New Guinea. He estimates he spent 10 to 12 hours in a plane each day, and that his squadron flew nearly every day during the war. He says his squadron always flew low-level, often traveling less than 50 feet above the ground. The missions were always dangerous, often loosing planes to enemy fire.

Fernandez says he made a special point of flying over both Hiroshima and Nagasaki after they were bombed by the U.S., because he wanted his squadron to see the damage firsthand.

“You didn’t see anything. There was nothing there. It was terrible,” he said. “You didn’t think one bomb could do that much damage.”

Fernandez was on a mission to drop more bombs onto Japanese ships when he was radioed that WWII was over in the Pacific and that the Japanese wanted to surrender. His squadron responded by dropping its bombs harmlessly into the ocean.

“Everyone was jubilant,” he said. “It was fortunate to see the end of the war, and the emissaries coming for peace.”

Fernandez achieved his military accomplishments as the only Mexican American in his squadron. In fact, he says he didn’t know any other pilots of Latino descent.

Fernandez says one of his most memorable moments as a member of the Army Air Corps is flying in formation over President Franklin Roosevelt’s funeral procession at Andrews Air Force Base on April 15, 1945.

At the end of the war, Fernandez’s bomb crew was deactivated and he was discharged as a first lieutenant. He returned home to his wife, Estela Bárcena Fernandez, in August of 1946. Fernandez and Estela went on to raise five children in El Paso, where he continued to serve his country as a member of the U.S. Postal Service, then as a supervisor for U.S. Customs on the Texas-Mexico border. He worked as a customs supervisor for 21 years, while also laboring part time as a loan officer at the Government Employees Credit Union.

Fernandez retired from both Customs and the GECU, and was then elected to the GECU board of directors. He continues to teach catechism and help out at his church in El Paso, taking a keen interest in local youth.

“My advice to the younger generation is to educate themselves,” Fernandez said. “And to go for it and never look back.”

Mr. Fernandez was interviewed in El Paso, Texas, on September 1, 2007, by Robert Rivas.