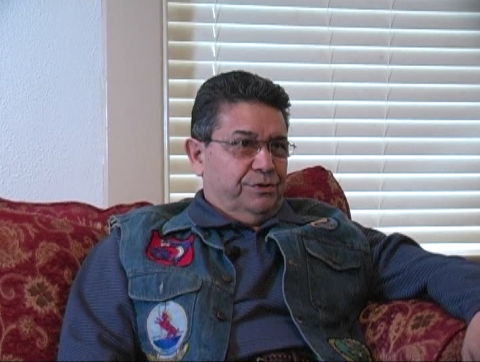 “It’s a neat experience because you get to meet people from all over the United States, and we are working for the common good and a common goal.”

That’s how John Martinez described his service aboard a submarine. But that experience was only one element of the larger personal significance he felt for his service in the U.S. Navy.

Martinez was born Oct. 13, 1943, in Houston, Texas. He grew up near the city’s ship channel and enjoyed watching ships arrive and depart. Sometimes, Navy warships visited and opened their doors to the public, sparking Martinez's interests in travel and Navy service.

In 1963, Martinez enlisted in the Navy. But before he left for basic training, he had to finish some classes at San Jacinto Junior College, where he studied commercial art. So he was assigned to the submarine service that met once a month and on the weekends, a scheduling commitment that did not interfere with school.

He began recruit training at Naval Station Great Lakes, III., where he said he didn't feel any discrimination as a Hispanic because “everybody got treated equally awful.” At first, Martinez found boot camp frightening and uncomfortable, but he soon grew accustomed to the rigorous workouts and marching.

“The more you are pushed,” Martinez said, “the more you accomplish and start realizing what the training is about.”

After boot camp, Martinez attended submarine school, where he learned every detail of a submarine. He eventually received hands-on training, and after six months he felt prepared to deal with every situation he might encounter aboard a submarine.

Martinez served aboard the USS Tirante, a diesel-powered submarine from the World War II era. About 100 sailors lived in cramped quarters, working as a team. The submarine was about 110 feet long and 30 feet wide. It cruised 200 to 500 feet below the surface and held torpedoes in forward and aft rooms. The crew was predominantly white, and Martinez was one of only three Hispanics.

As quartermaster, Martinez’s main responsibility was to track the ship’s course. He used a gyroscope, a device that detected the submarine’s movement, and penciled dots on a grid paper to chart its progress.

“The main goal of a submarine is to remain secret,” Martinez said. "You don’t want the satellites or anything to detect who you are or where you are.”

While at sea, the crew practiced anti-submarine warfare with aircraft that hunted them with dummy torpedoes. During a routine exercise with a new torpedo called the “search and destroyer,” the crew had a frightening experience. The dummy torpedo was to target the ship and then harmlessly cruise over it. But the torpedo struck the ship. Martinez feared the submarine was going to sink, but the captain made an emergency rush to the surface and the crew made it out safely.

Despite that experience, Martinez was confident in his crew. “It always amazed me that no matter what happened, we always had somebody there who could fix it,” Martinez said.

Unlike servicemen in ground forces on the front lines, Martinez could communicate with his loved ones. Besides writing letters, he could call home using shortwave radios, where he had to say “over” at the end of each sentence.

Protests over the Vietnam War shifted how Martinez regarded his own military service. When his submarine visited a port, Martinez would change into civilian attire because he worried people might react violently to his Navy uniform.

Martinez was discharged in October 1971 as a Quartmaster E-5. He returned home to Houston but soon realized it had changed. His old friends were no longer as close as they had been. Emotionally and socially, Martinez felt he had to start over. Because of the anti-war resentment civilians had shown veterans for years, it wasn’t until the 1980s that Martinez participated in an official welcome-home parade for Vietnam veterans in Houston.

His mother, Lorine, made a special vest for him to wear in the parade; it displayed patches representing the three warships on which he had served. On the day of the parade, Gen. William Westmoreland, former commander of U.S. forces in Vietnam, led Vietnam veterans down to Hermann Park, where a miniature war memorial wall stood.

Despite the unrest during and after the Vietnam War, Martinez proudly embraces his military service, particularly the journey he began at boot camp.

“At first you don’t appreciate it,” Martinez said, “but in the end, you feel very, very proud that you are able to accomplish what you thought was impossible when you first arrived.”

Martinez worked as a graphic artist at Bonner + Moore, and then was the owner and graphic designer of Diseños. He married Norma Lee Willman on May 28, 1985, and they had two children, Ryan and Celeste.