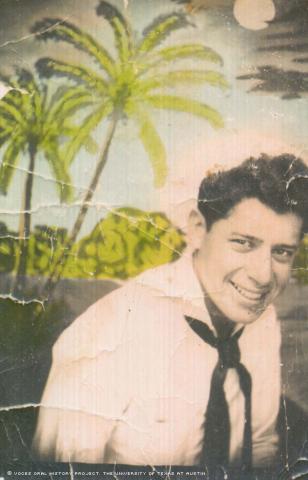 John Chavez grew up as an orphan, moving from house to house, and later survived the bloodiest Pacific battle of World War II. After the war, he settled in Tucson, Ariz. So when he looked back, he realized: "My life turned out good."

Chavez was born on June 7, 1927, in El Paso, Texas, to Margarita Chavez Rendon and Juan Rendon. When he was one month old, his family moved to Tucson. His mother passed away when he was six years old, and he and his brother and three sisters were sent to the Arizona Children's Home orphanage. He recalled being tied to a tree and beaten one time when he tried to escape.

When Chavez was nine, his maternal grandmother, Anjelita Ayala Chavez, adopted them. She had initially declined to take the children because she thought she was too old. But she changed her mind because she believed that they were being abused.

"That time was hard. It was difficult for my grandmother because, after we got out of the orphanage, we never spoke anything but English," Chavez said. "My grandmother didn't know English, so it was pretty difficult for her to communicate with us."

Chavez said his grandmother taught him Spanish, the language they spoke in her home. They spoke English everywhere else.

After his grandmother died when Chavez was 13, he lived with his uncle and aunt, Everett and Carmen Chavez. He recalled that both his grandmother and his uncle were alcoholics, and it made Chavez determined "never let my kids go through that." Neither Chavez nor his wife smoked, and they drank only socially.

Chavez said his childhood was also difficult because of the Great Depression.

"I didn't have time to play games or have fun while I was a child," Chavez recalled. "I used to rush home and go to work." He sold newspapers and shined shoes.

"In our days, kids wouldn't go to school past junior high because you had to work and help the family," he said. Chavez attended Safford Junior High School in Tucson. When Chavez was 14 years old, he heard an announcement at the Fox Theater in Tucson: the Japanese had attacked Pearl Harbor.

"At that time, I didn't even know what Pearl Harbor was. We were just kids. It didn't sink in -- period -- because I was only about 14 years old," he said. "I never thought I would be going into the war."

Chavez enlisted in the Navy on June 9, 1944, to avoid being drafted. He completed his basic training in Oceanside, Calif.

"It was pretty difficult because you had to know how to swim really good in the training I took," he recalled.

Chavez was trained in underwater demolition, a unit which, among other duties, disarmed mines so that landing craft could safely navigate onto the shore.

"But it was fun for me, you know. It was very exciting. They would take us out on a submarine. Then we would have to, with our pack, swim," Chavez said, adding that they were told it was 10 miles. "They taught us to survive, blow things up, and kill Japanese."

As a seaman first class, Chavez said it all an exciting experience for a young man.

In April 1945, the Battle of Okinawa was underway. He said he and some other younger sailors were not scared; but older members of the military -- who knew better -- were afraid. They were smarter, he said, than "us dummies." The April-August battle included the largest amphibious landing in the Pacific theater and left the most casualties, including 100,000 Japanese and Okinawan conscripts, 100,000 Okinawan civilians, and 50,000 Allies.

He was assigned to the troop transport ship, the USS Okanagan. When they reached Okinawa, they started setting up communications from the beach to the ship. Then they would head back to the ship and start making smoke around the harbor in an effort to conceal the ships from Japanese planes.

After four to five days, the sailors started picking up casualties from the landing and taking them to Guam because it was the closest hospital.

"Our ship was full of the wounded. We would give them our bunks because we tried to take as many as we could. Then we had to sleep on the deck outside," he said. "It wasn't that bad."

There were no casualties in his own unit. Although he made many friends in the Navy, he did not stay in touch with them.

He did, however, keep in touch with his family, and especially with Reynalda Felix, whom he had met in junior high school. Chavez and Felix became engaged during his deployment.

In June 1945, the Okanogan arrived in San Pedro, south of Los Angeles, bringing back troops. It then sailed to Seattle to pick up German prisoners of war and take them to Virginia via the Panama Canal. Then the Navy sent Chavez back to San Pedro so he could be discharged and go home. "I was so glad when I found out I was coming back, because I was ready to get married and make a home," he said.

The GI Bill allowed Chavez to attend electrician apprentice school at Tucson High School, and he joined the International Brotherhood of Electrical Workers. He recalled only bringing home $16 a week. His wife was working as a cashier at Food Giant, a grocery store. "She was making more money than me," Chavez said. "So it was hard trying to survive after the service. But we made it."

They lived for two years at the Mission Manor housing tract, a government housing project.

Although Chavez said he never experienced discrimination in his childhood or in the military, he saw it where he worked.

"There were people who thought that the Mexican people should go back where they came from," he said. "But hell -- this is where we came from too."

They had two children, John Chavez Jr. and Frances Moreno. His son also served in the military during the Vietnam War.

His son was just six months shy of graduation from the University of Arizona when he was drafted.

He recalled having taken his son to get his physical.

"They didn't let him come home -- the military took him straight from there to Seattle," he said, adding that he had gone home alone to face his wife with the news

"To us that is one of the saddest days," Chavez remembered.

The military kept the younger Chavez in Seattle for two years as a legal clerk because of his education. The Chavez family was thankful that he did not actually see combat in Vietnam.

"We were, and are still very close," said Chavez.

At the time of his interview, Chavez and his wife had been married 64 years.

Mr. Chavez was interviewed by Samantha Salazar in Tucson, Arizona, on Aug. 17, 2010.