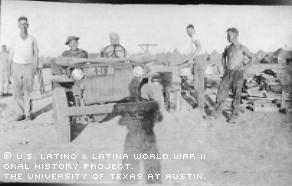 A soldier in the 188th Field Artillery Battalion supporting the 82nd Airborne Division, Uriegas remained optimistic and strong-willed, however, summoning his beliefs as a devout Catholic to pull him through. Once back home, he’d again turn to his faith: this time to help establish a local veterans post to support and nurture Catholic veterans.

Uriegas' two brothers had been drafted earlier in the war, so his hope had been to stay home and care for his mother. In October of 1942, however, he was drafted, and given only a few days to prepare for what would be three years in battle. By the end of his service, he’d rise to the rank of Staff Sergeant, earning five Bronze Battle Stars, a Good Conduct Medal and several other awards. In 2005, Uriegas was presented the Legion of Honor, France's highest honor.

Uriegas was one of seven children, four sons and three daughters, born to Charlie Uriegas and Felipa Moreno Uriegas. He completed basic training exercises across the United States, including stops in Georgia and Oklahoma; then departed for Europe.

Before he could stop to take everything in, Uriegas was in a glider, being dropped over Europe from a large military plane. Military forces used gliders during the war to drop large amounts of troops on the front lines.

"We were hooked on the back of the airplane like a trailer hook to a car," he said about preparing to be dropped between England and France on D-Day.

"I thought and still think the gliders are one of the stupidest things the United States ever came up with to fight a war," he wrote to the Project after his interview.

He recalled the gliders being 38 feet long and made of thin plywood that supported as many as 36 men. Not everyone survived the drop.

After landing, Uriegas, who’d been promoted to Staff Sergeant within two months of basic training, had to think quickly to set up a home base, as he was responsible for sorting supplies of canned food and artillery.

"We spotted parachuted materials in the air and hurried over to unload them," he said. "If the flat was covered in white, we knew it was rations; red was for artillery and so forth."

In Normandy, he scouted the front lines to determine enemy position, strength and strategy. Uriegas and seven other scouts worked their way through rough terrain near the English Channel. He knew they were surrounded when he spotted movement along the horizon in the midnight sky. The scouts retreated; one by one they drew back. Uriegas stood 5'2", making him less conspicuous than his taller comrades.

"I got scared all the time," he said. "I was just thinking I would be next. You see men falling over."

Of the eight scouts, only three made it back.

The scouting mission was one of several frontline activities Uriegas undertook. He was very fortunate, but also turned to God during difficult times for guidance.

"God gave me the courage and strength to go on and fight for the country I love," he said. "It was hard to watch people being killed, but it was shoot or be shot, kill or be killed. I just prayed for myself and others in my battalion to survive."

Uriegas' days were brightened by letters from his bride back home; he’d married Ysidra Avila on Sept. 5, 1942. Unfortunately, the worn letters were difficult to decipher because they were often cut into edited pieces. Military personnel would check all incoming mail for secure information that could leak details to the opposition.

Overwhelmed with exhaustion, Uriegas would sometimes fight three times a day, moving back and forth from the front lines to the background, assisting with whatever tasks he could. From Northern France to the Rhineland, he served the 188th Field Artillery in support of the 82nd Airborne Division in every aspect. German strength began to diminish and a sense of victory spread among the troops. Thousands had died on both sides of the battle, but the Allied Forces outlasted the German attacks and soon won victory in Europe.

The entire time, Uriegas employed his Catholic faith; among other applications, he helped with Sunday Mass services.

After being honorably discharged in November of 1945, he returned home. The war had taken its toll on his emotional well-being.

"During the day, I was very happy, but at night I was sleeping and hit the ground as if I was fighting the war again," he said. "But I would wake up and remember the war was over and go back to bed."

He worked for the University of Texas at Austin for 35 years in a variety of capacities, going from outdoor maintenance to upholsterer and eventually to warehouse supervisor.

Throughout Uriegas' life during the war and back at home, he continued his steadfast commitment to the Catholic Church. After returning and becoming acclimated to life back in the U.S., he and several other veterans dreamed of creating a veterans post for Austin Catholics: They envisioned a place for all Catholic veterans to come together to celebrate a common past, present and future. Merging faith with their military service would help veterans overcome the war’s ramifications.

Catholic War Veterans' primary objective is to make the nation aware of the struggle and needs of veterans, their widows and children. The group stresses the importance of serving family, country and God.

The first Texas post of Catholic War Veterans in Austin was founded at St. Mary's Cathedral in 1948; but it was short-lived, only lasting one year. Uriegas didn't give up, however, and in 1957 he helped found Post 1805 at San Jose Church in South Austin. The post continues to serve the community through fund-raising efforts such as neighborhood bingos. The majority of the organization's profits are given to college students through scholarships for unanticipated costs such as textbooks and living expenses.

Several years after the war, Uriegas was attending Sunday Mass at Saint Ignatius Catholic Church, near San Jose, when he recognized a familiar face. He finally remembered who the priest helping to celebrate the Mass was: Col. Joseph Kmiecik, chaplain for the 7th Army and all its divisions. The Rev. Kmiecik and Uriegas were surprised and grateful to be reunited.

Kmiecik, who belonged to the Order of the Holy Cross, came to Austin as a military chaplain after 30 years of service to staff a parish.

The two renewed their acquaintance and became fast friends. Uriegas welcomed Kmiecik into the community and asked him to serve as the San Jose Catholic War Veterans post chaplain.

Kmiecik held the position until an automobile accident forced him to return to Notre Dame and the Holy Cross Retirement and Convalescent Home. He passed away several years later.

Uriegas also took on politics. He was deeply involved in the Democratic Party and served as a delegate to the party's political conventions at the local and state levels. He also received many plaques in recognition of his avid party support.

"I have seen a lot of changes and improvements, and that makes me feel good," he said. "To me, the United States is the best country in the world."