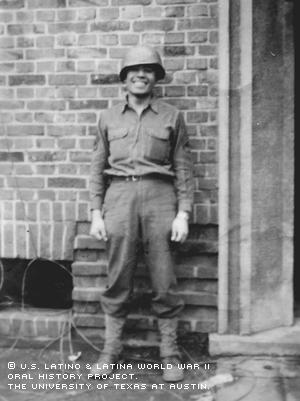 After a childhood spent dealing with discrimination in a small Kansas City-area community, Joe Jaime figured once drafted in 1942 into the Army, he’d finally get the chance to earn his American citizenship and ease the pain of the racial prejudice he endured growing up.

It wasn’t until Dec. 16, 1946, however, after being discharged from the Army and after World War II had ended, that Jaime finally was granted American citizenship.

The third of five children, Jaime emigrated from Mexico with his family in 1926, when he was only 4 years old. While he remembers nothing of his life in Mexico, he vividly recalls growing up in the barracks-style housing his father's employer, the Railways Ice Co., provided his family near Kansas City, Kan.

Jaime and his two brothers, Tony and Carlos, spent their summers working 12-hour days on a nearby farm to help their parents, Facundo Jaime and Esther Martinez Jaime, pay the grocery bills.

"We were Depression children, and we kept the family going by the boys working out on the farm," said Jaime, who picked onions as an adolescent and later, as a teenager, worked with his father packing slabs of ice into rail refrigerator cars.

On Dec. 7, 1941, he’d just finished his work on the loading dock when he heard the news that Pearl Harbor had been bombed by the Japanese.

"We heard it on the radio there," Jaime said. "This was about 1 o'clock Sunday. And I knew then that [my brothers and I] were gone. I ran home and told my mom about it, and she started crying."

Believing he and his brothers would inevitably be drafted, Jaime, then 19, decided he’d volunteer for the U.S. Air Corps. Because of his Mexican citizenship, however, the Air Corps rejected his enlistment, as did the Navy later, and also the Army, right before he was drafted.

His dreams of becoming a fighter pilot were dashed. After his high school graduation, Jaime passed the Navy welding test to go to work, but his citizenship status prevented him from getting a job building beach-landing craft for the Navy. He’d hoped to use his skills as a starting point for his enlistment.

"At that point, I was pretty upset," Jaime said. "I wasn't mad; I was just upset. You have to go by the law, but I thought the law was unfair."

Jaime was finally drafted into the Army on Sept. 18, 1942, and, after training at Camp Bowie in Texas, was assigned to Battery C. of the 422nd Field Artillery Regiment, which later became the 422nd Field Artillery Group. He was in the Service Battery 692nd Field Artillery Battalion of that group, and they were sent overseas to Europe. His tour began in Scotland, continued on through England, landed in France on 14 Sept. 1944, and served in France, Holland and Belgium, concluding in Germany. They were equipped with 12 105-mm Howitzers, towed behind GMC 6X6 trucks and supported the infantry divisions in combat.

Jaime says he carried a prayer book with him throughout his entire tour of duty in Europe. A priest in his hometown of Argentine, Kan., gave him the prayer book. Jaime says he read it every day, sometimes while lying in his bed under the covers -- flashlight in one hand, open prayer book in the other.

"It kind of gave me the strength to get through it somehow," said Jaime, who still has the prayer book in his possession. "I'm not a religious fanatic, but I do believe in the Maker. And he usually takes care of you somehow."

It was that faith-driven strength that helped Jaime endure nerve-rattling experiences such as having to duck German V-1s, endure a ship full of food-poisoned soldiers and watch the bodies of American soldiers get laid out on war-torn streets after traveling through Aachen, Germany.

Jaime would leave the war a decorated serviceman, having earned various medals and ribbons, including three Bronze Service Stars.

His military service may have proven his patriotism and loyalty to the U.S. government, but many back home in Kansas remained prejudiced, he says. Jaime's stories of home, both before and after the war, are peppered with accounts of segregated school systems, discriminatory restaurant service and invisible property lines that separated Latino neighborhoods from Anglo ones.

Remembering a conversation he had with an ex-high school chemistry teacher years after the war, Jaime explains how the teacher summed up the future of Mexican Americans in Argentine, Kan.:

"Your people will never make it," Jaime recalled the teacher saying.

Jaime says his encounters with prejudice in Argentine, as well as his experience serving in the Army during WWII, helped instill in him a desire to see Hispanics advance in American society. He also says Mexican Americans have come a long way since the war, despite the obstacles they’ve faced.

"I think we have become more conscious of how important education is," Jaime said. "It's the only way you're going to get ahead."

Jaime's two brothers, Tony and Carlos, also served in WWII. Tony was a platoon leader in the South Pacific who earned himself a Purple Heart, while Carlos was a squad leader who served in Europe.

After his Jan. 18, 1946, discharge, Jaime took an accounting job with J.F. Pritchard and Co., an engineering and construction company.

In 1950, he married Mary Morales, with whom he had three children: Richard, Robert and Patty.

Jaime worked for 20 years in accounting before going into insurance in 1966, where he worked in sales and management for another 22 years before retirement.

In 2000, he and Mary celebrated their 50th golden anniversary, an event he called "one hell of a party."

Looking back on his life before, during and after WWII, Jaime had this comment:

"The chemistry teacher was wrong. We made it."