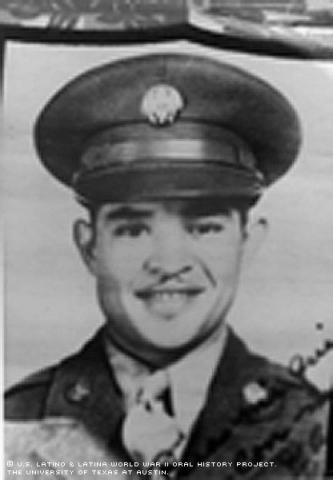 Even before arriving at the European concentration camps in 1945, Joe Lerma of San Diego and his division could smell the dead.

"The sight and smell of human death is terrible," he said.

His division's job was to inform the camp survivors that the war had ended.

"The people were afraid to come out," he said, describing the difficulty in convincing the men and women that conditions were safe for them - that the nightmare was over.

The Americans were also instructed to leave quickly to prevent contracting disease.

Gypsies and Spaniards were also found in the camps Lerma recalled, nearly 60 years later during an interview at his home in San Diego. Anyone who did not fit Hitler's ideal was at risk.

"It was horrible," he said.

Joe Lerma was born in El Paso, Texas, 1922. El Paso was not to be called home, however, as his father, Ramon, worked for a railroad company, keeping the family on the go. That same year, his father literally laid tracks to San Diego.

Tired of moving thousands of miles at a time, Ramon Lerma, found construction work through the WPA, a federal work program spawned by the New Deal. The family moved out of the railroad camps into a home in Barrio Logan, a neighborhood with a "bad reputation," according to Lerma.

The U.S. and the world were mired in the Depression by the 1930s, and Mexican Americans, in particular, were hit hard with extremely low wages and the threat of deportation. Government agencies "repatriated," or sent home, Mexicans in an effort to relieve unemployment for American citizens. To help keep the family from total financial ruin, Lerma and his siblings found after-school jobs in fish canneries or selling tacos and tamales.

"San Diego was tuna capital of the world," remembered Lerma. "We all worked in the canneries at one time or another."

The Lermas no longer made cross-country treks, but did move several times within San Diego. This pursuit for better housing, however, forced Lerma and his siblings into new schools. Some schools had only minority students, but many were racially mixed.

"We were kind of ashamed because the [white] kids were always calling us 'beaners' because we brought bean tacos for lunch," Lerma said.

Yet, the Anglo children often preferred those bean tacos and the Mexican American children traded the tacos for bologna sandwiches.

"I guess we were introducing them to our [Mexican] culture," he said.

While attending Memorial Junior High, the kids would gather at a field they called the "40 Acres" to watch, or sometimes participate in after-school fights.

"When you fought there, if you won or lost it was over. It wasn't like today with all the vengeance," Lerma said. "If you got beat, you accepted it.''

Not every day was spent being taunted as a "beaner" or fighting in a field behind the school. A reprieve from this life for Lerma came from the Spanish-American Institute in Gardena, California - a suburb of Los Angeles. It was a private, half-day art school, attracting students from as far away as South America and had such benefactors as the Maxwell family of Maxwell House Coffee.

However, Lerma was forced to curtail his art and return to San Diego when he got the opportunity to work full time in either the canneries or, during the fishing off-season, construction. Lerma completed his certificate at the Spanish American Institute but dropped out of Gardena High School in the 11th grade.

Finding work in construction, he caught what he thought would be his big break. Japan had bombed Pearl Harbor on Dec. 7, 1941, ushering the U.S. into WWII. The government was building an air base outside of San Diego. Lerma and a few friends jumped at the chance, skipping over the fine print: "work 10 hours per day, seven days a week."

Lerma worked at the construction site for two-and-a-half years, until he received his draft notice.

Lerma went through basic training at Camp Roberts in Little Rock, Arkansas, and then joined the 95th Infantry Division in Fort Sam Houston. Lerma's shooting skills earned him a spot in a sharpshooter's school at Fort Sam Houston, in San Antonio, Texas.

Troubles in the States soon became an afterthought as the 95th boarded the U.S.S. Mariposa and shipped out to England in late 1943. Lerma acted as scout and sniper for the division until its discharge in 1945.

In an act of unsurpassed courage, Lerma single-handedly captured a German bunker and machine gun during a battle, as told by the Sun Harbor Catch and Can News in April 1945. A German officer tore a medal from his own uniform and gave it to Lerma, humiliated by being captured by one man. Injuries and bravery beyond the call of duty earned Lerma a Purple Heart and a Silver Star. Lerma had been actually recommended for a higher recognition (the C.M.H. Medal), but the Battalion Commander did not approve it, and had to receive the Silver Star instead.

It was exposure to unsanitary conditions in the trenches that took its toll on Lerma's health, leaving him with "trench foot," rheumatic fever, and wounds. The illness results from bacteria that infects the joints and causes high fever and pain similar to rheumatism.

He received a medical discharge and spent all of 1946 in veteran's hospitals in Santa Fe, N.Mex. and Pasadena, Calif. Life in the trenches almost cost Lerma his feet, but left him a reminder by scarring his soles and permanently stripping away his toenails. He gradually remastered the once simple task of walking over the next three years. The lingering physical ailments of the war plague him even today, as he underwent a hip replacement in March of 2001.

"My son asked me if we were still going [hunting] this year, like I was dying or something." laughed Lerma as he talked about the surgery. "The doctor said I can make the trip at the end of the year."

Lerma refuses to let the chronic pain restrict his activities. He enjoys painting aspects of American Indian culture, and hunting and fishing in Colorado and Utah with his son and grandson.

In the true fashion of a man never satisfied, he extolled today's Mexican Americans' progress but fiercely urged the young people to get more education. He gave several examples of men unable to reach their potential from his days as a shipyard General foreman. Unfortunately, there were many times when he was forced to pass up some of his employees to lead men or foremen who refused his advice to learn to read and write.

"Getting an education is the only way you'll move up," he said, "or you'll always be doing general labor work."