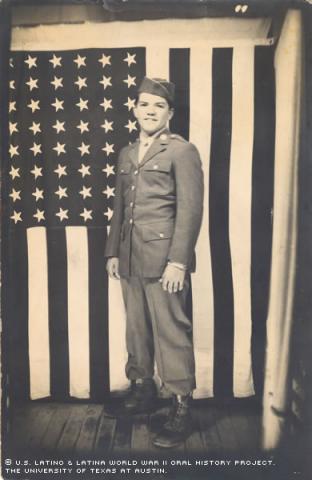 Minorities living in Texas owe Joe Bernal a favor. As a first-term State Representative from San Antonio’s West Side during the 1960s, Bernal’s first bill aimed to wipe discrimination laws off the books.

At a time of heated political debate regarding racial tensions wrapped around the country, he not only actively sought out change, but ushered in that change.

Over the course of the last 78 years, Bernal has made service to his country a priority. Whether it was in the military, as a teacher or in the Texas State Legislature, Bernal dared to make a difference.

“We grew up poor, but we didn’t know we were poor. We were very rich in spirit, spiritually rich, and [a] fantastic family, a fantastic mom that raised 9 children all by herself,” Bernal said.

Yet his mother refused to accept government housing or food stamps.

“I always lamented that I couldn’t move into one of those public housing apartments with heat in the winter,” said Bernal of when he was a child in San Antonio.

His first taste of politics came as a Student Council representative at Lanier High School. To encourage students to speak English, ribbons reading, “I’m an American, I speak English,” were given out at the beginning of the week. He recalls that when student council members heard kids speaking Spanish, they’d take away the ribbon as an embarrassing reminder. As an advocate for bilingual education, however, he notes that developing the ability to articulate an argument in English is just as important as being able to speak and write in two languages, the skills on which bilingual education focuses.

As a child, Bernal loved school and hated summer, but as his time at Lanier High School ended, he knew the next step would be military service. Upon graduation in 1944, he qualified for college training under the Army Specialized Training Reserve Program.

The year was 1945, and while the European front began declaring victory, tensions on the Pacific front continued strengthening. With a high casualty rate among the youngest soldiers, the United States Congress required that all those under 18 and a half years complete an additional six months of training prior to deployment.

After basic infantry training at Ft. Hood, outside Killeen, Texas, and extended training at Ft. Ord in Central California, Bernal boarded a boat bound for the Philippine islands of Leyte, Mindoro and Luzon, as well as Tokyo, Japan. He never saw combat, however, as his high school typing class earned him an eight to five desk job as an Air Command clerk in Tokyo. While he says he was mocked for taking the typing class, it might have saved his life.

Bernal says the highlight of’ his 22 months of duty in Tokyo occurred every day at 4 p.m. Across the street from his office building stood the Emperor Hiro Ito’s palace, surrounded by a large moat and grounds comparable only to New York City’s Central Park. At that precise time every afternoon, the staff would head over to General McArthur’s office to watch as the Emperor paraded by in a golden carriage with gleaming groomed horses. With the American servicemen looking on, all Japanese present dropped their heads to the ground in respect.

“All I knew is it was a very different world,” Bernal said.

With an eight to five job and daily viewings of the emperor’s pomp and circumstance, Bernal equated his experiences with a vacation. At one point, five of his seven brothers were enlisted in the military, yet he says he probably left with the best experience.

Staring at a picture taken Sept. 1, 1945, he sees a strapping man in uniform only nine days from deployment and smiles. Before leaving for war, he says he always felt like people looked at him as a Mexican, but in the service, he was an American. Upon his return from the Pacific, however, attitudes hadn’t changed, he says.

Discharged Dec. 9, 1946, it took Sergeant Bernal less than a month to take advantage of the G.I. Bill by enrolling in San Antonio’s Trinity University as a Physical Education major. He decided to become a coach, like Nemo Herrera, his high school basketball coach, who so positively influenced him as a student.

“If it hadn’t been for the G.I. Bill, life wouldn’t have been as easy as it was,” Bernal said.

After losing his varsity letter status after his freshman year, Bernal says he refocused his studies on sociology and education. He became a youth leader when he wasn’t in the classroom, keeping him active in the community and earning the respect of his elders.

Both Bernal’s bachelor’s and master’s degrees were paid for by the G.I. Bill. Through a state-sponsored program, Bernal also earned a Ph.D. in Cultural Foundations in Education from the University of Texas at Austin.

He largely attributes his eventual winning of a seat in the Texas House of Representatives to his having shown respect for his elders.

“I was a good Chicano. That’s why they wanted me,” Bernal said.

At first, he says he was shocked by the idea of being a politician, but then realized it was a way he could really help the Mexican community. Chicanos were dramatically underrepresented at the time in the Texas Legislature.

“When I got into politics, I found out that 80 percent of our people weren’t finishing high school. Now it’s 30 percent,” said Bernal, later commenting in writing that that’s “still bad.”

Many of those students now have a better chance of going to college as well, especially in San Antonio. During his 8 years in the Legislature, Bernal was instrumental in creating the University of Texas San Antonio.

He was also instrumental in the formation of a second medical hospital in San Antonio. During his first term alone, he managed to pass 3 bills, including a controversial one regarding segregation laws. He also authored legislation creating the Dental and Nursing Schools, components of San Antonio Medical School, he later wrote.

“The years I spent in the senate, I consider some of my best years,” Bernal said.

Although Texas redistricting unseated Bernal by 99 votes in 1972, he was able to return to his other love – teaching. He’s now an adjunct professor in multicultural and bilingual education at UTSA, Trinity University and Our Lady of the Lake, as well as a member of the Texas State Board of Education.

Mr. Bernal was interviewed in San Antonio, Texas, on February 12, 2006, by Valentino Mauricio.