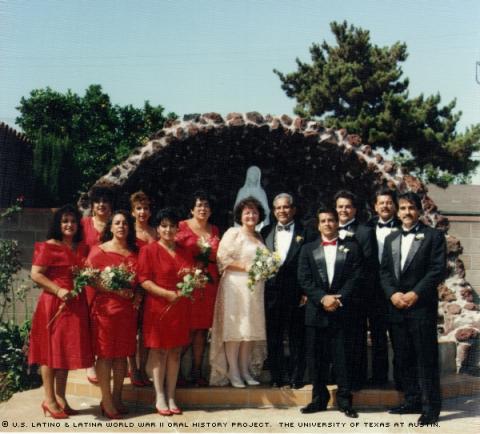 Jesus Leyva Armendaríz went from the depths of poverty during his Depression-era childhood in El Paso, Texas, to unimagined heights as a member of the famed "Blue Devils" of World War II.

Armendaríz served as a medic in Company C, 313th Medical Battalion of the 88th Infantry Division, known as the Blue Devils; so nicknamed because they fought like devils and wore a solid blue patch shaped like a four-leaf clover. They landed and trained in North Africa in December of 1943 and entered combat in Italy in February of 1944, steadily advancing northward until the German forces in Italy surrendered on May 2, 1945.

His most vivid memories are of the liberation of Rome. He remembered seeing the fabled Coliseum as they walked into the city, their triumphant march made difficult by the throngs of grateful Italians showering them with wine and kisses.

"It was beautiful," said Armendaríz of the imposing structure. "A lot of what people pay to see now."

Armendaríz, 81, detailed times of great difficulty as well as times of great joy as he grew up, fought in WWII and went on to marry and have 10 children of his own.

Born in El Paso, Texas, in 1921, he spoke only Spanish growing up until the age of 9, when he began school. His father died when he was 5, and because his mother moved around often, there was no time and money for school.

His mother later remarried and the family moved to the eastern part of Los Angeles, California. But Armendaríz’s new stepfather had a severe drinking problem and was rarely home. Because of this, he was again forced to leave school to help support the family.

He returned to El Paso.

"I took over because my stepfather would only come home once every two weeks," Armendaríz said. "He just kept drinking and drinking."

Armendaríz, who was 9 at this time, would wake up early in the morning to go to the market in search of discarded crates of fruit left by vendors, fix them up for display purposes and then sell them for 10 to 15 cents.

"I didn't know we were poor because everyone else around us was," Armendaríz said.

He remembers the exact place he was in when he heard the news in 1941 that the United States had declared war. Then 20, he was chatting with friends outside church before the services.

"Someone said, 'they just attacked Pearl Harbor,' and we didn't even know where that was," Armendaríz said.

Armendaríz was living in San Francisco, where he had a job cleaning ships. Shortly after the attack, many of his friends began enlisting in the armed forces. He, however, initially opted to stay on the homefront and work, rather than go to war, as he had to support his four-member family, as well as himself.

In addition to cleaning ships in San Francisco, he met and fell in love with the woman who would become his wife. In correspondence after his interview, Armendaríz said he met Celía Ceballos on St. Joseph's Day, March 19, 1942, and married her four months later, on July 3.

"It was love at first sight," he said.

Shortly after the wedding, Armendaríz received a draft notice and was directed to report to report to Fort Bliss in Texas. As a result, he and Celía packed their bags and moved to the outskirts of El Paso. He was initially run through an induction center where he received uniforms, shots and dog tags and was eventually told he was to be a medic.

A newlywed, he admittedly had no desire to be a soldier. Still, he was sent to Oklahoma to be trained in tending to the wounded. He was taught how to carry them to a safe place, give injections, treat broken limbs and other wounds, stop bleeding, prevent shock and other medical skills. The training took 14 months, during which time Celía, who was living near the base in Oklahoma, was pregnant with their first child. He was able to see his wife every day as long as he reported to duty on time.

But those visits soon ended when he and his company were sent to war in North Africa, arriving on Nov. 21, 1943. His son, Jesus Jr., was born five days before Armendaríz reached Africa on Nov. 16, 1943, but he wouldn't know this for another three months after his arrival. He finally got to see Jesus Jr. when he was 27 months old. He and Celía would ultimately have 10 children: six girls and four boys.

"All our children are married now, and all have attended universities, and have very good jobs," wrote Armendaríz, a father's pride palpable in his letter. "Thank God."

Armendaríz proudly displayed a picture taken at his 50th wedding anniversary on July 3, 1992. In the photo, he and his wife are surrounded by their children, among them Jesus Jr., who is now 57 years old.

Italy would mark Armendaríz’s entry into battle, and his first occasion to treat the wounded. His duty was to administer first aid, similar to the work of a modern-day paramedic, he recalled. The stress of battle wasn’t halted at day's end, as the medical aid stations were shelled and mortared and machine-gunned at night, he recalled.

By the time Italy surrendered, Armendaríz had been wounded twice during combat, but nothing severe. He still carries a small piece of shrapnel in his hand. He can still feel it, but doctors say if it's not bothersome, it’s better to leave it there and avoid intricate surgery that has no guarantee of success.

He said he mended his other wounds himself: "If I could fix a man with a wire and safety pins, I can fix myself," said Armendaríz, referring to the primitive methods he was forced to employ as a wartime medic.

Armendaríz was honorably discharged on Feb. 12, 1946, at the humble rank of Private First Class, although, he said he rose significantly up the ranks in the medical battalion, to the positions of post commander, district surgeon and chairman of civil disaster, among others. He earned several medals during his tour of duty, including the Purple Heart, Bronze Star, three Battle Stars, a Good Conduct Medal Presidential Citation, a Meritorious Service Emblem, a Medical Combat Badge and others. Other than his medals, he displayed another tangible reminder of his war years: an unopened pack of Lucky Strike Green Pack cigarettes that are 57 years old.

He remains active in military civic duties, including membership in his local Veterans of Foreign Wars post in 1980, for which he served as post commander from 1987-88.

When asked if the war changed his life, Armendaríz responds unequivocally in the affirmative: "It changed my way of being. Maybe I would have divorced, because when over there, you realize that you have someone who you love and you have a reason to stay alive and come back, but I guess it was my destiny."

He added in his letter that he was given much support by loved ones in his post-war life: "a big change from overseas life," he noted, particularly during a period when he sought rehabilitation in order to adjust to being back home.

Armendaríz worked as a carpenter after his discharge and built houses until retiring. From humble beginnings in El Paso, he relishes thoughts of having traveled the world, seen the face of war and lived to tell the stories. He doesn't look back with regret, but rather with fond memories of friends he made and relationships he has kept.

Mr. Armendaríz was interviewed in Los Angeles, California, on March 23, 2002, by Mariel Garza.