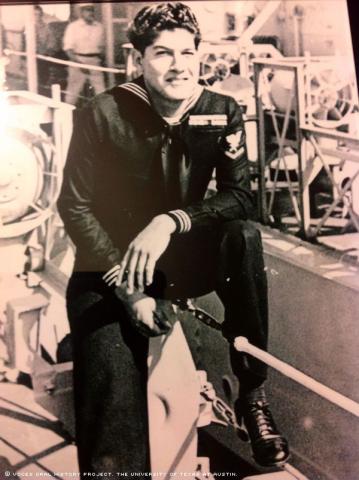 Jesus "Jess" Esparza Muñoz emerged from a fragmented and impoverished family to live a version of the American Dream, including a stint in the U.S. Navy that allowed him to travel the world.

"I saw a lot of the world. I had a good time in the service," Muñoz said. And he enjoyed his time in the Navy because he "didn't encounter anything bad about it," except for occasional rough seas. He said the ship he was serving on, the USS Brush, was a small destroyer that "bounced around like a cork, especially when the waves sometimes reached up to 30 feet."

He recalled that one man died when he was swept off the back of the ship by a wave.

Although World War II ended two months before he joined the Navy, Muñoz said he did see people who were wounded in war, even though he never saw action.

"My namesake is Jesus, so I know He takes care of me," Muñoz said.

Muñoz was born in Globe, Ariz., a small copper mining town, on Feb. 4, 1928. A year later, his mother, Monica Virginia Muñoz, died giving birth to his little sister. His mother was only 22 years old and was giving birth to her fourth child. The infant girl died two weeks later.

Muñoz, his older brother and a younger sister were then cared for by his maternal grandmother and their Aunt Jenny. He said Aunt Jenny "was like a mother to us."

Because of the Great Depression, times were difficult and there were no jobs.

"We were on welfare, like everybody else," he said, adding that the family was able to have meat by raising chickens and rabbits. Welfare provided products like flour and powdered milk.

When he was about 15, he worked in the asbestos, quicksilver and copper mills of the 3M Co., as well as the Globe foundry during the summer. He recalled the jobs as being hard work, with long hours and no breaks. But the money was much needed by the family.

Mexican men who worked in the copper mines were paid less than Whites. Muñoz never forgot the humiliation he felt when, during his first furlough from the Navy, he took his grandmother to a Phoenix restaurant and they were refused service, even though he was in uniform.

He joined the Navy on Oct. 24, 1945, after finishing 10th grade. He was able to earn his high school equivalency diploma after serving in the Navy.

Muñoz joined the Navy to see the world. He remembered visiting places in the Pacific like Hong Kong, China and the Philippines. One of his favorite experiences was traveling up the Columbia River to Portland, Ore. He was in the Navy for three-and-a-half years.

Muñoz was first stationed in Hawaii and continued to Guam and the Marshall Islands. He was originally part of the "deck force" responsible for cleaning and painting the 175-crew USS Brush, an Allen M. Sumner Class destroyer (DD-745).

But he switched to laundry duty after being asked and, although he was reluctant at first, he discovered that additional freedoms were granted to this section. The other two Hispanic service members were also put in the laundry.

Muñoz said he recalled that the Navy was mostly White at the time. The ship mostly patrolled the South China Sea. Shore leave, he recalled, was spent mostly in Shanghai and consisted of visiting bars and "having a good time."

But Muñoz recalled one unpleasant incident in 1948 when he was beaten by cops in Tijuana, Mexico, while he was on leave. He said he was trying to assist a drunken friend who was being beaten by the police. Muñoz said he was beaten by police for interfering and was hauled off in a police van. But he managed to buy his way out of jail, because he had hidden $23 in his shoe.

This incident also got Muñoz court-marshaled for being AWOL. Years later, he would still refuse to return to Tijuana. He later met a man in Long Beach, Calif., who had served on his same ship eight years after him, and they remained connected.

Muñoz was discharged from the Navy on Feb. 2, 1949 at the rank of petty officer third class. After leaving the Navy, Muñoz got a job at Sears, where two of his uncles worked. He worked at a warehouse in East Los Angeles for 15 years. He became a salesman for Sears in Buena Park, Calif., in the mid-1960s.

He did well as a salesman and was able to provide for his family and send his daughters to college.

After retirement, Muñoz became "pretty good" at golf and continued to play with a group that "[has] been playing for years". He said that he scored in the low 80s. He said golf "takes a lot of practice" and age takes a toll on one's ability to play it.

"I loved golf not only for the camaraderie of being with my buddies, but for the fresh outdoors environment. And, of course, it was more fun than working," he said.

Muñoz was married in 1950 to Elisa Olivas. At the time of his interview, he and his wife were planning to celebrate their 60th wedding anniversary in September 2011. His wife grew up in Miami, Ariz., a small town near Globe. She moved to Los Angeles after high school graduation and met Muñoz when he was living there after leaving the Navy.

Muñoz and his wife had three daughters; one, Monica, was killed by a drunk driver. She was 21 years old. Muñoz said that losing a child is "the toughest blow you can face, it's with you for the rest of your life."

"I'll never forget seeing her in a casket and thinking, 'What are you doing? I should be there,' " he recalled. " It was so unnatural to be burying your daughter, instead of her burying you."

Their other two daughters maintained their Southern California ties. Their second daughter, Marina, graduated from Whittier College with bachelor's and master's degrees in arts. She taught school in Whittier for more than 25 years. A third daughter, Michele, was a set decorator in Hollywood and New York.

Mr. Muñoz was interviewed by Henry Mendoza in Los Angeles on June 9, 2010.