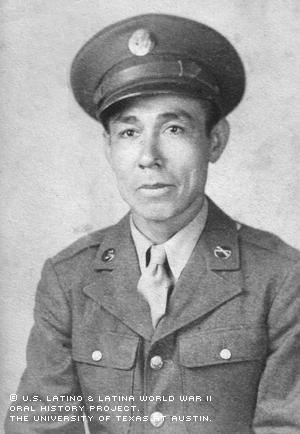 At 30 years of age, Jesus Castro was one of the older soldiers drafted for duty during World War II. However, this soldier and father of six children wasn't about to let his age hinder his dedication or performance.

Born in Matamoros, Mexico, Castro moved with his parents as an infant across the Rio Grande River to Brownsville, Texas. José Castro, Jesus' father, worked as a carpenter in Brownsville, as well as other parts of South Texas’ Rio Grande Valley, to support his family. Castro’s mother, Maria Gonzalez, stayed at home and raised Castro, along with three sisters and brother.

Castro attended elementary and middle school in Brownsville, making it to eighth grade in 1922. Once he completed his schooling, he began working as a carpenter in Brownsville and neighboring areas.

Castro met Elvira Hernandez while working as a carpenter in Brownsville. After a brief courtship, the two were married. The couple had six children: three boys and three girls.

When he was drafted, Castro had the chance to ask for a deferment and remain at home with Elvira and the children. He knew of many men who took advantage of their age and families to avoid going to war; however, he chose to accept what he saw as his responsibility.

When Castro went to the train station to set off for basic training, no one saw him off. He’d asked his wife to not be there; he wanted to do it on his own, he says.

His next stop was Fort Riley in Kansas, where he spent the next 30 days in basic training. Right away, he proved himself to the relatively younger troops.

According to Castro, a group of young men playing football when he entered the camp gave him a look as he went by that seemed to say, “What are you doing here?”

"I was an old man in comparison," Castro said.

The football accidentally rolled over in his direction, so he picked it up and threw it back fast toward the young men; their mouths dropped, recalls Castro, adding that immediately thereafter, he joined the base’s organized football team.

"I impressed them," he said.

At the end of his 30 days of training, Castro was sent by train to Fort Mead in Maryland. From there, he was shipped across the Atlantic Ocean on the Queen Mary.

He arrived in Scotland and quickly noticed something that took him by surprise. As the soldiers were exiting the ship, music began to play.

"There was a Big Band playing for us suckers," Castro said.

From Scotland, he made his way across the English Channel to France. And later, from a Navy boat ramp, he set foot on French soil. He was put in with the 4th Cavalry Group right away.

Castro was moved to the front line in Germany almost immediately. He remembers the experience as being fairly calm and laid back.

However, that changed one day when he and his fellow soldiers were passing time on a levee. A soldier fired a .45 caliber submachine gun in Jesus Castro's direction. Although he wasn’t hit, the sand from the bullet's impact flew up into his nose, eyes and ears, incapacitating him.

"I've always been told to keep my mouth shut," Castro said. "I guess I forgot."

Because they were too close to the enemy, the men were unable to move Castro for two days. So he was kept in an old shed during that time, where one of the radio guys helped remove the sand from his eyes and ears.

He was finally relocated to a temporary hospital in Germany. Although he received care, it was too late; he’d already lost the majority of his hearing in both ears.

A visit from his captain while he was in the hospital meant a great deal to Castro. He says it further showed him that his captain respected and appreciated all his men, regardless of their race.

It was during his stay at the hospital when he heard on the BBC the war had ended.

Upon leaving the hospital, he made his way through Europe. He spent time in Holland, Belgium, Germany and France. Although he was welcomed in each country, Castro most remembers the hospitality of the people in Belgium.

"At one hotel, I put my boots outside one night," he said. "The next morning when I woke up, they'd been shined."

When it was finally time for him to return home, Castro only had one request: He didn't want to fly.

"I told them I would go back by boat if I had to paddle it," he said.

Castro returned home to his wife and six children in 1945. He continued to work as a self-employed carpenter in the Brownsville area. He also became an active member of the Veterans of Foreign Wars and the Disabled American Veterans.

After his wife Elvira died from complications of epilepsy, Castro was left to raise his children. In 1973 he married Guadalupe Ornelas, after meeting her at a restaurant he frequented in Matamoros. The two settled in Brownsville and eventually had six more children. Castro says Guadalupe plays a great role in his life, as he’s hearing impaired and relies on her for help.

Today, Castro lives in Brownsville with Guadalupe, his daughter Melba and her children.

Mr. Castro was interviewed in Brownsville, Texas, on September 13, 2003, by Anthony Sobotik.