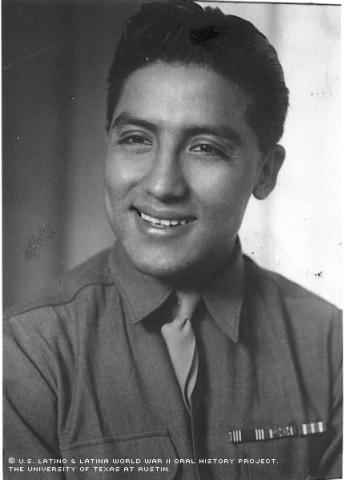 From a young age, Jessie Ortiz learned his Mexican American heritage would be an obstacle in a world dominated by what he calls the "white man's law." He would experience prejudice and discrimination -- even when he fought for his country in World War II. Looking back on his life, he recalls a story of constant struggle, survival and success on the battlefields of war and life.

Ortiz literally was born on the "wrong side of the tracks" -- the Southern Pacific Railroad Tracks, in Fresno, Calif. His parents, Felipa and Jose Ortiz, were Mexican immigrants.

He vividly remembers the start of the war.

"Me and the neighborhood boys were playing football. And, one of the boys said, 'They bombed Pearl Harbor,'" recalled Ortiz, who was 19 years old at the time. "Did we know about Pearl Harbor?" He shook his head no.

"So, we didn't think very much of it. Then, that evening [President] Roosevelt came on with a speech -- then I knew we were in trouble. And then we started getting papers -- pictures of all of the bombings that they had. All the fleet went down. That was a disaster."

Shortly after the Pearl Harbor attack, Ortiz and his friends received letters to report at an induction station in Fresno. In December of 1942, Ortiz enlisted.

He soon arrived at Camp Howze in Howze, Texas. Ortiz became a combat engineer. He learned how to blow up bridges, work a bazooka, paddle a boat without making noise, set explosives, and activate booby traps, among other things.

His division, the 84th Infantry, known as the Railsplitter, landed in England on Oct. 1, 1944. They marched across France, wiping out "small pockets" of Germans, and fought through Holland and into Germany by Nov. 17, 1944.

Finally, they arrived at Gielenkirchen, Germany, where they helped take over the small town. Just as they were getting settled, Ortiz remembers having to get up at midnight. The Germans had broken out in Ardennes and they were heading for Bastogne, Belgium.

Ortiz's convoy packed up and traveled for three days behind the Germans, trying to stop them -- thus began Ortiz’s participation in the Battle of the Bulge. It was crucial they hold onto the city -- if the Germans were to break through the American line, they would have five roads to spread out and advance. Ortiz was in Marche.

"Now, they break the Bastogne, we were supposed to stop everything. I mean, we were going to die there. The orders were, 'they will not pass,'" he recalled.

Ortiz remembers Germans who dressed in American uniforms and spoke English while trying infiltrate the lines.

"One of the patrols came up to us. We didn't know that there were Germans in American uniform. They came up to our point and we stopped them," he said. "But no, they were Germans."

One of his men figured out they were the enemy and shot one of them. A battle ensued. The rest of the Germans ran into the forest. Soon after, the convoy received word through the radio that there were Germans impersonating Americans and to not let anyone through the line.

Ortiz then began to lay mines as fast as he could to delay the Germans, who weren’t too far away. German patrols were all around the area.

"We could hear the battle, the battle was right over the hill. … Then, I hear [Christmas] music," said Ortiz, a devout Roman Catholic who was surprised at the sight of a Catholic Church in a little gully.

He and some other soldiers asked their captain for permission to attend the service. The captain agreed as long as they took their rifles and a radio with them in case they were needed.

"We go into this beautiful little church made out of brick and there's a priest saying a sermon when we come in. The priest sees us and he goes right into Consecration so he could give us communion right away," Ortiz said. "And, then the people moved to the side and we moved up to the altar."

"So, we received Holy Communion and then we went back to our holes in the snow," he said. "Oh ... but, that was a beautiful experience, to find a Catholic church."

As the Americans ran out of supplies and artillery during the battle, Ortiz remembers waiting in the extreme cold and hoping for the skies to clear up, so to allow the Allied planes to drop supplies. On the day after Christmas, Ortiz's prayers were answered.

Immediately, the Allied planes shot at the German convoys and the soldiers began to retreat. Another division took over and Ortiz's battalion returned to Gielenkirchen.

The Battle of the Bulge wouldn’t be the last battle in which Ortiz would fight. Many times, he'd come close to death and be saved by luck.

Ortiz said it was important for Mexican Americans to fight in the war and to prove themselves as soldiers overseas, to overcome prejudice back home. He became a tool and dye maker and retired after serving 31 years with the Vendo Manufacturing Company in Pinedale, Calif.

More importantly, however, he said he got the opportunity to really get to know the white man -- some who later became his best friends.

"It opened a new panorama," he said.

It was the first time Ortiz realized the white men bleed red -- just like he did. It was a metaphoric revelation: For the first time, he realized Anglos and Latinos were essentially equal.

"It was a source of education for all of us in the sense that we could look in the eye of each other," Ortiz added. "That was very, very important to get to know each other. It brought us to an understanding that we are all human beings. That we all need love. That we all need nourishment."

Mr. Ortiz was interviewed in San Luis Obispo, California, on May 6, 2001, by Cindy Carcamo.