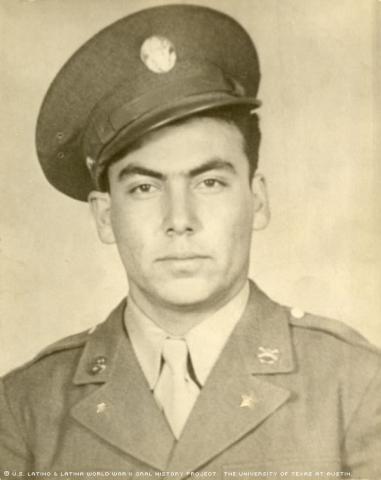 A trip across the Atlantic on the luxury ship the Queen Mary would seem like a dream come true for anyone, especially a teenager from a small West Texas town. But for Jessie Acuña, it was a trip into the unknown. The trek across the ocean would lead not to a vacation, but to war.

“They don’t tell you where you’re going,” said Acuña, as he thought back on the circumstances surrounding the eve of his departure more than sixty years ago. “We had to leave at midnight. They told us the day before to examine everything and make sure we had everything we were supposed to have.”

But even before he knew he was going to travel aboard the Queen Mary, which in 1944 was regularly used to transport troops to Europe, Acuña already had an idea he was headed to confront the Nazis. He’d just traveled by train from the site of his boot camp training at Fort Sill, Okla., to a staging area in New Jersey.

“They took us to a reception center and then they put us on a train to New Jersey,” said Acuña of the Army’s protocol when it came to moving troops. “We stayed there a couple of weeks. It seems like you’re just there, all at once. You’d just get on a train or a boat. I was just hoping I could get back.”

But getting back to his family in the small town of Trent in the heart of Texas’ cotton country would be a long, and at times, dangerous road.

As a member of the 101st Infantry Regiment’s Company B, Private First Class Acuña ultimately trained as a scout. But his initial orders before moving toward the heart of Germany were relatively uneventful for him. After crossing the English Channel by boat, he spent his days unloading C-rations in France.

That would soon change, however.

“I guess they were running out of soldiers,” said Acuña with a smile. “We had to go to the front line during the last six months of the war.”

Acuña was now on his way toward Berlin as part of the 2nd Division of the 3rd Army, which was under the command of General George S. Patton. It would be a gradual push forward.

“You know what you were going to do, but the trouble is, you’re not just going straight to the front lines,” said Acuña of the march toward the enemy. “You go by steps. The first place, you’re just waiting.”

A wait that took longer because of the brutally cold winter and the snow that came with it.

“We weren’t trying to push forward then, we were just standing still,” Acuña said. “With the snow and the rain, the tanks couldn’t move.”

But as spring approached, the 2nd Division was on the move again, and Acuña still hadn’t encountered the Germans. Now, much of his time was spent in the trenches they dug, known as foxholes.

“We weren’t doing anything – just staying there,” said Acuña of the 24-hour stints in those foxholes along the front line. “You’d have to stay there day and night until another crew relieved you.”

But the tension-filled monotony of this routine changed dramatically when Acuña and about a half-dozen other men were sent on a scouting mission. They were to cross the front line and determine where the enemy was and what they were doing: The reality of war was front and center.

“I was hoping I’d come back,” Acuña recalled.

After roaming enemy territory overnight without ever finding German troops, they would, in fact, come back. However, it was on that return trip when Nazi soldiers appeared in a totally unexpected fashion along the same route they’d taken in the opposite direction hours earlier.

“We just hit the wrong place,” said Acuña of the moment they walked up on a campsite of German soldiers. “They were sleeping.”

Despite being caught off guard by the Americans now before their eyes, the Germans significantly outnumbered their unexpected visitors.

“I remember thinking, ‘we’re just captured,’” said Acuña of the strange and frightening encounter. “I didn’t know what was going to happen to us.”

While it was clear to the soldiers involved on both sides of the conflict that the Allies were winning the war, it was still business as usual when it came to captured soldiers: He and the other Americans were headed to the German prison camp known as Stalag 2-A.

“They had all kinds of people there,” said Acuña of the camp that was his home away from home between four and six months. “It was a big camp.”

In fact, a few thousand soldiers were kept at Stalag 2-A near Limburg, Germany, including American, British, Greek and Czech troops, among other nationalities.

After settling into an unsettling routine, Acuña jumped at the chance to leave the camp, even if it meant hard labor.

The Germans would occasionally seek out volunteers for work detail in the nearby countryside, and now they needed those with farming experience. Acuña’s days helping his dad in the cotton fields of West Texas turned out to be his chance to leave Stalag 2-A, if only for hours at a time.

“I didn’t want to stay there, so I volunteered,” he said.

Acuña remembers the scene as if it were yesterday. The German soldiers lined up the prisoners and picked 8 people. Among them were Acuña and four other Latinos from Texas. One was from San Angelo and the others from the Rio Grande Valley.

“The farm we were on was about 80 miles from the Russians,” Acuña said.

And after about a month of working this rural farm, word spread to those guarding these prisoner farmers that the Russians were advancing toward them.

“Our guards didn’t want to end up on the Russian side,” said Acuña, as he described his group’s sudden march toward where they believed the advancing American troops were.

They were on their own now. As night fell, Acuña and the others he was with could see flashes of lights from canon fire as the Allies took Berlin.

“By the time we crossed to the American side, the war was over,” Acuña said.

Now, the voyage back home via the Queen Mary was faster, yet more relaxed.

“It took 12 days to get to England, and coming back only three days,” said Acuña of the trip to and from the U.S. aboard the famous ocean liner. The voyage to Europe was longer because the ship had to serpentine to avoid German submarines. “We had a lot of wounded soldiers on the return trip who needed to go back home to hospitals,” he said.

Fortunately, Acuña didn’t suffer their fate. He finished out his service at Fort Ord in California. But even then, like much of his time in the Army, he was uncertain exactly what was next.

“The war in the Pacific was still going on,” he remembered. “New recruits were coming in every three weeks, and we had to check them out to make sure they had all the equipment needed to go overseas.”

And while he still wondered if he would also be called to fight in the war against Japan, out of the blue one day the Army summoned him to get a physical in advance of his discharge. He was officially discharged on Dec. 3, 1945, at the rank of Private First Class and having earned the World War II Victory Medal, American Campaign Medal, Good Conduct Medal and European African Middle Eastern Campaign Medal with one Bronze Star.

“I was happy,” Acuña recalled.

But the happiness was short lived. His mother, Mary Ann Hernandez Acuña, was dying of cancer. He spent several months taking care of her before she died. Six months later, his father, Sesario Acuña, also died of cancer.

His parents had moved to West Texas from Mexico, hoping for more opportunities and a better life. A farmer by trade, Sesario had worked most of his adult life at a cotton farm outside the town of Trent in exchange for a certain amount of acreage for his own benefit.

“We’d buy groceries on credit,” said Acuña of the income that depended on nature’s fortunes. “That’s the way we survived.”

By the time Acuña was about 14 years old, he was helping work the cotton fields with his dad. But it would only be one or two days at a time, as his parents made sure their four sons and two daughters received an education. They all went to the school in Trent, which taught every grade under one roof.

While Spanish was spoken in the Acuña home, the children learned English in school; speaking Spanish in the classroom wasn’t allowed.

“First Grade was difficult, but it got easier as I learned English,” he said about his experience in a school with few others who experienced a similar cultural challenge.

But during his time in the Army, Acuña said he never experienced any problems because he was Latino.

“Everything was the same for everyone,” he said. “Nobody criticized us.”

Once he was all grown up and back home from war, he faced both challenges and opportunities. Among other difficulties, he theorizes the vaccines he and fellow soldiers received in preparation for the war took a toll on him.

After the death of his parents, he farmed his father’s land and went to school with the idea of becoming a mechanic. But then a temporary opportunity filling in for someone working for the Santa Fe Railroad turned into a 34-year career.

“I didn’t want to work for the railroad at all, but they kind of forced me,” he said with a grin. “But the other guy didn’t show up, so I stayed there.”

World War II was a turning point for Latinos in terms of opportunities in the U.S., Acuña said.

“It took five or six years to get better,” he said. “When I started, they started improving salaries, so it got pretty good. In the 1950s, it got level.”

Today, he and his wife, Mary Rodriguez Acuña, live in Brownwood, Texas, an hour or so down the road from Trent. They both enjoy retired life together, staying involved at St. Mary’s Catholic Church, where their two sons, Gene and Michael, grew in their faith.

And both Mr. and Mrs. Acuña have faith their children live in a country with better opportunities than those they had, thanks to the college educations both sons received.

“It’s best to get all the education you can these days,” Acuña said. “Now you have to make a lot of money to make a living.”

And while Acuña doesn’t talk much about his time in the Army, his pride is unmistakable through his involvement with the Veterans of Foreign Wars. Spending time with fellow veterans gives him the opportunity to pause and reflect on WWII and its meaning today.

“I don’t think that anybody would want to experience that, because there were a lot of people who didn’t come back,” he said. “I feel sorry for them.”

Although he’s proud of having served his country, Acuña says he never received the military honors he was promised. “He was told they would be sent to him but he never received them,” said his son Mike in an e-mail. “My dad assumes that they were lost in transition due to the abrupt end to the war and the sudden change of plans from re-deployment to discharge.”

Regardless, Acuña says his and others’ sacrifices weren’t in vain. Then, and now, Acuña believes Hitler’s aggression, left unchecked, could have spread even further with dire consequences.

“I’m proud that I could be there to help,” Acuña said.

Mr. Acuña was interviewed in Brownwood, Texas, on September 15, 2008, by Paul Brown.