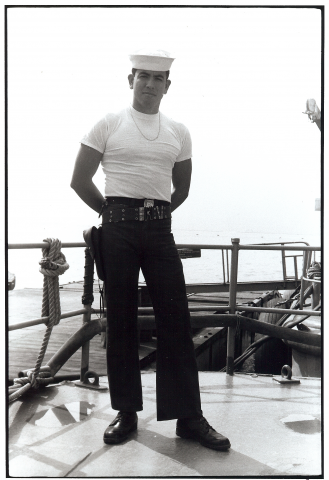 Jesse Herrera grew up on the South Side of Chicago in a working-class neighborhood where many of his peers went straight from high school to jobs in the steel mills.

That wasn't the future he wanted for himself. But he didn't know anyone who had gone to college. "It was alien to me," he said. The Vietnam War was underway, but Herrera didn't want to wait to be drafted, which meant he'd go right to the Army. "The Navy appealed to my sense of adventure" and offered a chance to see the world, he said.

On Aug. 4, 1963, just two months after graduating from high school, he enlisted. He would spend the next eight years in the Navy, including duty in Vietnam. He later built a career as a professional photographer.

The oldest of three children, Herrera was born June 7, 1945, in Monterrey, in northern Mexico. He was 12 when his family emigrated to the U.S., settling in a neighborhood that included Latinos, Poles, Irish and Germans.

His father, Jessie Toledo Herrera, was a machine operator for Johns Manville, which made insulation. His mother, Maria Luisa Herrera, was a homemaker. He had two younger siblings, Patricia and Roberto.

Herrera was sent to boot camp at Naval Station Great Lakes, north of Chicago. There, most of the career enlisted men were from Southeastern states, and Herrera said they often were "narrow-minded." The food was tailored to that population, and Herrera found himself faced with strange dishes such as grits and okra. “It was definitely a clash of cultures,” he said.

After basic training, he was sent to Puerto Rico, where he served at the Roosevelt Roads Naval Station and as an electrician on the USS John King, a guided missile destroyer. From 1964 to 1965, the ship did a shakedown cruise in the Caribbean and then sailed for a six-month tour of the Mediterranean.

On the way, the men had little in the way of recreation except for "swim call." The ship would stop in an area thought to be free of sharks, and the men could dive about 15 feet from the rear of the ship into the ocean.

He was then sent back to Great Lakes to advanced electrical school for four months before he requested an assignment to Vietnam in 1967. "I knew nothing about Vietnam," he said. "I was 20. You think you are bullet-proof."

He was sent to Camp Tien Sha, where his basic duties were to guard incoming supply shipments, “everything from Coca-Cola to helicopters.” His assignment also took him to a camp on the outskirts of Da Nang.

The Navy offered service members an enticement if they would re-enlist for another tour of duty -- a month anywhere they wanted to go. "I went to England. I stayed mostly in London," he said. And he spent his periodic R&R (rest and recreation) breaks in Hong Kong, which he visited three times.

Back at Great Lakes, he met his future wife, Ruth Ann Pluta, a nursing student at Loyola University, at a USO dance. They married Sept. 10, 1970.

He had dabbled in photography; his grandfather had been a professional photographer and let him help in the darkroom when he was a child. During one of his Hong Kong trips, he bought his first SLR (single-lens reflex) 35 mm camera, for about $100. Back in Illinois, he took some photo correspondence courses, then took classes at Columbia College in Chicago. And it finally hit him: "This is what I want to do."

The Navy would not let him switch from being an electrician to a photographer. When the Navy offered an early separation option in 1971 -- after 8 years instead of the usual 10 --, he went for it. His last duty assignment was on the USS Wasp, a destroyer.

To support himself, he worked in various studios around Chicago. He applied to, and was accepted by, the University of Illinois Chicago School of Art and Architecture, earning a bachelor's degree in 1975.

After his graduation, he got a job as a corporate photographer at People’s Gas Co. in Chicago. In 1977, Marissa, the first of his two children, was born. A son, Mario, was born three years later, after the family had moved to Austin, Texas.

For 25 years, until 2013, Herrera was a photographer for various Texas state government entities, including the Texas Department of Agriculture, the State Preservation Board and the Texas House of Representatives. For 19 of those years, he also taught photography at the Laguna Gloria School of Art in Austin.

Despite his success as a photographer, he decided to continue his education and earned a master’s degree in photojournalism at the University of Texas at Austin in 1990.

Herrera’s photography has been featured in major exhibits in Chicago, and he created several books of his work. He regrets that he never thought to document his experience in Vietnam with a camera. “As a photographer, I felt those years had been lost. They were wasted,” Herrera said.

Herrera has two pieces of advice for future generations. One is to examine how their stories relate to their families’ stories and the other is “to know how important writing down your family history is.”

For his Vietnam service, he was awarded the National Defense Service Medal.

Jesse Herrera was interviewed by Manuel Aviles-Santiago in Austin, Texas, on Aug. 8, 2011.*