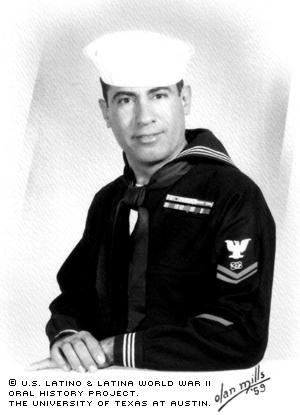 Jess Medina witnessed death for the first time as a little boy when he saw a man get run over by a streetcar.

Because of this experience, Medina says he had no fear when he had to piece together bodies of fellow seamen after a kamikaze crashed into his ship.

It was during the Battle of Okinawa in World War II when Medina, a naval radar man, was on duty as a radar operator below deck on the USS Tennessee. The first attack occurred on the afternoon of April 12, 1945. According to historical accounts of the attack, the Tennessee, rather than providing fire support, was in air-defense formation -- and came under heavy attack by suicide bombers. One kamikaze, an Aichi A6M "Val" divebomber, was spotted by American gunners, who struck the plane before it hit the ship. The plane was smoking as it fell through the deck. The 250-pound bomb it carried exploded, killing or fatally wounding 22 men and injuring another 107.

"All of a sudden we heard this huge explosion and the ship started rocking back and forth," Medina said. "Someone said, 'We're sinking!' and my blood turned cold."

Although the ship had been hit with a plane, Medina says the seamen below deck weren’t allowed to leave their posts and go topside.

"We were in the compartments below and every hatch had somebody with a pistol," Medina said. "So we tried to run out and this guy brings a pistol out and says, 'The first S.O.B. that opens that hatch, I'm going to shoot him.' So right away, we stopped."

After Medina and the others waited for 30 to 45 minutes, they were allowed to go up to the deck. He says he volunteered to help the medics gather the remains of dead sailors for burial at sea. The wounded were evacuated to the Pinkney (APH-2).

One body, Medina recalls, had tears in his eyes, but wouldn’t move or respond to Medina's words.

Medina says the only time he felt scared was later that night, after gathering his fallen comrades.

"That evening, I got sick to my stomach and threw up," Medina said. "That's the only time I felt ill. What I had seen made me sick in the stomach."

After two days of repairs, the ship returned to duty.

Medina says he’d never heard anything like the gun batteries firing from the Tennessee.

"It was a heck of a noise," he said. "It was a big boom. It could knock you down if you weren't holding on to something, because it shook the boat. You always had to be holding onto something."

The Battle of Okinawa, which began March 26, 1945, was one of the last campaigns before the peace treaty marking the end of WWII was signed on Sept. 2, 1945. The island of Okinawa, 350 miles from Japan, provided the United States with airbases for raids against Japanese islands and its mainland.

Medina served throughout the war: Two months after the attack on Pearl Harbor, he’d enlisted in the Navy. His father encouraged him to join because Medina's uncle had been a sailor.

Medina says he went through 14 days of boot camp. On the 15th day, he went to Treasure Island -- in the San Francisco, Calif., area -- and on the 16th day he boarded the USS Tennessee.

The 624-foot vessel was Medina's home for the next three years and nine months, until Medina was honorably discharged from the Navy.

While the Tennessee, first commissioned as a battleship on June 3, 1920, was being overhauled off the coast of San Francisco, Medina went to school for three months at night to learn how to operate radar equipment.

Although few Latinos were aboard the ship, he says he never felt belittled because of his ethnicity; however, he says it was his ethnicity that kept him from being promoted.

"I was a seaman for four years. Everybody advanced in rank but me," Medina said. "I tried to ask for a transfer off the ship, but they said they needed me. I did my duty. I did my job."

Born in Ray, Ariz., Medina says he thinks his actual birthday is August 5, 1921, instead of 1922, which is what his records say. He believes his mother made a mistake on the forms.

When Medina was 3, he moved with his mother and father to Hawthorne, Calif.

His parents were separated when he was 10, so Medina moved with his mother and older sister to Los Angeles. His father stayed in Hawthorne.

"Everybody [in Los Angeles] was poor. I don't know how we did it, but we managed," Medina said.

His sister cleaned houses and his mother washed silverware at an athletic club. Medina dropped out of high school in 1940 to work as a delivery boy in downtown Los Angeles, earning $25 a week.

"I gave all my money to my mom," Medina said. "All I did was have money to go to the movies, but my mom could buy anything she wanted."

Medina soon applied for a job with Douglas Aircraft in Santa Monica, Calif.

"I went in on Monday and got a job on Monday. I told them, 'What do you want me to do? I can do anything you have in here,'" Medina said. "I told them I used to work on planes, but I never touched a plane in my life. I got the job and I stayed there three years."

Medina says he and Emma fell in love through their letters.

"She said, 'I miss you, I love you, please come back to me,' and all that good stuff," Medina said.

Medina says his first marriage was hard because he was working and going to school at night, so he’d be away from home for 10 to 12 hours each day.

He went to an employment office and asked the interviewer if she had a job for him.

"She showed me to Davis-Monthan Air Force Base, and they hired me right away as a radio technician," Medina said. "I told [my interviewer], 'Now I'm going to marry you.'"

Medina says he’d like to see more Latinos attend and graduate from high school and college.

He says he learned much about himself from his time in the Navy.

Mr. Medina was interviewed in Tucson, Arizona, on January 5, 2003, by Ernesto Portillo.