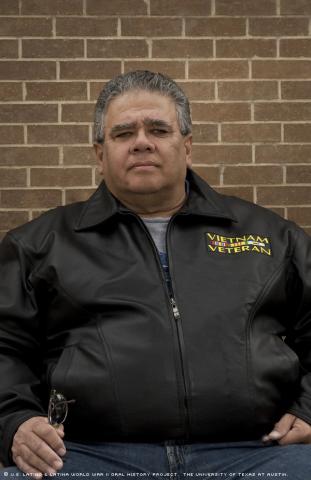 James R. Rendon, born and raised in Laredo, Texas, gave up his last semester of high school and enlisted in the Marine Corps with no hesitation to serve his country in Vietnam.

Rendon, who enlisted on April 15, 1967, said he felt there was nothing else for him to do because a lack of resources meant that for him, like many other Hispanics, a higher education was not possible. He looked to the military for guidance and opportunity.

“I thought I was headed the wrong way so I wanted to change my act and be a better person and join the Marine Corps,” he said.

He left behind his mother, Manuela Rendon, and three brothers. His father had died on May 25, 1963, after suffering a stroke that put him in a coma.

Rendon traveled to San Diego for basic training. Rendon said that when he enlisted he knew nothing about the Vietnam War or the physical training that was required to prepare for battle.

“It was a rude awakening when I got to San Diego, Calif.,” he said.

During the sixth week of his eight-week training course, he broke his left ankle. As part of his recovery, he worked in hospitals at the Marine Corps Recruiting Command in San Diego. Once he fully recovered, he began his eight weeks of training from the beginning.

After completing the training, Rendon was immediately sent to Vietnam in December 1967. He was assigned to Company B, 1st Battalion, 5th Marines, 1st Marine Division.

The living conditions of Vietnam were unforgettable. The Marines were constantly on the lookout for danger and wore their clothes until they were no longer wearable. They resorted to creeks and rivers for drinking water and for bathing. They ate the canned foods that were sent to them.

Although the camps were supposed to be desegregated, the troops segregated themselves by racial groups. However once on the battlefield, all racial tensions were dismissed, Rendon remembered.

“When everyone was in the bush, everybody was the same color,” he said. “We’re all Americans.”

Rendon faced a major scare on Feb. 22, 1968. During street fighting with two other Marines, a B40 rocket came in through the window of a house they had entered. The explosion injured all three of the men, and they were sent to different locations in accordance with the severity of their wounds. Rendon was the least wounded and was sent to Cam Ranh Bay, in South Vietnam. The other two Marines were sent to Tokyo.

Rendon was discharged on Dec. 26, 1972, with the rank of E4. He returned to Laredo, Texas, on Jan. 15, 1969. However, Vietnam didn’t leave him. He was diagnosed with 40 percent PTSD, or post-traumatic stress disorder. He recalled all the men who died for their country along with the men that they killed.

“There were no friendly lines,” he said. “Each time, you went out to find an enemy or have them find you.”

Although he was proud of his accomplishments, he was not proud of the lives he took. He had never previously talked about the war or the number of people he killed.

For his service, Rendon was awarded the National Defense: Vietnam Campaign, Vietnam Service, Purple Heart, and the Navy Achievement Medal.

He continued his commitment to the Latino population as a way of fighting the inequality he faced throughout his lifetime. He assisted with fundraisers to help send a group of Laredo veterans to Washington, D.C., to view the Vietnam Veterans Memorial Wall.

Rendon urges younger generations to “receive an education, get married, have a family, be productive, help your community, worship your God, and do good in life.”

He was always proud of his country and those who have served it. “When you see a veteran, thank them for their services,” he said. “If you’re a veteran, thank yourself, feel proud that you’re an American, just be a good person.”