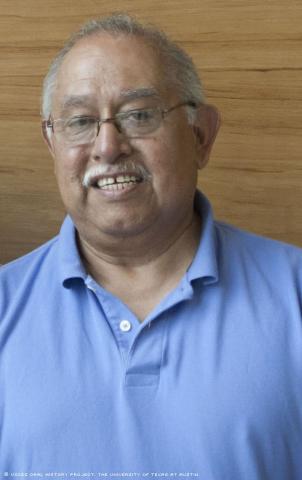 James Ramirez remembers a time when Mexican- American communities held dances to pay for the poll tax in Austin. He would ask himself, "Why do people have to pay to vote when it's their constitutional right?"

By the time he was eligible to vote, at age 21, the federal government had outlawed the poll tax. But Ramirez saw that Mexican- American faced other hurdles when it came to voting and political participation. He dedicated his life to getting his community involved in campaigns to exercise their rights.

He helped organize the Austin Hispanic community to fight for better circumstances and to get leaders who represented them into public office. Behind the scenes, he worked on political campaigns for people running for offices ranging from justice of the peace to county commissioner to U.S. representative. Along the way, he assembled a network of friends and allies.

"I made a lot of friends," he said. "They all respect me and talk to me, even if we ran against them."

Ramirez, born in Austin on Dec. 26, 1946, was raised by his Mexican-born grandparents, Jesus Gomez and Josefa Ruiz Alemán. His grandfather, a native of the border town of Piedras Negras, Coahuila, was a laborer for the railroad and later shoveled coal for Desendorf Marble Co., earning $27 a week. His grandmother was a homemaker. While his grandfather was strict, Ramirez always had his grandmother's heart.

"She was always on my side," he said, speaking fondly of his grandmother.

Ramirez said his mother left him and his two siblings with her grandparents after she married because his stepfather-to-be wanted to have his own children and begin his own family. But she lived nearby and saw him and his siblings daily, he said.

He did not know his father. But his grandmother always told him that when he did meet his father, he should shake his hand and say, "Thank you for giving me life."

When Ramirez was 25 years old, he was at a bar hosting a fundraiser for postal workers. A man approached him.

Edward was his older brother. Father and son sat at the bar and talked for hours. Ramirez said he was just glad to be able to fulfill his grandmother's wish.

Ramirez's childhood was pleasant even though he was poor. He remembers playing barefoot outside when he was young, wearing shoes only when he went to school and to church.

His brother, Edward, raised pigeons and parakeets; the family also had two dogs and a pond filled with ducks and fish. Neighbors described the family's backyard as a "zoo."

Ramirez said when he went to school he wasn't allowed to speak Spanish. Spanish was his first language, but he had learned English from reading the end credits of his favorite TV shows.

Language still posed a problem sometimes. When he was in the first grade, he and a friend were outside play-fighting with sticks. A teacher overheard them speaking to each other in Spanish; she took the sticks from their hands and started hitting them with the sticks.

"That's when I knew people don't like you talking in Spanish," he said.

Later, he used that memory to relate to the concerns of his community, empathizing with parents about how children were treated at school for knowing only Spanish.

His mother insisted that young James go to summer school starting in seventh grade to keep him out of trouble. And he did well; in high school, he was in advanced classes and was very good at math. But by his senior year, he had put college out of his mind. He said that if his grandparents and parents had guided him, he might have studied architecture, but they just weren't involved.

"You graduate; you go to work," his grandfather would say to him.

He graduated from A.S. Johnston High School in 1965, shortly after joining the Marine Reserves. That summer, Ramirez went to boot camp and had a chance to travel the country.

From his time in the military, Ramirez learned that his Hispanic community was not alone in its struggle: Hispanics had it much worse in some places in Texas. He recalls that his relatives in the south part of San Antonio and in the town of Garfield "had a harder time than we did."

He said it was very difficult to find a job when he returned home from boot camp and training in December 1965. He applied for jobs with the city and at private companies, and they all said the same thing: They weren't hiring. But he suspected that his ethnicity had something to do with it.

He finally got a job doing repairs at Glastron Boat Co. through his brother-in-law, Benny Luna. Later, he worked at Walter Tips Co., a hardware company. He said his fellow employees worked five days a week, cashed their check at the end of the week and bought beer, then started all over again on Monday.

Ramirez said he couldn't continue working those kinds of jobs. He aspired to a higher calling: helping the men and women who worked alongside him. He said the pay was often $1.25, and "that was if you're lucky." The workers were often people without an education or ex-convicts who didn't think they could do better. So he set out to make a difference.

He got a job at Volt Technical Corp., a workplace consulting firm, in the 1970s. Volt had gotten a contract to produce training materials for Vista volunteers and Community Action Program staff, a federally funded anti-poverty organization. Ramirez's job was to send out the material.

When Ramirez started working for the East Austin Neighborhood Center, he learned to organize from the ground up. He said you have to organize around a common concern you see in people.

In those years, Ramirez also started becoming involved in electoral politics. In 1972, he assisted local activists John Treviño and Gonzalo Barrientos in promoting the vote for George McGovern's presidential campaign.

Ramirez went on to volunteer for the campaigns of Treviño and Barrientos, who ran for Austin City Council and the Texas Legislature, respectively, as well as that of Richard Moya, a candidate for Travis County Commissioner. He put up signs and distributed leaflets in support of these campaigns.

Those men, Ramirez said, along with a handful of others, were courageous enough to run for public office during a time when money and bureaucracy determined who was elected. Those elected to office became community leaders; traditional leaders had been the business class, people like Roy Velasquez, who ran a cab company.

"The businessmen were the ones in the community that did anything for their neighborhood," he said. "You always had to go to them."

The early campaigning experiences showcased Ramirez's organizing and politicking skills. Other politicians sought him out. In 1974, Bob Perkins asked Ramirez to manage his campaign for justice of the peace. They worked out of Rabbit's Lounge, in East Austin, after its owner Rosalio "Rabbit" Duran said they could use a space upstairs.

"Instead of the storeroom, we called it the second-floor suite," he said.

When other Hispanic people asked why he was helping Perkins campaign even though Perkins was white, he would say, "Wouldn't you rather have an attorney for JP?"

In the following decade, Ramirez worked on campaigns for a variety of local politicians including Margaret Gómez, who eventually became the first Mexican American woman to serve as Travis County commissioner, Precinct 4; Juan Duran, who won the 1983 election for justice of the peace in that same precinct; and Lena Guerrero, in a campaign for Texas Railroad Commission.

He also landed a job in Bob Bullock's comptroller's office, working in the claims division from 1975 to 1983. He said Bullock told him that he needed "some color in there." He was the only Hispanic in his division. For the first six months no one would talk to him, not even his supervisor, out of fear that he would report them to Bullock.

"I had to sit down with my supervisor and tell him that I wasn't there to start any problems," Ramirez said. "After that we got along."

Years later, he was recruited to work for J.J. Pickle's congressional campaign in 1986.

"I learned more from him than anybody else," he said of Pickle. "He taught you how to treat people."

One example was when a woman stopped Pickle and told him that 10 years earlier Pickle had helped with her brother's veterans benefits. Pickle immediately remembered the man's name and some of the details. The woman was amazed that Pickle would remember.

After years of working on campaigns and in the community, organizing people around candidates and causes, Ramirez was burned out. Ramirez said his biggest regret was not developing young people to follow in the steps of the leaders whose campaigns he managed.

His best advice: Connect with the people on the ground, advice his mentor J.J. Pickle gave him.

Mr. Ramirez was interviewed by Britini Shaw in Austin, Texas, on April 13, 2014.