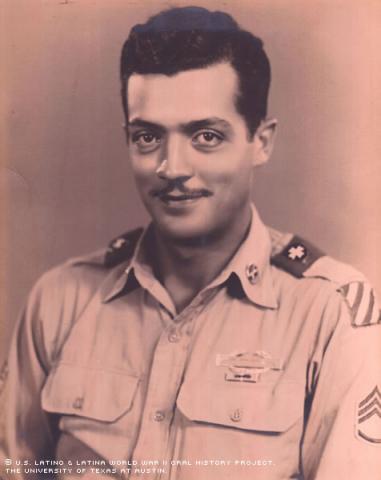 Ismael Nevarez was headed west across the Pacific Ocean aboard a troopship in early August of 1945. Countless other United States Navy vessels surrounded him as far as the eye could see, and they were all headed in the same direction.

With the Port of Seattle out of sight, this 19-year-old from a tiny village in Puerto Rico received the official word: He and his fellow soldiers were to take part in the invasion of Japan.

The news didn’t come as a total surprise. After all, Nevarez’s training soon after Army boot camp dealt with a task that forewarned of the mission.

“The training we had was mostly collecting bodies,” explained Nevarez of his time spent during quartermaster training in Puerto Rico. “We were to identify them, save one of their dog tags and bury them.”

Nevarez says he knew the fighting would be brutal.

With thoughts of the combat still to come, five days into the journey everyone assembled on the ship’s deck for news that wouldn’t only change their mission, but the course of World War II and conflicts to come.

“They told us that they dropped the atomic bombs on Hiroshima and Nagasaki, and that the war was over,” Nevarez said.

In an instant, anxiety turned to exhilaration for Nevarez and the thousands of men aboard all those ships in the middle of the ocean.

“When they gave us the news – big party,” he said with a grin.

But Nevarez’s service wasn’t over yet. The day after the big news, all the ships except one had reversed course.

“None of them were left except us,” he said. “It was just our ship still headed west.”

Two days later, they ended up on the island of Okinawa, the scene of fighting between American and Japanese forces months earlier. More than 250,000 people lost their lives, including about a third of the civilian population.

“Okinawa was all destroyed,” he remembered. “Not a single tree was left standing.”

In fact, it was so destroyed their ship couldn’t dock at the port. Instead, they had to make an amphibious landing.

“The shores were still smoking,” he said of the eerie landscape. “Our ship had to stay about 10 miles off shore.”

Once on land, the mission would be vastly different from what they had originally planned to do. Instead of collecting bodies, they now collected supplies, establishing a supply depot for the entire Pacific area.

“Clothing, food, anything you could think of, we had it,” said Nevarez of the post-war supplies U.S. forces and a now struggling Japanese Empire would need.

While combat was officially over, that didn’t mean the soldiers from Puerto Rico, and the other American troops, wouldn’t suffer hardship: During the assignment at Okinawa, a typhoon hit.

“It blew down all our tents,” he said. “We had to get the entire company together again.”

Six months later, they were headed back home to Puerto Rico and discharged from their service.

“The agreement was the length of the war, plus six months,” said Nevarez of the terms of enlistment back in September of 1944.

Barely a year and a half after basic training, Nevarez was ready to pick up where he left off in his native homeland. But little did he know, he was only at the beginning of a long and distinguished military career.

“I was going to use the GI Bill of Rights,” Nevarez explained. “I wanted to study construction engineering.”

But to do that, he needed additional math credits. So, despite graduating from high school two years earlier, he went back to get the credits and fulfill his dream, which only his military service and subsequent benefits could make possible.

Along the way, fate played a part in changing his life’s direction, however. First, the engineering school was full. And then, the Veterans Affairs Office came up with a plan that only required two years of education in order to obtain an accounting degree.

But he got ill right before the registration deadline of the second year and missed it. By now it was 1948, and a young woman named Olga Nieves was in his life; however, she and her sister were about to move to New York City in search of opportunities.

“I followed her there,” said Nevarez, opting not to wait around for months until the next school registration period. He needed an immediate job opportunity, and hoped New York would provide it.

“I worked for a plastics company making purses,” said Nevarez of his first job. “Then I worked for another company that set up displays in store windows.”

But Olga’s sister became ill and the two young women returned to Puerto Rico, leaving a lonely Nevarez considering his possibilities. He opted to head to the recruiting station and re-enlist in the Army.

So in 1949, Nevarez found himself at Fort Mammoth, N.J., training in the field of communications. The eight months of course work covered high-speed radios, Morse code and voice equipment. And the timing couldn’t have been better: The U.S. government was in the process of clearing the area in and around Cape Canaveral for a launching area for space rockets. Nevarez and a select few were assigned to help with project communications.

But when the job was done, he returned to Fort Mammoth only to discover his company was gone.

“That’s when the Korean War broke out,” Nevarez said.

Nevarez was in South Korea a week later. And unlike his WWII experience, there was no peace before arriving to his destination, as he immediately joined the Third Infantry Army Division.

Then, in September of 1950, his brother, Jacinto, was assigned to the all-volunteer Puerto Rican 65th Infantry Regiment.

“I wanted to serve with him,” Nevarez explained. “So I put in the paperwork.”

A month later, they were together in the 65th’s Company A, but Nevarez soon began to understand that should their company come under heavy attack, both he and his brother could be lost. So the communications specialist ultimately transferred again, this time to battalion headquarters.

“It was a little safer, but not much,” Nevarez said.

On several occasions, he came close to losing his life, including one instance that earned him the Bronze Star.

“We had established a line,” Nevarez remembered. “Somebody yelled, ‘The Koreans are here!’ Everybody started running.”

Everybody except for Nevarez and a fellow enlisted man, who were in line to get another cup of morning coffee.

“The guy wouldn’t give me no more,” said Nevarez with a laugh.

Then he noticed their colonel was still in his tent, and still dressed only in his underwear. In the meantime, everyone else had all but cleared out of camp.

Nevarez and the first sergeant with him stayed behind until the colonel got dressed.

“The first sergeant and I had dug a little hole for our tent, and it was like a trench,” Nevarez said. “So we went in the trench, standing guard as the colonel got dressed. Then we got his tent, we all got in the jeep and ran.”

And as they sped off, the three suddenly noticed something to their side that had been left behind: The coveted coffee was sitting in the middle of the field.

“The colonel said, ‘Get that,’ Nevarez said.

In fact, he kept re-enlisting. Now a sergeant, at the end of each enlistment, he’d get to return to Puerto Rico for a month’s vacation. But in between those vacations, he’d serve all over the world, including in Taiwan, Iran and Paraguay. Along the way, he’d also become a dad, with a daughter and son to make his life experience complete.

After 21 years in the Army, and the Vietnam War now in progress, Nevarez was ready to end his military career. It was at New York’s Fort Hamilton, and only there, that he knew he’d be properly debriefed as he entered civilian life for good.

“That’s where I learned what I had to do when I got out of the gate,” he said. “If you retire somewhere else, they don’t tell you what to do.”

And while this would be the end of his military service, he’d continue to proudly serve his country as a postman in Puerto Rico with the U.S. Postal Service from 1969 to 1982. Today, he and Olga have retired in San Antonio, Texas, a place he liked during a temporary duty assignment years earlier.

He wants young people to know that given the choice, he’d do it all again.

“Everybody has to realize that we live in a country that needs to protect itself,” Nevarez said. “And you should honor you country no matter where you are.”

For Nevarez, that means even on a small farm in Puerto Rico, where his American dream began.