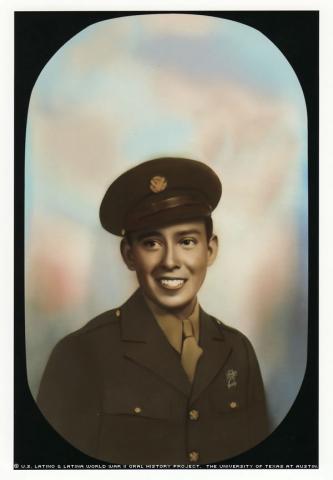 As his unit hit the beaches of Guadalcanal, a small island in the South Pacific, 18-year-old Isidro Ramos witnessed for the first time the bloody price of war: dump trucks full of Marines’ bodies “stacked up like wood,” Japanese soldiers littering the ground.

A moment of insight washed over the private first class that day in 1942 as he said to himself: “There really is a war.”

More than sixty years later, Ramos says he was glad to serve, but has mixed feelings about the experience. He notes differences between then and now in the tools of combat.

“War was terrible,” Ramos said. “Nowadays there is a lot of bombing.”

In his day, they generally used hand grenades as explosives.

“It’s not like you see in the movies. It’s a lot different. In the movies you’ve got Sylvester Stallone and all that. But it’s not like that,” he said. “I saw a lot of things that were horrible. They told us no prisoners.”

Ramos’ war service was starkly different from his home life as a child. Born and raised in Martindale, Texas, a small town 35 miles south of Austin, he was scantly prepared by the farm of his childhood for the atrocities of World War II. His father, Estaneslado Ramos, a Mexican immigrant, was a farmer who grew cotton, corn and, sometimes, other vegetables; his mother, Tomasa Contreras Ramos, also a Mexican immigrant, was a homemaker, but ran a small restaurant for a short while. Ramos had six siblings: José, Pedro, Antonia, Josefa, Cruz and Avelina. (Jose, Pedro, Antonia and Josefa, all older than Ramos, were half siblings, as they were his mother’s children from a previous marriage.)

Ramos says all he remembers from his childhood is working. After his father died when he was 6 years old, Ramos and his mother moved 11 miles east to Lockhart to farm with José and Pedro. While in Lockhart, Ramos started attending St. Mary’s Catholic School and continued through the third grade. It was after third grade when Ramos had to quit school to start working again to help out the family.

“We didn’t have much money,” he said. “We were kind of poor and struggling.”

At 16, Ramos left home to enter the Civilian Conservation Corps. CCC camps were set up all over the country to create jobs after the Great Depression as a part of Roosevelt’s New Deal. Many of them were construction jobs, including the work Ramos did at Lake Austin.

“I spent almost two years in the CC[C] camp building roads, buildings and bridges,” he said.

Austin was a different kind of city than Ramos was used to. In Lockhart, he says he saw all sorts of prejudice heaped on Latinos; however, he witnessed little in Austin.

“There was discrimination in the schools, but we could go in with white people at restaurants,” Ramos recalled. “There was still discrimination in Lockhart, even when I came back from the war. A lot of stuff, like theatres, [were segregated]. When Kennedy got elected, that’s when everything changed.”

While in the CCC camp, Ramos learned valuable construction skills he’d later employ after the war. At 18, he and the rest of the boys were sent home when it became apparent they’d soon be drafted.

“They [CCC officials] told us [the government was] going to be calling us in,” Ramos said. “So we got discharged and then all of a sudden we got notice that we had to enlist.”

Ramos says he wasn’t afraid to go and didn’t want to stay. There was nothing for him in Texas at the time, he explains, and he was ready to see the world.

“I was kind of glad, and I didn’t feel like I didn’t want to go,” Ramos said. “I wanted to go because I wanted to see something different.”

Though Ramos had never left Central Texas before, he began his journey by reporting to Fort Sam Houston in South Texas’ San Antonio for necessary screenings and paperwork. While there, he faced an unforeseen obstacle during his physical: When it was his turn, the doctor checked him over and noticed the limited range of motion in his left arm. Ramos explains he’d broken his elbow when he was about 6 years old, but that it didn’t hurt or bother him. The doctor, still unconvinced, sent another soldier to fetch a bucket of sand. He had Ramos lift the sand with his arm repeatedly to make sure he could use it properly.

“I could have stayed out of the war if I wanted to,” Ramos said. “Finally they said, ‘You’re a soldier. You pass.’”

With the OK to move forward, Ramos was sent to train at Camp Roberts in San Miguel, Calif. There, he received training as a rifleman.

“Part of the training was shooting rifles and combat; it was nothing special at all,” Ramos said. “They told us if we didn’t hit the mark, they would ship us overseas, so we all did. In other words, they tricked us.”

Now that Ramos was a trained rifleman, he couldn’t escape the inevitable orders to be shipped overseas.

The boat landed at New Caledonia, a small island near the Philippines, and soon Ramos was given orders to load up again. When his unit shipped out to Bougainville, and after that, Manila, Ramos saw the real face of the war.

“The Japanese bombed every night. … That’s when we started getting scared. We saw dogfights between P38s and Japanese Zeros,” he said, referring to air combat. “That’s the first thing I remember seeing, and I’ll never forget it. It was horrible.”

Ramos says he was plagued with nightmares right after the war, but that they gradually stopped; however, he and his fellow soldiers weren’t too scared while in the Philippines, maybe because they didn’t really think about what was going on, he says.

“At first I had a lot of nightmares that I was still in battle,” Ramos said. “We were not afraid. We were just going to fight, and some[times] we didn’t come in contact with the enemy for weeks. I was glad, but I don’t think I was real afraid.”

Just when his unit was getting ready to head toward Japan, atomic bombs were dropped over Hiroshima on August 6, 1945, and Nagasaki on August 9, 1945, and the war was over.

Private First Class Ramos was honorably discharged from the Army on Dec. 24, 1945, in San Francisco, Calif. He earned a Bronze Star, Good Conduct award for the Asiatic Pacific Campaign, WWII Victory Medal, Combat Infantry Badge, Philippine Liberation Ribbon, two Bronze Service Stars and an Honorable Service for WWII Lapel Pin. When he arrived home, he says he was surprised by how much had changed yet remained the same for Latinos in Texas.

“What I saw in Lockhart was kind of bad,” he said. “There was a little discrimination [in Austin], but not the same that there was before.”

He was more pleasantly surprised, however, by the welcome he received upon his return to Central Texas. He met his future wife, Victoria Lopez, that day in early 1946:

“[The] day [I] returned from service she waved,” wrote Ramos after his interview.

“What a way to welcome us home,” he recalled telling her, to which she responded, “I’ll meet you tomorrow and give you a hug.”

Vicky made good on her promise, and in November of 1947, she and Ramos got married.

Now that Ramos had spent time serving his country abroad, he went back to work in what he knew best: construction. He labored mainly with cement, making sidewalks, driveways and foundations, but says he also did some farming, as well as had some warehouse employment in Austin with Frostex -- where he toiled on the loading dock -- and merchandise-receiving work in Austin with Kraft and Southwest Cold Storage.

“I went back to construction work because it’s all I could do,” said Ramos, adding that the latter employment was an improvement: “Cold storage was better than construction because I was working inside.”

The Ramoses had their first son, Joe, in 1948 and their second son, Gabriel, in 1949. Both men continued in their father’s footsteps and enlisted in the Navy; Joe served for 6 years, Gabriel for 8.

Since his return from the war, Ramos says he has noticed the advancements Latino people have made toward equality.

“I don’t think there’s any more discrimination,” he said. “But I think about all the stuff I went through and I’m glad … because there’s not the kind of discrimination there used to be.”

Though Ramos was happy to enlist at first, he says he wouldn’t do it over again, yet adds that he doesn’t regret having gone.

“It was an experience, but I don’t think I’d like to go back,” Ramos said. “It’s rough. You live from one day to the next, and you don’t know what’s going to happen tomorrow or even today. I’m still kind of sad thinking about those other guys, but what can I say? It happened to a lot of people.”