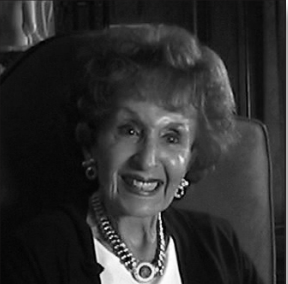 Irma Nicolás is the daughter of a Mexican-American media pioneer. Her father, Raoul Cortez Sr., founded the country's first full-time Spanish-language radio station and went on to start a Spanish-language television station that later became the operations center for the SIN television network and Univision. He also was president of the League United of Latin American Voters for two terms and a strong advocate for issues important to Mexican Americans. He instilled in his children a deep pride in their Mexican heritage. Nicolás said she learned Spanish before she learned English.

She recalled joining her father when, as LULAC president, he arranged bus tours across Texas. Irma, his youngest daughter, recalled one painful incident in New Braunfels during the 1940s. The family went into a local restaurant, which agreed to serve her. But "they wouldn’t allow my mother or my sister because they had darker skin than I did. We would all walk out and go to the next town. We just kept on going until we got to El Paso, and it was the same story. As Mexican-Americans, we were discriminated" against. "And this is why my father took it [his radio broadcasting] very serious ... to educate our own people," Nicolás said. "Daddy believed in his people."

Raoul Cortez had a vision far larger than just buying time on other stations: He wanted to provide a voice for Mexican Americans in the U.S. “He had big, big dreams,” Nicolás said. In 1946, three years after Cortez applied for a license from the Federal Communications Commission, KCOR-AM (1350) went on the air. In 1955, he launched KCOR-TV, a San Antonio television station that also broke ground by broadcasting news and entertainment in Spanish. It was the first full-time Spanish-language station int the U.S.

Cortez was born in 1905 in Xalapa, the capital of Veracruz, in eastern Mexico. He was one of eight children. He went out on his own as a young man, selling produce out of a wagon in Mexico.“He sold fresh eggs, fresh vegetables, and that’s how he made his ends meet,” Nicolás said. He later moved to San Antonio, working as a window-dresser for the Penner's men's store, a reporter for La Prensa and a salesman for Pearl Brewery. Around 1940, he began buying time on KMAC-AM, an Anglo radio station, broadcasting entertainment programs in Spanish and selling ads. Cortez and his wife, Genoveva Valdez, had three children. Their first two, Raoul Jr. and Rosamaria, were born in Mexico. Irma was born in San Antonio on Sept. 12, 1932 -- the first U.S-born member of her family. When Genoveva became ill and required several surgeries, doctors recommended she move to a cooler climate to recover. She moved for several years to Saltillo, in Mexico, leaving Raoul to raise the three children by himself. Raoul Jr. was sent to St. Edward's High School, a boarding school that shared a South Austin campus with what is now St. Edward's University. Cortez enrolled his daughters at St. Teresa’s Academy, an all-girls Catholic boarding school in San Antonio. Most of the students were Hispanic, and most of the nuns were from Cuba or Spain. "I was a very mischievous child in boarding school,” Nicolás said. “But I enjoyed it so much. ... We had a lot of laughter and I made a lot of friends.” She later went to college for a year and then took business courses. Once a month, Cortez came to the academy to take his daughters home or to visit their mother. She eventually recovered and returned home.

Meanwhile, Cortez was building his media business and becoming more involved in LULAC. After serving as San Antonio district president, he became national president in 1948 and 1949. As San Antonio president, Cortez oversaw a landmark school desegregation lawsuit in Texas. As national head of LULAC, Cortez met with President Harry S. Truman and Mexican President Miguel Alemán to improve working conditions under the Bracero Program, a U.S.-Mexican initiative which covered Mexican migrants who came to the U.S. to work in agriculture. He also was president of the Charro Association, which continues the tradition of Mexican horsemanship. “He loved horses and his charro outfit," Nicolás said.

Irma and her sister participated in La Feria de las Flores, a LULAC scholarship pageant for young girls, for several years. There was also an annual Black and White Ball, where girls would come out as debutantes. Her older sister was scheduled to debut at the event one year but backed out a month beforehand. The director suggested that Irma take her place. So Irma debuted when she was only 13 and became the queen of the ball. That was also the night she met her future husband, Emilio Nicolás. “He asked me to dance,” Nicolás said “I dropped my escort, and I danced with Emilio all night long. He sang in my ear, 'La Vie En Rose,' in French ... then he sang 'La Mer' ... so those are our two songs."

Emilio Nicolás, a native of Mexico, had earned a bachelor's degree in biology and chemistry from St. Mary's University and later a master's in biology from Trinity University, both in San Antonio. His first job was with the Southwest Foundation for Research and Education (now the Texas Biomedical Research Institute), also in San Antonio. Her mother approved of the match, but it took several years to win her father's blessing. Irma Cortez and Emilio Nicolás finally married in 1953. In 1955, Emilio left his research job and began working for Raoul Cortez at the television station.“It was a hard job,” Irma Nicolás said. “Coming from being a research man to radio and television, he had to learn from scratch. He worked himself up, and he had a good relationship with my father.”

Emilio Nicolás and Cortez built up their media business, continuing to broadcast news and live shows in Spanish. Cortez would bring in musicians and actors from Mexico to perform live at a San Antonio theater and on the air. He had writers create scripts for radio novelas and later telenovelas -- soap operas that were extremely popular with Latino audiences. In 1961, Cortez sold the television station to his son-in-law and other investors, who gave it a new name: KWEX. They later started other stations across the U.S., the seeds of what eventually became Univision. Raoul Cortez died in 1973, leaving an important legacy of broadcasting tailored to the interests of Mexican Americans.“My father took [Spanish broadcasting] very seriously to educate our own people,” Nicolás said. “They should defend themselves. The airwaves are ours, and we have the right to defend our Mexican-American people.”

The Nicoláses have two sons, Emilio Jr. and Guillermo; and a daughter, Miriam. Irma and her husband also have a real estate investment business with their sons.

(Irma Nicolás was interviewed by Laura Barberena in San Antonio, Texas, on June 1, 2012.)