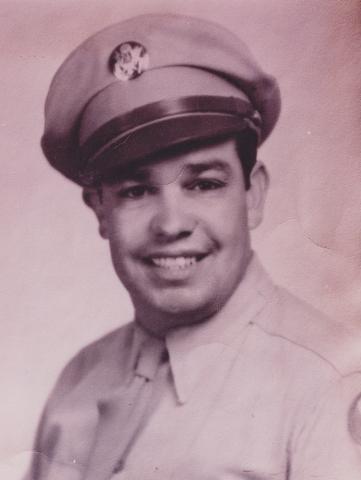 Ignacio Vindiola was 27 years old when he joined the Army Air Forces and was assigned the job of radio operator aboard bomber planes. He was old enough to understand that those bombs being dropped over cities would hurt innocent civilians as well.

According to information provided by Vindiola's granddaughter, Mary Araza, he was thankful that he never had to confront what the ground troops faced, that he never had to see the faces of those he killed –- and that helped him deal with the sadness he felt when the atomic bombs were dropped.

Born May 5, 1916, in Dos Cabezas, Arizona (about 70 miles east of Tucson) and coming of age during the Great Depression, Vindiola developed a strong work ethic, according to Araza. He lived briefly in Gleeson, Arizona, and later in Douglas, a predominantly Mexican-American town on the Arizona-Mexico border that he called home the rest of his life.

In Douglas, his mother, Guadalupe Leon, owned La Fiesta restaurant, where she fed those who were without food during the Depression. According to Araza, many would later say Vindiola got his generous personality from his mother.

Vindiola, also known as "Nacho," had two sisters, Chalita and Bertha; and a brother, Santiago. They all ran six blocks from school to the restaurant during lunch break to help their mother run the restaurant.

The Vindiola children were a musical family, and played instruments such as the piano, clarinet and saxophone. The four siblings combined their musical talents to play in their mother’s restaurant.

Vindiola favored the trumpet, and he played so well that even after five years of not playing while serving in the military, he could still pick up the instrument and play just as beautifully as before.

Music eventually became a full-time endeavor. Vindiola and his brother formed their own band and performed "all over" for short periods of time.

On one occasion, they were asked to play a Glenn Miller song eight times. The song was filled with high notes that made it harder to play, and when the ninth request for it came in, one female member of the accompanying band made a bet with Vindiola: If he could still hit that high note, she would owe him a case of beer -- which he changed to pop when he told the story years later to his granddaughter. In the end, he hit the high note with ease and claimed his prize.

Vindiola's musical career not only brought him professional success but also led him to the love of his life -- Josie Valenzuela, a dancer for the band. They married before he left to serve in World War II and stayed together through the war and beyond.

Araza said her grandfather and Santiago enlisted together in 1943 out of a sense of obligation and their love for what the country had done for them.

In 1943, Vindiola was sent to Kansas City for boot camp, and then to Atlantic City, New Jersey, for radio operator training. Finally, he shipped out to Okinawa.

Araza said Vindiola's jobs in the Army Air Forces were to operate the radio and drop tin foil out of aircraft to confuse Japanese radars. He told his family he feared flying, especially because they were constantly over the ocean and he was afraid they would run out of fuel. There were a few close calls.

He also recalled observing the poverty and horrible living conditions of civilians in Okinawa. Araza recounted one of his stories, in which he gave candy and played with local children.

While discrimination against civilians disgusted him, what really disturbed him was what he called the needless deaths that he saw every time the bombs were dropped. Though the Allied planes specifically targeted Japanese military bases, they sometimes hit civilians nearby.

After returning to civilian life in Douglas, Vindiola experienced post-traumatic stress disorder (PTSD), although he never discussed it openly. All he told his family was that he had gotten better.

Aside from running the family restaurant, Vindiola worked at the Grand Theatre in town and later became a postmaster. He was also an accountant for the local credit union.

The Vindiolas were highly involved in the American Legion. He kept in touch with the men in his unit, with whom he had a strong kinship, for many years. He grew sad when the calls became fewer and fewer. At the time of his death Aug. 25, 2005, he was one of the last members living.

This tribute is based on information provided to the Voces Oral History Project by Mr. Vindiola’s granddaughter, Mary Araza.